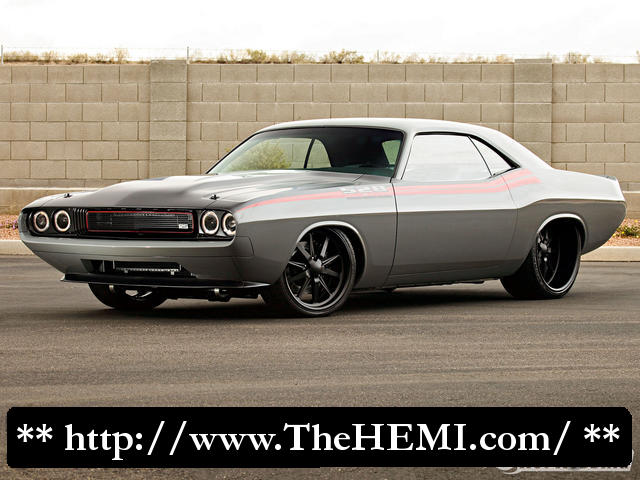 
At first, the reservation with which Jeremy Gerber speaks about his utterly wicked '70 Challenger seems a bit peculiar. After all, this is a machine encased in artfully sculpted sheetmetal that packs a 730hp all-aluminum Hemi, a Tremec five-speed, humongous brakes, and a trick independent rear suspension. As our conversation continues, it suddenly hits us. That's not a lack of enthusiasm in his voice, but rather an aura of quiet confidence-the kind of confidence that can only come from playing in a different pantheon of competition. Along with his dad and his brother, Jeremy spends his days building high-end street rods at the family business, the Roadster Shop (www.RoadsterShop.com). Although enthusiasts often criticize street rods as nothing more than outrageously expensive manifestations of rich guys' egos, there's no question that they represent the pinnacle of hot rodding craftsmanship. Applying those same skills to a muscle car has created quite a machine, one that exudes the same understated confidence as the crew that put it together.

Not to be overshadowed by the sultry skin, the Challenger's mechanical pieces are equally as impressive. Between the framerails sits a 528ci Indy Cylinder Head crate Hemi that spits out 730 hp and 660 lb-ft of torque. It's based on an Indy aluminum block bored to 4.500 inches, an Eagle 4.150-inch steel crank and rods, and Wiseco 10.25:1 pistons. Matched with a COMP 248/254-at-.050 mechanical roller cam, a Barry Grant 850-cfm carburetor, and Indy 440-cfm cylinder heads and intake manifold, the combo is both heroically nostalgic and potent. "It sounds absolutely wicked. The only appropriate motor for a Mopar is a big, naturally aspirated Hemi," Jeremy says. Moving farther rearward, the massive elephant mates to a Tremec TKO five-speed stick, which dispatches torque back to a Heidts independent rear suspension. The slick setup was originally designed by Heidts for street rods, then later adapted for muscle car applications. It's both simple and effective, and features a Ford 9-inch centersection mounted to the frame with a crossmember, 2-inch halfshafts, tubular lower control arms, aluminum spindles, QA1 coilovers, and inboard-mounted disc brakes.

Click on the link to read the full story! It's a sweet Challenger!
Scott Moseman
http://www.TheHEMI.com/
Follow us:

The owner talks about driving it to the track, hammering on it, then driving it back home. My question is where does the license plate go?