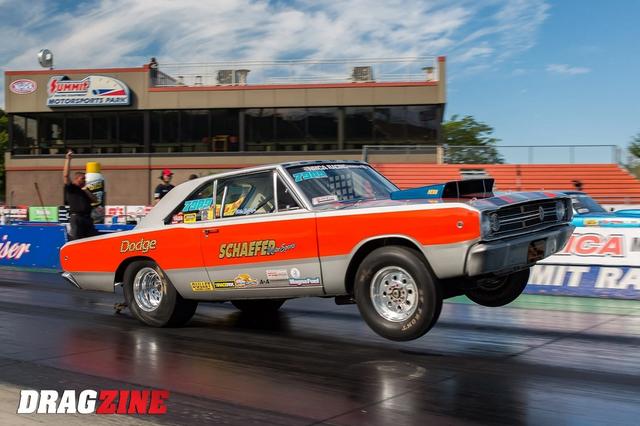 
Having plenty of variety in life is what really makes some individuals happy — they strive to find and try new things nearly every day. Mike Schaefer isn’t one of those people, especially when it comes to the kind of car he enjoys….it’s Mopar or no car for him, 365 days a year. The Mopar brand has been the automotive focus for the entire Schaefer family for decades and that focus isn’t going to change anytime soon, if you ask Mike.

Mike’s exposure to classic Mopar muscle came from his father, Bob, who worked for Chrysler back in the 1960s and 70s. His dad always owned Mopar performance vehicles, so Mike really didn’t see the need to stray far from what his family had always known. To Mike, Chevy and Ford just never offered any cars that really grabbed his interest. So, it shouldn’t be any surprise that he’s running a stunning HEMI-powered 1968 Dart in the NMCA’s Nostalgia Super Stock class.

“What is it that I like about the Mopar brand? Well, the Mopars are the odd man out in racing. When I was growing up nobody was out there really pounding on them because the parts were just too expensive versus a Chevy or Ford. The colors of the cars, the body lines, and the themes they had for the vehicles got my attention, they just had personalities that I liked. You couldn’t go to a Chevy dealership and get a car that had pizzazz, but you could go to a Dodge dealer and get a car with so many different options,” Mike explains.

How does drag racing fit into all of this for Mike? Well, that can also be traced back to not only his father, but his mother, as well. Mike’s parents barnstormed across the state of Ohio racing as much as they could, but soon their growing family needed attention and it was time to take a break from the track.

And while you can take the racer away from the track, but you can’t remove the racing from their soul, and that was clearly passed on to Mike.

“I had a friend that was constantly hounding me when I was 16 to race him. We finally lined up one day and raced, I was hooked after that…and yes, I beat him. I started racing at the track and my dad found out that I was sneaking off so I could race my 1970 440 six pack Cuda at the drag strip. Eventually, he asked me if I was going to the track and I told him no, of course. The next weekend after he asked me he showed up to the track without saying anything and watched me race from the stands,” Mike says.

When Mike found out his dad was at the track he was expecting some form of punishment for lying, but the exact opposite happened much to his surprise. Mike’s dad was totally onboard with him racing and even had an idea: sell the ‘Cuda and buy something they could turn into a racecar. So, the Cuda was replaced with a 1970 Dodge Challenger and the pair got to work on the new-to-them Mopar. The car was totally torn down to a bare chassis and was prepared for drag racing duties with a new engine, full roll cage, and other parts.

Mike went on to race with his father for many years, however, Bob passed away in 2004, and that left him at a crossroads with his racing. At the time, Mike was racing in Competition Eliminator because that’s what his dad always wanted to do. Mike had spent nearly everything he had to purchase a car to race in the class along with a Pro Stock Hemi engine. After about a year of racing the car, Mike just couldn’t do it anymore because it wasn’t the same without his dad.

About this time Mike’s son decided to begin his own racing adventure in the world of motocross. Eventually, his son turned pro and was racing a lot, but he was also getting hurt, so Mike urged him to stop racing dirt bikes. Mike’s son agreed, but just like his father and grandfather, he wanted to race something, so he informed his dad he would need a car to exercise his competitive itch. That decision set a whole new series of events in motion that would eventually lead to Mike picking up his current 1968 Nostalgia Super Stock Dart.

“I did a Google search for a Hemi Dart because that was one of my dad’s favorite cars. I was just looking for something to race and this car came up on Craigslist in South Dakota. I talked to the owner a few times and decided to put a deposit down on it sight unseen. I sent my son out with a trailer and pocket full of cash to get it. My son looked at it and called to inform me it was all there but it needed work. That’s all I needed to hear so I told him to load the car up and bring it home,” Mike says.

After the Dart made it home, Mike began the process of making the car his own. Under the hood of the Mopar is a 572 cubic-inch HEMI built by Best Machine in Farmington Hills, Michigan. The engine’s rotating assembly features a Callies crankshaft, GRP connecting rods, and JE pistons. Lubrication is provided by a Milodon oil pump and Moroso oil pan. The top end of the engine uses a set of Indy Cylinder Heads that Best Machine built with Ferrea valves and Ray Barton Racing Engines rocker arms.

Air and fuel is sucked into the mighty HEMI by a pair of Holley 770 carburetors that have been worked over by Charlie Westcott. Ray Barton Racing Engines provided the magnesium cross-ram intake the Holley carburetors rest on. The ignition system uses all MSD parts that feature an MSD 7 ignition box, distributor, and spark plug wires. This potent package has motivated the Dart to a best time of 8.78 at 152 mph in the 1/4-mile.

Behind the HEMI Mike has kept everything Chrysler, with a Torqueflight 727 transmission that he built with his son, Scott, that uses parts from A&A Transmission. The Torqueflight is matched to a 5600 stall-speed torque converter from Coan Racing and flexplate from JW Performance Transmissions. Connecting the transmission to the DANA 60 rearend is a carbon-fiber driveshaft from QA1. The suspension of the Dart features front shocks from AFCO and the rear units are from QA1.

Keeping the Dart rolling down the track is a full set of WELD Draglite wheels at each corner of the car with rubber from Mickey Thompson. Bringing the car to a stop after each pass are Wilwood brakes. Mike is kept safe inside the Dart by a Chris Alston’s Chassisworks roll cage, RJS seatbelts, and Stroud fire system.

Mike put a lot of effort into building this car the way he wanted and he was meticulous with how he approached it. The goal was to build a Nostalgia Super Stock car that was full of modern touches to make it function at the highest level possible.

“The car is a product of countless hours of working on it. A lot of people will get a car and just put an engine in it without focusing on the little things. This car has been taken down to nothing and put back together with the best parts that I know work at the track. It’s a well-built car — on the surface, it looks like just a Super Stock car, but it’s a very well put together piece. Myself, my son and a few friends did all the work to the car,” Mike explains.

Nostalgia Super Stock is an interesting class, as it’s filled with a variety of racecars that highlight the golden era of Detroit muscle. The cars of the class are what attracted Mike to it and it’s the very reason he purchased the Dart from the start.

“I’ve bracket raced, ran in Top sportsman and Top Dragster, but Nostalgia Super Stock was a class I’d never gotten to run. I’ve always loved Super Stock cars and this car was my chance to finally try it. I enjoy the Nostalgia Super Stock class because it’s a close-knit family even with the different brands involved. It’s cool to see all of the Chevy, Ford, Mopar, and AMC cars racing in the same class. You don’t have the bickering like you would have in other classes, and we all just love to race,” Mike says.

The drag strip is an escape for Mike — it has always been a place he can go to and enjoy himself. While it was hard for him to get back to that happy place after the passing of his father, the Dart provides a new avenue for him to get some quality family time once again.

“We enjoy going racing together as a family — if you take it too seriously it becomes a job and I don’t want it to become a job again. We go to have a good time and it usually works out for us. Building this car how we did just makes it perfect for us to enjoy our time at the track,” Mike explains.

Mike Schaefer is the quintessential Mopar man: he lives for the brand and has no problem letting other people know about it. That strong brand loyalty is a gift from his father that he’s never forgotten and continues to share to this day with the world via his amazing 1968 Nostalgia Super Stock Dart.

I love those Super Stock cars from back in the day! What an awesome car to get to race.