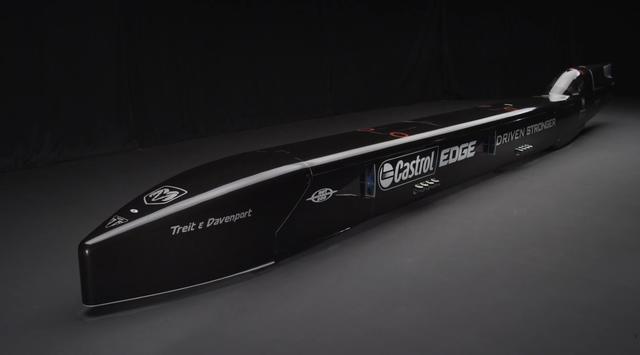 
Valerie Thompson is no stranger to speed.

Valerie Thompson is best known as the “World’s Fastest Female Motorcycle Racer.” She is an eight-time land speed record holder, with seven of those records over 200mph and one over 300mph.

She has piloted a streamliner-type motorcycle to a record of over 328mph. That’s not a typo: over three hundred miles per hour.

A streamliner is something like you saw in the movie “The World’s Fastest Indian,” a fully-enclosed two-wheeler that looks more like a rocket ship than a motorcycle. The machine she piloted is powered by a custom-built three-liter v-4 engine that puts out 500hp. She is no stranger to speed or to the dangers that come with it. She crashed the streamliner at 343mph in Australia last year, and walked away from that crash. She’s the only woman on the “World’s Top 10 Fastest Motorcycle Riders” list, and was named one of this year’s “Top 100 Leaders in Powersports.”

She is also starring in a feature film called "Rockets and Titans," which follows her journey to pilot a motorcycle that breaks the land speed record. It's from the same people who brought you "Dust To Glory," and "Step Into Liquid." It's definitely on my list.

Her next venture is on four wheels, but it is like no four-wheeler you’ve probably ever seen. It is a streamliner like her previous ride, but bigger, and much, much more powerful.

The “Target 550” streamliner has four wheels out of necessity; a two-wheeled machine would have trouble handling the power that it puts out and the stress of the speeds it will deliver. The machine itself is 43 feet long, 36 inches wide and just shy of 43 inches tall. It is powered by two supercharged Dodge V8 Hemi engines that put out a combined 5,000hp (yes, five thousand horsepower). It is built for one purpose: to go very, very fast in a straight line.

Thompson will pilot that machine on August 10, 2019 with the ultimate goal of breaking the current record of 417.020 mph. The coordinator for the Target 550 project coordinator, Marlo Treit, said “Valerie’s many accomplishments on and off the track have made a real impression on me. She is a wonderful racing ambassador and a ferocious competitor. I’m confident she will push the Target 550 Streamliner to its limits to achieve our goals.”

If the weather and track conditions cooperate on the date the team has targeted for their attempt, and if she is successful, Thompson could make racing history in two different categories. She could become the first woman to pilot a machine over 400 mph, and also the first driver (male or female) to pilot a piston-powered engine vehicle over 500mph.

She said, “I never assume anything, but if conditions are right, we are going for all the records and titles on the table. I want to show every sponsor and all our fans how much we appreciate their support.”