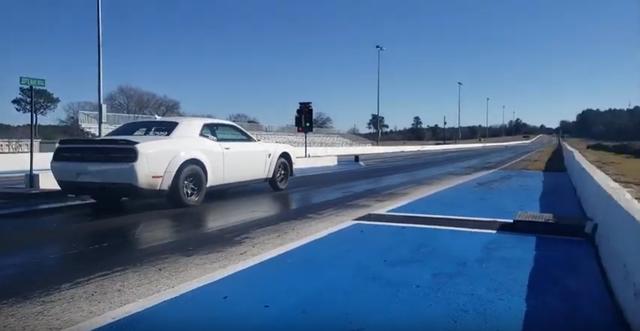 
Since the 2018 Dodge Challenger SRT Demon began reaching owners around the country, racers have been working to match the automaker’s official time of 9.65. Quite a few owners have beaten that number with modifications that added extra power, cut weight or both, but no one has run the Dodge number with stock power and stock weight, until yesterday.

Byron Godbee, the man who runs the Legion of Demons organization and racing series, piloted his Dodge Demon down the quarter mile in 9.57 seconds with stock power and stock weight. The only changes from factory form are the rear wheels and tires. Rather than running the lightweight wheels and Nitto drag radials, Godbee is running Billet Specialties wheels with Mickey Thompson drag radials. Literally every other aspect of this white Demon, car #3299, is original.

Godbee also backed up that 9.57 with a 9.58, making him the first private 2018 Demon owner to match or beat the official Dodge record with drag radials, stock power and no weight reduction efforts. The rear wheels may be lighter, but nothing has been removed from this factory one-seat car to beat the Dodge number. Many people said that it could not been done, but Godbee has proven them wrong. We knew that it would take perfect conditions similar to those in which Dodge recorded the number, and with those conditions coupled with a couple great launches, Demon #3299 is the first to beat Dodge number without adding power or removing weight.

After Godbee informed me of his incredible runs, he provided us with the story of how he became the first private Demon owner to beat the Dodge number.

In constant effort to break the record set in 2016, I once again loaded the trailer and headed to a dragstrip. This weekend (Dec 14/15) it was Bradenton, Florida. Again… chasing great DA. With an invite from fellow Legion of Demons member, Marc Heidings (who set a few records himself) 9.71 in +300 DA is the best #3299 could muster for the weekend.
On the way home from Florida, my son and I started looking at weather and tracks. Nothing was looking as if it was going to work out over the next week or so.

But on the morning of the 19th of December, we were scanning tracks and realized that Carolina was going to be in an incredible positive anomaly with weather.

So after calling the track manager, Jerry Hall, we were added to the private rental that was already planned for the day. We packed up and set off for the House of Hook.

Unloaded to a -1400 DA and 1st pass was a 9.81 cold… my car then threw a code. Without a code reader, I was relegated to 808 mode. Frustrated and thinking I was missing out on the chance of a lifetime… I was just going to make 808 tune passes and work on my launch techniques. The second pass was 808 mode and ran a 9.76. I then realized I had to clear the codes because we really had a shot at the record. After calling several people I determined that unhooking the battery would clear the transmission adaptives and basically sideline the car. So I drove 30 minutes away to a parts store and purchased a code reader to clear codes.

Back at the track the DA was creeping away. After clearing codes and checking pressures, I rolled up to the line excited and feeling like sending it. I set the launch control to 1700 and took the green light…. even the house of Hook couldn’t hold the Demon at that RPM on this 48° afternoon. So I backed up, realigned myself on the groove and just foot-braked it….. not thinking anything was going to come of it and boom it ran a 9.57.

While my son Cole and I were picking our jaws up off the ground, a Fox Body LS powered Mustang launched, sat on it’s rear bumper then slapped the track busting the oil pan and crashing into the left lane wall. I was crushed… I thought this run would never be backed up. However, Jerry Hall smiled and said “You do your job…let me do mine. Don’t worry.” They pulled out a Zamboni and went to work. They have everything at House of Hook to quickly bring the track back to race ready conditions with new tractors for drag, blower and rotators. Then they pulled out a brand new spray rig to spray, rotate and drag the 1/4 mile, knowing we had to validate with a second run.

I then pulled car back up to stage with only losing a few hundred points in DA with the delay and the car ran a perfect back up run of 9.58.

After backing up the record we attempted to do Nitto runs to break the 9.65 on Nittos to no avail. We did get 9.68 but it was a fluke run after I kept blowing tires off and called last run because I did not want to break the car.

I still cannot believe it, after 2 years we finally got the holy grail of weather days with a track capable of handling these 4300lb beasts.

So there you have it, Byron Godbee is the first private owner of a 2018 Dodge Challenger SRT Demon to beat the automaker’s record of 9.65. Critics will complain that he did it on a non-factory tire, but these numbers were run with the same class of street legal, drag radial tires as those which come on the car.

Also, in 100% stock-to-the-tires form, he ran a 9.68. No other production road car in the world can run 9.50s or 9.60s with drag radials, and while many critics claimed that no privately owned Demon could do it, Godbee has proven them all wrong.

Godbee and his 9.57 car will be returning, along with the fastest Demons on the planet, to Houston Raceway Park on January 17-19, 2020 for the next Legion of Demons event.

Return of the Demons 2020 will be three full days of racing and instruction provided by Legion of Demons members. Stock and Modified with transbrake, launch control, line lock, classroom and hands on training. Featuring on track challenges, heads up, bracket, index, grudge racing and our trademarked Legion of Demons “6 pack Demon Cycle”.

If you have a 2018 Demon, come out and learn from the best to achieve your personal best!

If you would like to learn more about Legion of Demons and register for Return of the Demons 2020 Private Event, go to LEGIONofDEMONSRACING.COM.

The 2018 Dodge Demon will go down in infamy. I hope they make another one someday!