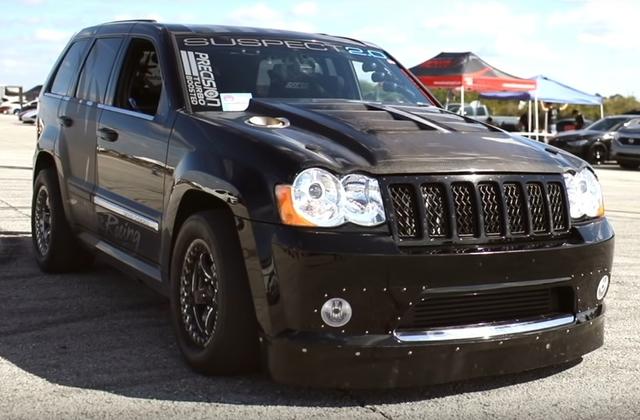 
This is the world’s fasted Jeep Grand Cherokee SRT8.

We’re pretty sure that when Jeep announced the SRT8 performance version of the Grand Cherokee SUV they never intended for it to have 2,000 crank hp. In fact, we’re pretty sure it was just meant to have 470 hp from a HEMI V8 engine, but you can’t account for racing teams looking to create big SUVs that are faster than hypercars.

This particular build comes courtesy of VanDrake Racing and Demon Performance in South Carolina. As you can tell on the team’s website, quite a lot of work went into this build and going over each and every new upgrade would be a book unto itself. But we’ll go over some of the highlights just to give you a taste.

First, the engine is 420 cubic inch (6.9-L) Demon TKM 6-1-based HEMI V8. Most of whatever else you find under the hood is entirely custom, from the billet intake manifold to the headers. An upgraded fuel pump pushes E98 fuel while exhaust comes straight out the carbon fiber hood.

Most of the SUV is made of carbon fiber, from all four doors to the custom carbon fiber body and roll cage.

You might have noticed the enormous 94mm turbocharger, which is a Precision Turbo Gen 2 XPR PRO. Boost is rated at 25 psi, but it can go higher.

The build started with an 88mm fan, but the goal of this build was to create an SUV that could break the 200 mph barrier. And for a car that’s basically an enormous brick on wheels, that’s a hard barrier to break.

At this year’s Wannagofast, the SRT8 managed to get up to 197 mph while sounding like a landing jet aircraft. Hopefully, they’ll find those few missing mph next year to make that 200 mph goal.