Discussion of the prototype Hemis. 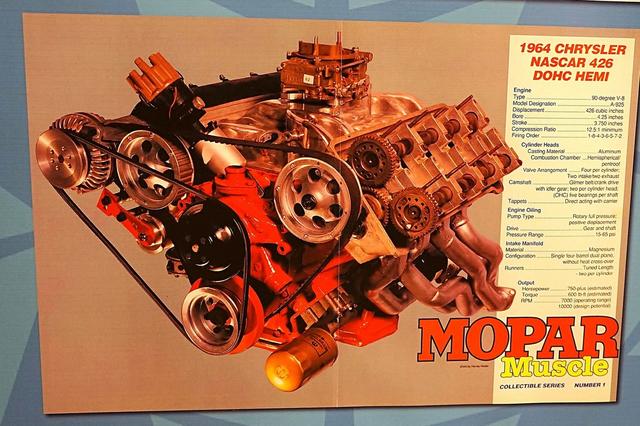 Return of the DOHC 426 HEMI
https://www.hotrod.com/articles/return-dohc-426-hemi/


Unburied after nearly two decades, the legendary DOHC 426 Hemi is shown at Indy.

I had heard stories about this engine and seen it pop up in magazines and books through the years. It was almost always the same pictures. This years at the Indy Mopar Trade Show, that all changed. The engine dual overhead cam Hemi was unburied and brought out for the first time in nearly two decades!

In 1964, the horsepower wars were in full swing. Chrysler Corporation had thrown down the gauntlet most recently with a 1-2-3 sweep at the Daytona 500. Not to be outdone, Ford built their “90 Day Wonder” the now famous 427 SOHC engine. Chrysler got wind of what they were doing, and basically the line of thinking was, why not have two camshafts in the head. It would get rid of a lot of expensive pieces. So, they went into development of the A-925 Hemi prototype aka DOHC Hemi.

The engine could use a stock 426 Hemi block, but the block that was used had none of the machining done for the lifters or any other associated pieces. The heads, now having two camshafts on top of each row of valves allowed for a four valve per cylinder arrangement known as a Penta-Roof Head, a more efficient Hemi head.

To use that new penta-roof cylinder head arrangement, you now had 16 intake and 16 exhaust valves to work with, so the intake was built to NASCAR specs for a single carburetor and 16 intake runners. Weirdly though, the intake on the prototypes were done in magnesium, not aluminum like normal. The same was true with the valve covers: they are also magnesium.

With the reduction in moving mass, the engine in theory could have been a pretty high revving engine, some saying upwards of 7,000 rpm and well over 500 horsepower. When the engineers hooked up a transmission to the engine, using it as a rpm multiplier with an electric motor, they ran the engine at high rpms for a short time, before they broke the tappet bosses on the engine, and the engine never went beyond that point in the development process because the program was cancelled.

About the same time, NASCAR had outlawed the “exotic” race engines in the series. No SOHC engines were going to be allowed to run, so the DOHC was no longer needed, effectively killing the program for good. Two engines are known to have been produced, and single head popped up on eBay a few years ago. The only known complete example was the one sitting now in front of me at the Indy Mopar Trade Show.

Surrounded by throngs of people was the engine that had haunted my dreams. The original 1964 DOHC 426 Hemi. It had a few parts missing, but not because they were lost, but because the owner, John Mahoney couldn’t dig them out of his storage basement in time. At Chrysler at Carlisle in 2018, John, his friend Mike Ford and Herb McCandless were talking, and Herb urged John to dig the engine out because people would really appreciate seeing it. With some help from his friend Mike, he started digging the pieces out of his garage and getting it ready for it’s unveiling at the show.

John had purchased the engine in 1983 after hearing from a friend at the 1982 Detroit Autorama that the engine was there. How the engine disappeared from the Chrysler engineering building and ended up at the Autorama years later is a bit of a mystery, but John was able to get the owners name and talk with him.

John flew to Madison Wisconsin from Kansas City to borrow his brother’s truck to pick up the engine from a man by the name of Herb Wilson. Herb was a local Detroit area teacher and Mopar circle track racer, and he had just bought a body-in-white 1983 Chrysler Imperial to race, so he sold the engine to John.

The engine went home to Kansas City, but it did make it around to a variety of cars shows and appeared in a few magazines. Then poof! It vanished. John had squirreled it away in his shop. Now that he had the engine, John wanted to learn as much about it as possible. He began digging into the history the best he could, and uncovered a bunch of very interesting pieces of the puzzles, sometimes very randomly.

While checking out a magazine with a DOHC Chevrolet engine on the cover, he came across the name of Richard Moser, who was one of the engineers with Harvey Crane (of Crane Cams) on the DOHC Chevrolet engine in the article. Giving Moser a call, John told him about the Hemi. Mr. Moser then shared that he had a set of original “blueprints” for the A-925 heads, as he had been the one who originally designed the camshafts for the engine. Not seeing a need to keep old drawing around anymore, gave them to John.

Later, after talking with Bill Weertman, the head of the project at Chrysler, he was able to go to the headquarters and request copies of some of the original photos that were taken of the engine back in 1964. The photo department offered to make prints in any size up to poster sized. After a few phone calls, John had poster sized and other sized copies of the DOHC Hemi at Chrysler.

Not much changed from there, it appeared in a few magazines and specials editions such as Car Craft, Feb 1972, Car Craft, Jan 1984, Mopar Muscle Special, Winter 1989, Muscle Car Review, June 1989 and most recently on the cover of the Mopar Muscle, August 2014 for the 50th Anniversary of the Hemi engine. Since the show in Indy, John working on locating the missing parts, such as the original intake, headers, lower crank pully/cam belt cog, and plans are to have it on display at Chrysler at Carlisle 2019 and the Muscle Car and Corvette Nationals 2019, along with a 1st Gen 331 Hemi with an odd DOHC Conversion, but that’s for another article.

It would have been very cool if this engine made it into production.
At the same time, I'm glad we didn't end up with DOHC HEMI motors.