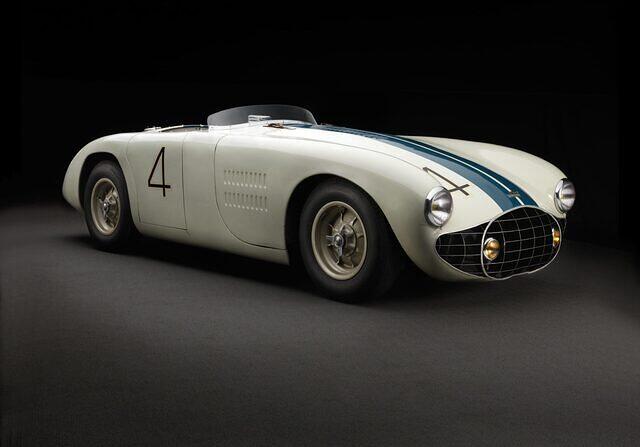 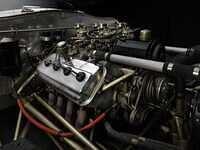 Together with factory teams of Alfa Romeo and Ferrari, Cunningham was a pre-race favorite to win Le Mans in 1953. Mercedes had elected not to return; little was expected of Jaguar because of its dismal performance the year before.

Joining the veteran Cunningham C-4RK and a C-4R held over from the 1952 event was the new C- 5R, which to the French seemed a giant step in the wrong direction. Solid front axles were regarded as practically antediluvian in Europe, even though Frank Kurtis’ Indianapolis cars were demonstrating how sophisticated that set-up could be made. In the C-5R the beam axles saved 30 pounds compared with the previous Ford components, and further were hoped to improve braking. The brakes themselves were huge 17-inch Alfin drums. Additionally, the Chrysler hemi was boosted ten horsepower over C-4 tune. The C- 5R’s body swooped from toothsome radiator grille – “The Smiling Shark,” journalists coined it – to sleekly finished tail.

Using Le Mans statistics for the past decade, Phil Walters and Briggs Cunningham carefully calculated the speed increase that logic and mathematics said would be required to win Le Mans in 1953. That extra speed had been built in, plus a little more for insurance.

The C-5R recorded the fastest kilometer at Le Mans in 1953 – 154.81 mph. Driven by John Fitch and Phil Walters, the car averaged 104.14 mph for the 24 hours, nearly 8 mph faster than the 300SL’s winning average in 1952. Alas, a Jaguar was 9 mph faster than the 1952 winner. What no one had counted on in 1953 was the British team’s new Dunlop disc brakes. The C-Types outbraked everybody in the field, finishing 1st, 2nd and 4th. The Cunningham C-5R, in 3rd, prevented a clean sweep. The first Ferrari to finish was 5th; Alfa had retired en masse.

Although 3rd was two spots further back than had been hoped, the Cunningham team effort was impressive. All three cars finished in the top ten: Briggs and Bill Spear in 7th in the C-4R; Charles Moran and John Gordon Bennett 10th in the C-4RK.

After Le Mans, Briggs dispatched Phil Walters to England to buy disc brakes for his team. Dunlop was receptive. Jaguar said no. Cunningham did not get the brakes.

Quite a change from the cars we see racing at Le Mans these days! Very cool vintage race car!