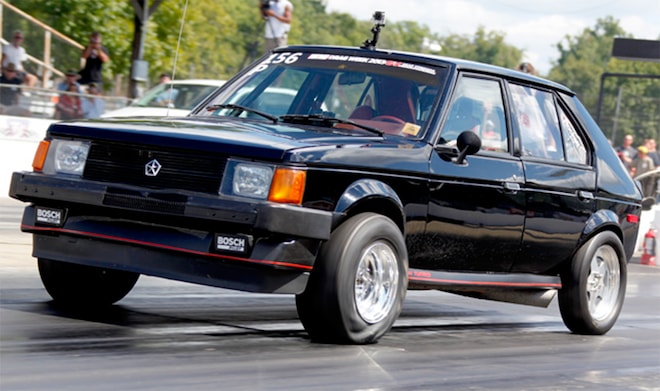 
If someone asked a group of drag racers to describe what comes to mind when thinking about the hash tag #turbomoparmafia you will get all types of answers. Most wouldn’t include a Dodge Omni however James Reeves isn’t like most. The engineer from Augusta Ky. Is a certified car nut, and over the last 20+ years has been racing and tinkering on all sorts of different machines.

When I asked James about the Omni he said “I had a 1970 Nova it was tubbed, had a powerful 350, cage, etc. But when I went to the track it seemed like there was 50 other Novas there. I wanted something different.”

In 1998 James picked up the Omni GLH (Goes Like Hell, as Dodge named it!) and the little car has seen a few different setups over the years. Almost all of the work has been done by James and his friends. When he got the car it ran 15s since then it has run a best of 9.99@143mph.

James has attempted and completed Drag Week 3 times however each year has presented a variety of issues and haven’t always been easy. In 2013 the car was on survival mode trying to finish and learn about the event, running on wastegate pressure only the little Omni was running low 11 second ETs when the alternator decided it had enough. After phoning every parts store for miles they found a larger alternator that just barely fit in the car. He qualified for the top 32 in the Street Machine Eliminator class.

James returned to Drag Week in 2015 and started turning the car up as the week went on and running mid 10s. The car actually ran was running great, that isn’t to say his little trailer was going to let them finish the week without issues. The well used trailer broke apart and flipped on the interstate, this sent all of his tools, wheels, tires and supplies across the highway. The Omni took a small dent in the back and the #turbomoparmafia quickly helped to clean up the mess off interstate.

2015 had the heads up shoot out on Saturday. James managed to run the car all out and made his personal best pass of 9.99@143mph. He managed to make a pressure regulator from his air tank work with his boost controller and got 38 psi of boost on that pass.

For 2016 things weren’t so nice for James from day 1 he had problems. After swapping to an MLS headgasket before Drag Week the car was pushing water and missing. After limping through to Michigan James met up with a friend and used his air conditioned shop to swap the headgasket on the car.
At US131 the car was still missing and had developed an issue going into third gear. After arriving in Indy and used another friends garage to rebuild the transmission. After replacing some pieces and getting the car back together they were able to get to the hotel at 5 am. When they got up at 7 and headed to the track the car was still missing. James finished off the week way off of his usual ET numbers, and drank a lot of beer while cheering on the #turbomoparmafia.

As it would turnout the o2 sensor had fouled and was flooding the car, once they changed that the car was back. He just didn’t find out until long after Drag Week.

For 2017 James plans to return once again. He may not be bringing the Omni though the transmission issues still plague him and as James says “I have a 96 Viper GTS just begging for some drag radials and nitrous.”

Throughout all of this James couldn’t have done it without the support of his very understanding wife Katie Jo, his mom and dad, Tim Floyd of Creative Fabrication, Steve Menegon. Mike Oaks, Aaron Miller and the NTH Moto Team, Warren Hall, SDAC.org and Drag Week Team 707. This group of people have been there to get the car sorted, supported James and allowed him to enjoy himself even when its 5 am and the car is in pieces.