Discussion of the 426 Street / Strip HEMIs. 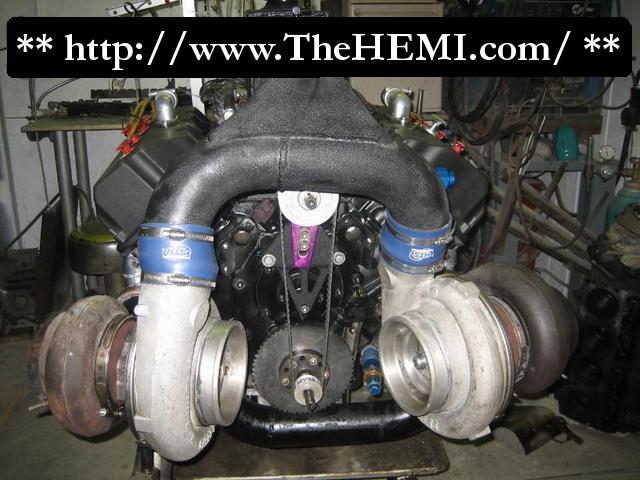 
The moniker “Monster Mopar” that has been given to a series of Chrysler events is also a rather fitting name for this bullet recently completed by Fred “Hemi Fred” Ristagno from Sewell, New Jersey, who is also affectionately referred to as the “the Mayor of HEMItown.”

This beast is a twin turbocharged , 450 cubic inch HEMI that Ristagno states produces a wicked 2,047 horsepower and 1,795 ft-pounds of torque at just a relatively low 30 pounds of boost. With the wick turned up and the boost levels cranked up a few notches to around 40-45 pounds from the 92mm Pro Mod Precision turbos, this big elephant should put out in the neighborhood of 3,000 horsepower. Upon first glancing at the photos, with the style of intake it has on top and the turbochargers mounted side by side to the engine, it looks a lot like the big V12 aircraft engines that were used on unlimited hydroplanes back in the 70’s and 80’s…minus four cylinders of course.

Horsepower costs money, and this kind of horsepower is generally a hefty sum of it. But through acquiring used parts via eBay and other sources, Ristagno says the complete engine, ready to run cost him well under $15,000.

The powerplant, which actually has a pretty fierce and intimidating look to it with the flat black paint applied to nearly everything but the headers, is made up of a .550 short deck Keith Black block with a 4.40” bore that was chosen based on cost, a 3.625” stroke Crower crank purchased online for $200, 6.86 rods, and 13:1 high dome pistons that were purchased for $25 apiece despite his desire to have flat top pistons.