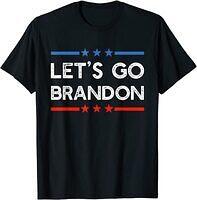 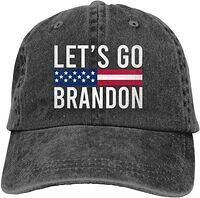 ‘Let’s go, Brandon!’ – the backstory of this Joe Biden meme that’s all over the Internet
https://bgr.com/politics/lets-go-brando ... -internet/


Spend enough time scrolling through Twitter, and you’ll eventually come across it. A simple, three-word exhortation — “Let’s go, Brandon!” — that’s spread like wildfire across social media, this phrase has quickly become a combination anti-Joe Biden meme as well as a conservative rallying cry of sorts. You’ll generally find the phrase shared in posts written by critics of President Biden, but it’s gone on to become a hashtag, a meme, it’s included in account names and handles — and it even now adorns merchandise. A “Let’s go, Brandon” song went viral on TikTok in recent days, garnering tens of thousands of likes. And at the recent Georgia-Auburn game, someone actually rented a plane to fly a banner with “Let’s go, Brandon!” written on it.

If you haven’t come across this phrase yet for whatever reason, however, we’ll break down the backstory below. Basically, this catchphrase, hashtag, whatever you want to call it — it’s 2021’s version of that viral clip from last year of a CNN reporter insisting to viewers that protests taking place in the frame behind him were peaceful (even though a building was clearly on fire).

This whole thing got started earlier this month, at the Talladega Superspeedway. Brandon Brown had just won a NASCAR race. And sportscaster Kelli Stavast at one point commented during an interview with Brown afterward how the crowd seemed to be chanting in his honor: ‘Let’s go, Brandon!”

Unfortunately, that’s not actually what they were chanting. Not even close.

The crowd was very clearly addressing President Biden, not Brandon. Only, with an f-bomb in front of his name instead of “Let’s go!”

Needless to say, this phrase’s virality was assured pretty much from the get-go. And Biden supporters, if they’re honest with themselves, know good and well that they would have reacted the same way had this been, say, a Fox News host interviewing someone and pretending that a crowd chanting “F— President Trump” was actually encouraging someone named Brandon.

One common usage of this catchphrase since then has been to attach it to news that makes the president look bad. For example — The economy is in the dumps, you say? Well, let’s go, Brandon!

The phrase was all over social media again this weekend, with the news that Southwest Airlines was canceling tons of flights (leading to suspicion that Biden’s vaccine mandate was somehow to blame).

Another use of this phrase: “Let’s go, Brandon!” is also now being used as a replacement for the more vulgar invective directed at President Biden. It’s a code phrase, it’s a meme, it’s an example to conservatives of media bias — it’s a neat and tidy summation of so many different crosscurrents in the news right now, actually.

One thing it’s not? It’s most definitely not going away anytime soon.

I had to document this before the story faded away. #LetsGoBrandon!
Scott Moseman
http://www.TheHEMI.com/
http://www.MyAutoMaintenance.com/