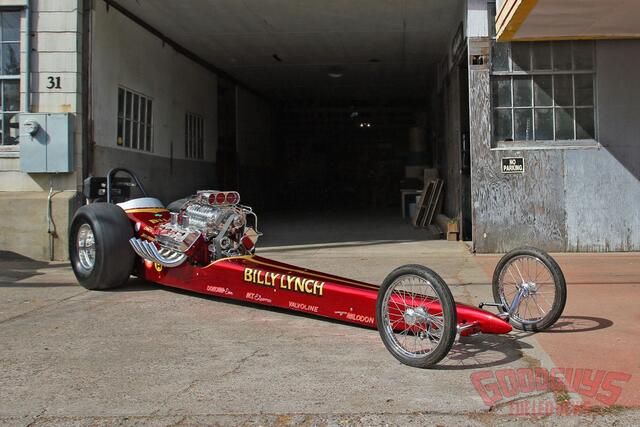 
In the late-’90s and early-2000s, a growing number of drag racers, fans, and car builders began to take it upon themselves to restore or recreate historic race cars and fire them up at events across the country. The majority of what you’ll see at these “cacklefest” and at shows like the Goodguys Nitro Thunderfests are vintage front-engine “slingshot” dragsters from the 1960s, but restored Funny Cars, early rear-engine dragsters, Fuel Altereds, and A/FX cars have seen a growing resurgence in recent years, too.

There’s definitely something special about these cars. Not only is this racing era a time warp of candy paint, gold leaf lettering, and individuality, but it’s also a step back to the basic of mechanics. Fuel, air, and spark is all that’s needed to lite the fire. No computers, no automated devices, just man and machine – just as it was “back in the day.”

As beautiful as these cars are, they’re more than just an artform. They aren’t built to only be admired; they are built to impress and perform. And what’s more impressive than a supercharged Hemi popping on 90-plus-percent nitromethane? This substance alone excites four of your senses – sound, smell, taste, and feel. These cars literally shake the ground beneath your feet. The fumes spewing from the zoomie headers will make your eyes uncontrollably water…but the smell and taste won’t let you walk away as you crave more.

The car we’re talking about today is the Billy Lynch Race Car Specialties AA/Fuel Dragster that he ran in 1967. Lynch was a major East Coast player in both Top Gas as well as Top Fuel throughout the 1960s. He would regularly swap his Top Gas engine out and put Mike Sforza’s Top Fuel engine in to compete in AA/Fuel events. It was in 1967 that he hit the professional circuit and racked up many accolades, including the NASCAR Spring Nationals win in Maryland, AHRA Nationals win at New York Speedway, NHRA Northeast Division 1 points championship, the AHRA ET record holder in Top Gas, and more. Lynch left the sport in 1970 to pursue family and business ventures for 20 years before coming back to run Top Fuel for a few more years beginning in 1990. He officially retired from competition in 1995.

Lynch was certain that he wouldn’t be able to track down his original car, so he contracted legendary racer and chassis builder Pat Foster in early 2006 to recreate the car he enjoyed the most, his 1967 Race Car Specialties dragster. No one knew at that time that it would be the last chassis Pat Foster would build.

As with any Pat Foster build, the frame was built around the engine mid-plate using chromoly tubing. Every tube was bent, notched and fitted to perfection before being TIG welded. The 17-inch spoked front wheels are attached to a quad-link drop axle with Anglia spindles. Original magnesium Halibrand big window rear wheels are wrapped with 16×12 M&H Racemaster slicks and are backed with Hurst Airheart dual-caliper brakes. Foster hand-formed the aluminum body before Bob Gerdes of Circus Custom Paint applied his last paint job. Gerdes used House of Kolor candy apply red over a silver base. The lettering and 23k gold leaf were handled by Julian “Mr. J” Braet and Mike “Mikey Boy” Frederick in one day!

While Pat was constructing the chassis, Billy Lynch was hard at work building the engine. He used a ’58 Imperial 392ci Hemi topped with one-of-eight Art Chrisman / Dick Holt-built billet 6-71 superchargers and an Enderle injector. Jon Mondello built the cylinder heads with Donovan intake valves and rockers, Inconel exhaust valves, Engle springs, and Smith Bros pushrods. Original magnesium Donovan 5-rib valve covers were polished to perfection to cover the heads. A Tom Cirello-built Schiefer Magneto ignites the spark while a polished Crager blower drive builds boost. A Schiefer clutch and flywheel is tucked inside a chromed Donovan bellhousing delivering an estimated 4,000 horsepower to the chromed floater rearend and 3.42 gears. Pete Jensen is the current crew chief, with help from Mark Leigh, and they have the Hemi barking on 90 percent nitro when it fires up.

The cockpit features the bare minimum needed to control the car and includes a polished T&S steering box topped with a butterfly steering wheel, custom handles and pedals built by Pat, and a diamond-stitched leather seat cover.

Drag racing historian and current caretaker of the Billy Lynch dragster, John Lipori, now has three vintage race cars in his garage to show off, fire up, and share their history. Billy and John are family friends, so when the dragster went up for sale John didn’t hesitate to purchase it to ensure it is kept in pristine condition, both visually and mechanically. The 1967 Race Car Specialties Dragster is in good company now in Southern California alongside the Ingénue Buick-powered Funny Car, as well as John’s father’s original Top Gas dragster. Cars like these are sure to keep memories of drag racing’s golden era alive for years to come.