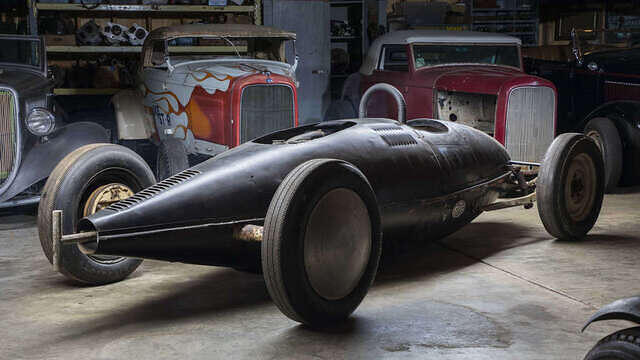 
A record-setting belly tank race car from the '50s and early '60s is now carefully stored in a New England barn. Almost 60 years since its last race, this historic hot rod survivor awaits a return to its early racing condition, complete with the supercharged, injected Hemi engine that carried the tank to speeds of 200 mph and faster on the Bonneville salt flats.

The belly tank racer is one of the numerous significant cars owned by Dave Simard. Dave has been professionally building and restoring early-style traditional rods at his shop, East Coast Custom in Leominster, Massachusetts, for almost 40 years—in addition to curating his amazing personal collection. Among the rows of time-honored prewar Ford street rods, race cars, and customs in his barn, this belly tank stands alone.

In the '90s, Dave was searching for historical Bonneville race cars and had a lead on this belly tank. He found out that it was the record-setting car that Ted Frye had raced on the Southern California dry lakes and on Utah's famous salt flats.

The term "hot rod" wasn't in common use in the '30s when young gearheads started stripping down and hopping up Model Ts, Model As, and Deuces—roadsters mostly—to race on the dry lake beds in the Mojave Desert. The creation of the Southern California Timing Association (SCTA) in 1937 brought together the area's many car clubs and speed shops and organized racing events on the lakes. It was a huge step toward promoting and publicizing the hobby in its earliest days.

The history of hot rodding seemed uncertain after the U.S. entered World War II. At home, gasoline shortages and the automotive industry's conversion to defense efforts put the brakes on a lot of automotive activities, and many of the young men who had been participating in those activities were gone—shipped overseas to fight. When those young men came home, it was often to well-paying jobs using mechanical skills picked up while in the service. They were returning to hot rodding, or discovering it. And they were figuring out how to use surplus and leftover military mechanical supplies to build hot rods.

Among the military items that hot rodders adopted were aircraft fuel tanks. Combat planes like the Lockheed P-38 Lightning were designed with detachable external tanks, called drop tanks or belly tanks, which extended the plane's fuel range and would be dropped from the plane when they were empty in order to cut down on weight. After the war, racers discovered that these lightweight and streamlined aluminum tanks were just the right size to hold an engine in the rear and a single occupant up front.

Ted Frye of Los Angeles built this P-38 tank in the mid '50s. He was working for Isky Racing Cams in those days and, naturally, Ed Iskenderian (one of the founding fathers of hot rodding and still active today at the age of 100), was involved. In addition to sponsorship and mechanical contributions from Isky, Ted's tank was sponsored by Lee's Auto Parts, as evidenced by the faded lettering on the side of the shell. Lee Titus' Santa Monica, Californiabased speed shop sponsored a few dragsters, as well. Incidentally, that worn lettering shares space with some elaborate pinstriping that was added by famous and eccentric 'striper Von Dutch.

"Ted informed me that he had purchased the tank in 1954," Dave told us. "At first, it was Flathead powered. He ran it for one year with the Ford engine before installing the supercharged, injected Chrysler Hemi."

The Hemi is a 1956 354, destroked to 300 cubic inches. "It's a small Hemi with the big Hemi heads," Iskenderian told us. "It used to go real good at Bonneville and set some records. It had low compression and a supercharger. Ted ordered the pistons down the hole a ways for a short stroke. You get a bigger compression chamber with a bigger combustible charge that way and he wanted to fill it with supercharged air. On the dyno, it wasn't very powerful until we put the blower on it. Then it got real strong. I remember that when I arrived at Bonneville, Ted had already been there a few days. When I found out that he had fast times, I called him away from the crowd and told him, 'Everyone else is having trouble, but your engine is so good. Your spark plugs and everything just look great. Now tell me in confidence, what are you doing?' He said, 'Water injection.' By golly, he had rigged up a water tank, and when the blower put more air pressure on top of the water in that tank, it squirted some in according to how much blower pressure he had. The water keeps the temperatures down a little bit, as if it had higher-octane gas. It worked out perfect. Even [Stu] Hilborn commented on it."

The tank was disassembled in 1965. According to Iskenderian, the Hemi engine was raced in a dragster that Ted was involved in with Ed Pink. "I guess it never did blow up," he said. The engineless tank sat in Ted Frye's backyard for 30 years. Then Dave Simard showed up. "Ted agreed to sell the tank to me, less the Chrysler Hemi engine," Dave said. "I brought it from L.A. back to my shop in Massachusetts."

When Ted Frye passed away, Iskenderian purchased the Hemi engine from his widow. "I knew that Isky had the engine at his shop," Dave told us. " I went to California a few times to meet with Ed. I explained that I had purchased the tank from Ted and would like to reunite it with the original Hemi. Ed finally agreed, saying, 'It's probably in better hands with you than it is with me.' The supercharger wasn't with the engine. Ed had loaned it to a friend 10 or 15 years earlier. After a quick phone call, the supercharger was back at his shop at 8 the next morning. I got the engine complete with the Isky-drive supercharger, Hilborn injection, Vertex mag, Isky's special grind 'five-cycle' cam, and even the original headers. Ed, who was 92 at the time, even got in a forklift and loaded the engine into the back of my truck. The engine is fresh and ready to run. Ed told me I could take it home and start racing."

At East Coast Custom, Salty Shaker is temporarily packed with a Flathead with four two-barrels until Dave can reunite the belly tank with the supercharged Hemi. We don't expect to see any more 200 mph runs at Bonneville, but the fact that a historic land speed racer is in the process of being restored is pretty thrilling.

I have never heard of belly tank racers before seeing this article. These are awesome!