Installing a ProCharger Supercharger on a 6.4L HEMI

Installing a ProCharger Supercharger on a 6.4L HEMI 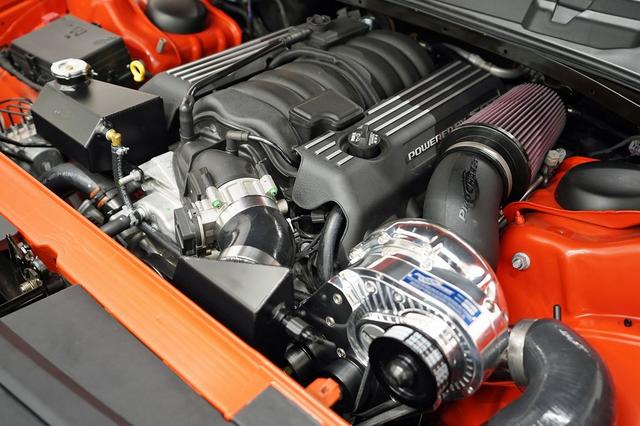 
After a short period of ownership of your new Challenger, Charger, Ram, or an SRT version of the Durango, Grand Cherokee, or Wrangler, a decision was made that the horsepower the 5.7L or 6.4L Hemi was putting to the ground was no longer enough to satisfy the never-ending quest for more power. To increase the output of the Hemi, all options were considered, such as upgrading the heads and camshaft, adding nitrous, installing a turbocharger, or even mounting a supercharger. After carefully studying the benefits and drawbacks of each power adder, it was determined a centrifugal supercharger would provide greater performance than a head/cam swap, be available all the time unlike the constant bottle filling required for nitrous, would fit into the engine bay and look like a factory installation rather than an aftermarket add-on like a turbocharger, and the centrifugal supercharger would provide more effective output than a turbocharger when run on pump gasoline. A call was placed to ATI ProCharger for one of their High Output (HO) Intercooled System, which included an air-to-air intercooler. This supercharger kit was designed to work with stock compression pistons (which our 2018 Challenger has) and a fuel octane rating of 91 or higher.

Why did we select ProCharger? ProCharger was the only choice when it came to a 100 percent complete, bolt-on supercharger installation. They have been the leading aftermarket supercharger manufacturer for 25 years, and their products are some of the best engineered, reliable, and powerful on the market. The ProCharger line is USA engineered and built to provide excellent power/pound of boost for a multitude of applications, including not only late-model V-8s, but trucks, SUVs, compacts, motorcycles, and various marine applications. The ProCharger supercharger comes with an air-to-air intercooler that helps keep the charge air temperatures at a minimum for maximum power. Lastly, there’s a warranty with each supercharger system.

Before the installation of the ProCharger began, our stock 2018 Challenger with a 6.4L Hemi was strapped to a Mustang dyno to evaluate the rear-wheel horsepower and torque. With the engine and drivetrain up to operating temperature, a run from 3,100 to 6,200 rpm was performed. The numbers were impressive for a stock, off-the-showroom floor vehicle. We made several more baseline runs, and all the runs were very similar in performance output and consistency; the best run resulted in a peak of 426 rear-wheel horsepower at 6,200 rpm, and the torque peaked at 404 lb-ft at 4,300 rpm. Pleased with the results, we moved the Challenger to a four-post drive on vehicle lift, so the stock component removal could begin.

Prior to starting the removal process, we familiarized ourselves with the kit. With dozens of parts in the kit and a thick installation guide, it looked like a daunting undertaking, but with good planning and patience, the installation progressed smoothly. Following the steps of the installation guide, we ensured that no fuel pressure was in the fuel rails before they were removed by pulling the 20-amp fuse No. 6 or relay 46 (depending upon model year — both located in the trunk) to disable the voltage to the fuel pump, and the engine was turned over for 15 seconds to bleed off the fuel pressure. After the pressure was relieved, the negative battery cable was disconnected. We removed the engine covers, unclipped the wiring harnesses from each fuel injector, and pulled the injectors and rails from the intake manifold. Each injector was removed from its fuel rail and new injectors supplied with the kit were installed. The new injectors with the fuel rails were reinstalled into the intake manifold.

The manifold absolute pressure sensor (MAP) was removed from the intake manifold. A MAP adapter was threaded into the intake manifold, and a new supplied MAP sensor was installed on the MAP adapter. A fresh set of plugs (16) that were one step colder were gapped to .035 inch and torqued into each cylinder (two plugs per cylinder). The intake air temperature sensor (IAT) was removed from the engine. The positive crankcase valve (PCV) hose was freed from the airbox assembly, and with the unthreading of a bolt and the band clamp on the airbox housing, the airbox was pulled from the engine bay. While in the engine bay area, the radiator cavity covers (black airflow dams) were detached from the radiator support. If the vehicle had been equipped with a shaker hood, several additional steps would’ve been required to remove the airbox from the car.

The Challenger was raised so we could gain access to the under-chassis body cladding. There were three lower front fenderwell panel fasteners that were removed per side. The back cladding required unthreading of four fasteners to free it from the chassis. Following the removal of the back cladding, the removal of 11 additional fasteners released the front cladding from the Challenger. With everything that attached to the exterior of the fascia removed from the top and bottom sides, we had to dive deeper into the fenderwells and into the area around the air conditioning condenser to remove more clips, rivets, and fasteners to remove the fascia. While we were removing the various fasteners, we disconnected the wiring harness to the fascia, thus eliminating the need to unplug each turn signal and fog lamp separately. When we were sure we had every fastener removed, we taped the front edge of the fenders of the Challenger with several layers of 2-inch masking tape to protect the paint. Each side of the fascia was unsnapped, and the fascia was gently pulled straight forward off the Challenger. With the fascia placed on a pair of fender covers on the floor, we proceeded to remove plastic radiator shrouding and ducting from around the condenser and radiator. The serpentine belt and tensioner were removed, and lastly the horns were disconnected from the harness and removed. The horn brackets were set aside and wouldn’t be reused for the supercharger installation.

The new coolant reservoir was installed on the opposite side of the Hemi from the stock location. One factory coolant fitting elbow was reversed (pointed toward the passenger side) in its factory hose, and the hoses were rerouted to the new location of the reservoir. The petcock in the radiator was returned to the closed position, and we filled the system and the reservoir to the full cold level designated on the new reservoir.

We were on the home stretch with our installation. Before the fascia went back on the Challenger, we had to attach the ambient air temp sensor to the intercooler bracket near the horns with zip ties, and two fascia deflectors had to be removed to allow the intercooler and the fascia to fit together properly. The fascia was carefully remounted, and the fasteners and clips were reinstalled. The electrical connection to the fascia was reattached, and both underside cladding panels were secured to the chassis. Lastly, the radiator cavity corners were snapped back into place.

We did a once-over of the installation to verify a component, fastener, trim panel, or anything else was not left loose or was out of place. Once we determined everything looked good, the negative cable was reattached to the battery, and the fuel pump fuse or relay was reinstalled (if it had not been previously). We started the 6.4L and listened for any abnormal noises or noticeable shaking from the engine. After a warm-up cycle, the engine was shut off, and after cooling, the fluid levels were all checked.

Regardless of which kit was purchased, the engine will require a new tune to be uploaded to the PCM before the engine can be run. We had a custom tune uploaded to the PCM (ProCharger will provide the custom tune on your PCM), and with that, we were ready for some additional dyno runs. With more than a quarter tank of 93-octane fuel in the tank, and a fuel pressure gauge connected to the fuel rail to verify the fuel pressure remained between 55 and 60 psi, we ran the Hemi from 3,100 to 6,400 rpm several times. Just like the baseline runs, the runs were consistent and repeatable, but unlike the baseline runs, the 7 psi of boost pushed the numbers up greatly. The engine torque increased to 502 lb-ft at 6,000 rpm, and the engine horsepower jumped to 601 hp at 6400 rpm. The engine horsepower was still increasing when the rev limiter was engaged at 6,400 rpm. The torque increased 98 lb-ft over stock, and even better, the torque with the ProCharger supercharger was higher at all points of the run than the peak torque of the baseline. The horsepower increase was an incredible 175 hp on pump gas at the rear wheels.

If you’re looking for triple-digit increases in torque and horsepower for your late-model Hemi, it’s time to step up to a ProCharger supercharger. The performance numbers provided are excellent, while maintaining decent fuel mileage and civilized street manners on 91 or greater octane fuel. If your engine is already modified or the horsepower gain of the HO Intercooled System doesn’t meet your needs, ProCharger offers an intercooled Stage II supercharger system that’ll elevate the performance numbers of your Hemi into rarefied air. For a boost in your Hemi’s output, give the reps a call about which ProCharger supercharger system will best fit your needs.