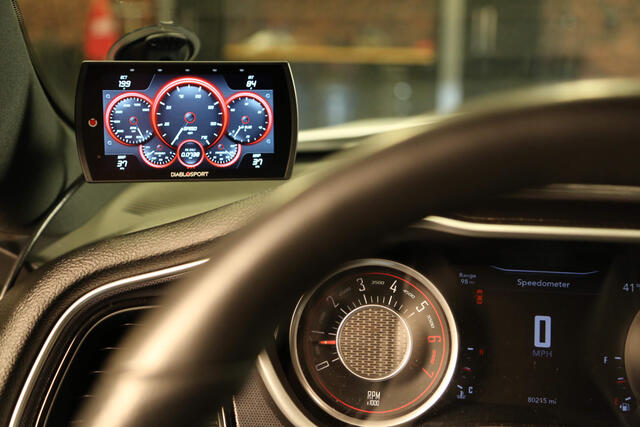 How To Unlock The Potential Of Your Gen III Hemi
https://www.holley.com/blog/post/how_to ... _iii_hemi/


Regardless of one’s brand allegiances, it’s hard to deny the fact that FCA’s domestic marques – Dodge, Chrysler, Jeep, and Ram – have played a significant role in the performance renaissance that enthusiasts have enjoyed over the past decade or so. Originally debuting under the hoods of Dodge’s full-sized pickups back in 2003, the third generation Hemi has gone on to provide motivation for everything from the 707hp Jeep Grand Cherokee Trackhawk to the 840 horsepower Dodge Challenger SRT Demon, the latter earning the title of the most powerful mass-produced muscle car in history.

Cars like the Demon and other Hemi-powered brutes in the Dodge stable helped the brand reach the milestone of putting half a billion horsepower on America’s unsuspecting streets last year, and with models like the new Charger Widebody and Challenger 50th Anniversary Edition making their way into showrooms now, it doesn’t appear like they are planning to slow down any time soon.

But as these muscle machines get into the hands of more and more gearheads, it’s just a matter of time before many of these modern Mopar owners are ready for performance that goes above and beyond what’s available from the factory.

That’s where the horsepower gurus at DiabloSport come in. Since 2002, the Ogden, Utah-based outfit has been helping enthusiasts and racers expand the capability of their late model hot rods by providing the tools needed to access the performance parameters in a given vehicle’s engine management systems. As with just about any modern automobile, FCA’s Hemi-powered models are controlled by an ECU that determines things like ignition timing, air/fuel mixtures, and many other real-time variables. And if you want to see meaningful gains from modifications like cold air intakes, exhaust systems, supercharger pulley swaps, and other performance upgrades, that ECU software must be updated to reflect those alterations.

But it’s important to note that the process of tuning these Mopars can be a little bit different than what you’re used to if you’ve wrenched other late model performance machines. Here we’ll dig a bit deeper into what that entails, and take a look at the options that DiabloSport has on offer for Hemi fanatics who’re ready to step up their game.

Making changes to a Gen III Hemi’s engine management software isn’t as easy as hooking up a laptop to the vehicle’s diagnostic port and going to town. As DiabloSport’s Dan Dolan explains, gaining access over the years has been more akin to a high tech game of cat-and-mouse between DiabloSport and FCA.

“The Chrysler ECUs have always been notoriously hard to crack,” he says. “And one of the reasons for our huge initial success in the Gen III Hemi market was because we were offering something that no one else had been able to do.”

By getting around that encryption, DiabloSport had opened up a vast array of modification possibilities for owners of the Dodge Charger, Challenger, Magnum, and the Chrysler 300C, along with Hemi-powered Jeeps and Ram pickups. But it wasn’t long before FCA came back with a response.

“In 2011 they basically decided they’d had enough of this, and they introduced a new controller to their vehicles,” he tells us. “That required a completely new reverse-engineering strategy from us, which we implemented, and we cracked that as well.”

But then in 2015, FCA took things to a new level. “They locked it down even further, to the point where you really can’t do anything from the OBD-II port. We have to physically have the ECU in our hands to unlock the use of the OBD-II port for the customer.”

That’s a notable change because, in contrast to older vehicles, the process of making ECU changes to a stock 2015-or-newer Hemi vehicle requires an extra step before you can hook up a tuning device to the car and apply new calibrations. Dolan notes that Mopar enthusiasts have a few different options when it comes to tuning these newer vehicles.

“You can take the PCM out of the car and send it to us to be unlocked, and then you can tune it with any of our off-the-shelf devices,” said Dolan.

DiabloSport also offers a swap option that minimizes the amount of time the car is out of commission. “With that option, when you order it we ask for your VIN and we send you a tuner, along with a new PCM that’s already been unlocked. Also included with that is a UPS shipping label so you can send your old one back to us, essentially as a ‘core.’” Would-be tuners have the option of keeping both the new unlocked PCM and their original PCM for an additional fee.

Regardless of where your particular Mopar lands in this encryption business, you’re going to need a hand held device when you’re ready to start making changes to the ECU tune, and DiabloSport provides several options here as well.

Enthusiasts have three main choices when it comes to DiabloSport hand-held tuning devices, and the one that makes the most sense for you largely comes down to what your particular application is.

If you’re looking for a budget-minded option with a focus on the core tuning features, the Predator 2 will deliver.

Outfitted with pre-installed performance tunes to add horsepower to your vehicle right off the bat, this hand-held also allows the user to change vehicle parameters like gearing, tire size, top speed and rev limits, checks and clears trouble codes, and data logs through the OBD-II port. And for those who’re looking to take their tuning capability a step further, the Predator 2 Platinum adds support for DiabloSport’s CMR (Chip Master Revolution) program, which allows tuners to create fully custom ECU tunes using the company’s industry-leading calibration software.

If you’re seeking something a bit more advanced, there’s the inTune i3. The inTune i3 packs all the functionality and features of the Predator 2 in a svelte device that boasts faster transfer speeds, a hassle-free “Easy Tune” installation wizard, and the ability to purchase multi-vehicle licenses (ability to tune multiple cars) for a single device. And like the Predator 2 Platinum, the inTune i3 Platinum adds support for DiabloSport’s CMR (Chip Master Revolution) custom tuning software.

At the top of the totem pole sits the Trinity 2 EX. While this slick-looking touchscreen device also packs the feature set found in the inTune i3, Dolan notes that it plays a different role in a hot rodder’s performance arsenal.

“With the inTune you plug it in, do your tuning, and put it away,” he says. “The Trinity, on the other hand, is designed to be mounted inside your vehicle. It’s a live data logger, and it will monitor thousands of parameters. It has two analog inputs that you can use for things like wideband sensors or a backup camera, and it has dozens of different gauges you can use for real-time monitoring.”

It equates to a device that offers not just tuning and real-time system information, but also performance telemetry data that you can review to help you dial your car (and your inputs) for even better performance. And for those looking to create custom tunes using DiabloSport’s CMR software, the Trinity 2 Platinum is the ticket.

When it comes to long-term support, Dolan says that DiabloSport’s work on the Gen III Hemi is an on-going operation regardless of which device you choose. “The latest models are always being supported, with products for model-year 2021 and beyond in development."

While it's clearly an ad for DiabloSport tuners, the details on the PCMs is interesting.