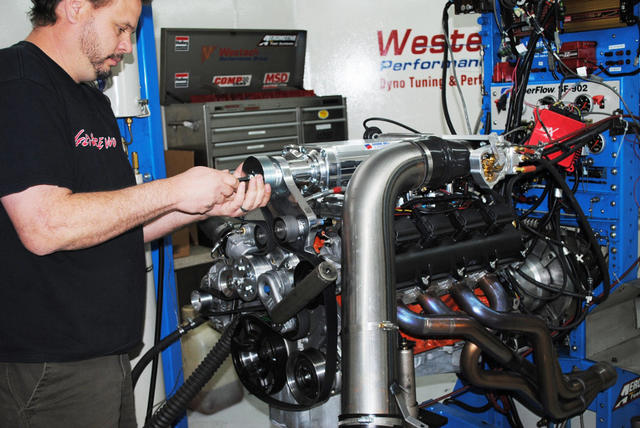 
If you had to choose a single word to epitomize the concept of automotive performance, one of the best choices would have to be Hemi! Oh, don’t worry, we fully realize this will get the Ford and Chevy guys scrambling for their torches and pitchforks, but try this simple quiz. As car guys, we go to great lengths to learn all technical jargon. We recognize the importance of L88s and Cobra Jets, but just trying asking the average civilian if they ever heard of an LS6 or Boss 9. After a few seconds with the blank stare, mention the word Hemi and watch their eyes light up. Credit a long successful history of racing and the ever-vigilant marketing department for not only creating the monster, but making sure it remains alive and well.

It can be argued a successful past is at least partially to blame (or congratulate) for the modern successor. Time and technology have allowed the new Hemi to deliver every bit as much performance as its original namesake. Truth be told, from a performance standpoint, the new Hemi is more than a match for even the original 426, to say nothing of the previous generations. That the new version does so with a significant reduction in both displacement and emissions is a testament to how far we have come since the original muscle car era.

Originally introduced as a 5.7L to compete with the General’s like-displacement LS1, Dodge eventually responded to GM’s 6.0L LS2 and 6.2L LS3 with displacements of their own. First came the 6.1L SRT8, followed by the 6.4L 392. Once again, the Dodge boys harkened back to famous Hemis of yesteryear. It is interesting that despite being the performance equivalent of the LS offerings by the General, the modern Hemis walk in the shadows of the LS in terms of popularity.

Examined closely, the LS and Hemis have one very important aspect in common, namely impressive head flow. Since airflow is one of the critical elements in power production, good heads are always welcome by enthusiasts. Add a simple cam and springs to an LS and you have the makings of a world beater. Guess what, the same holds true of a Hemi. Every bit as important is the fact the stock Hemi heads respond equally well to porting. A well-ported set of Hemi heads (like the 6.1Ls from Dr. Js) can flow over 350 cfm at just .600 lift!

To withstand the rigors of boost, the 6.1L was treated to a forged Scat crank, Speedmaster rods, and a set of Probe Racing pistons. Naturally, we employed a set of ARP head studs and Cometic MLS head gaskets.

The best blower motors usually start out as powerful normally aspirated combinations. To improve the power output, we installed an Xtreme Energy 273H-14 cam from COMP Cams. The hydraulic roller cam combined a .547/.550 lift split with a 224/228-degree duration split (at .050) and 114-degree lobe separation angle.

Dr. Js Performance touched up our 6.1L heads to the tune of 351 cfm at .600 lift. That’s enough to support more than 700 hp in normally aspirated trim on the right application.

Before adding the blower, we wanted to treat the Hemi to a proper break-in and establish a baseline in normally aspirated trim. To do so, we equipped the 6.1L with a factory SRT8 intake and (converted) throttle body.

Starting with a solid 6.1L foundation, we added boost from a Kenne Bell blower in an effort to eclipse the magical 1,000-hp mark. Our starting point was a 6.1L augmented with a forged steel crank, forged Speedmaster rods, and forged flat-top pistons. The forged rotating assembly was combined with an Xtreme Energy cam that offered a .547/.550 lift split, a 224/228-degree duration split, and (blower-friendly) 114-degree lobe separation angle. Feeding the 6.1L short block was a set of ported set of 6.1L heads (with ARP head studs and Cometic MLS head gaskets) that checked in with peak flow numbers of 351 cfm/245 cfm at .600 lift. Run in normally aspirated trim with an SRT8 intake, 1 ¾-inch headers, and a FASTXFI management system, the Hemi put down 509 hp at 6,500 rpm and 467 ft-lb of torque at 5,100 rpm.

After running the modified 6.1L in normally aspirated trim, it was time for some boost. While the 2.8L from Kenne Bell was more than capable of reaching (and exceeding) the 1,000-hp mark, we took the Bell boys up on their offer to run the larger 3.6L. Naturally, the 3.6L promised more power potential, but the gains from the bigger blower came from more than just displacement. The 3.6L also featured both Liquid Cooling (LC) and Seal Pressure Equalization (SPE).

On hand to dial in the air/fuel and timing on our Hemi was a FAST XFI management system. To ensure adequate fuel delivery to our 75-lb. injectors, the dyno fuel pump was augmented with a Kenne Bell Boost-a-Pump.

With the 6.1L ready for action, we installed the 3.6L supercharger from Kenne Bell.

Starting with the size difference, the larger 3.6L was able to supply over 25 percent more flow for each revolution. This allowed us to achieve our flow and power goals at a slower blower speed compared to the smaller 2.8L. This reduced the parasitic losses associated with driving the blower, so the gains offered by the 3.6L were even greater.

Naturally, the 3.6L must be employed on the proper application, which by the way is NOT an otherwise stock 5.7L Hemi running 8 psi of boost. The larger 3.6L Kenne Bell blower was designed for high-horsepower and/or high-boost applications, making it perfect for our modified 6.1L.

Bigger is one thing, but the 3.6L was also better thanks to extensive development Kenne Bell put into the design. These features include an industry-leading 4×6 rotor pack, LC, and SPE.

Bigger and bolder than the 2.8L, the 3.6L offered increased flow capacity and power potential, but would be out of place on a milder application.

The final trick applied to the 3.6L was SPE. The Kenne Bell, twin-screw design featured a front seal to separate the gear box from the rotor pack. Given its position, the front seal was subjected to internal pressure supplied by the supercharger. Kenne Bell designed their SPE system to equalize the pressure on both sides of the seal to eliminate the differential. Using a relief system, the pressure is vented from the back of the seal to the inlet tube or air filter. Relieving this pressure eliminates the chance of seal failure and rotor pressure from entering the gear box. According to Kenne Bell, the standard seal system works very well in the normal boost ranges (up to 20 psi). It is in the 21-30 psi ranges run in racing applications where the SPE system really comes into play. The SPE also reduces seal wear and friction under high-vacuum, cruise conditions. While all this technology sounded good on paper, we were anxious to see it applied to our motor.

Supplied with the standard kit, we ran this 4.5-inch inlet tube and optional cone filter assembly. According to Kenne Bell, the inlet system flowed over 2,000 cfm!

For our testing, the 3.6L was first installed and equipped with a 3.75-inch blower pulley. Since boost out of the blower is a function of the airflow into it, we made sure eliminate any restrictions. Maximizing flow to the blower was a Mammoth intake manifold and 168mm, oval throttle body flowing more than 1600 cfm. The standard supercharger kits (both 2.8L and 3.6L) come configured to accept the stock Hemi throttle body, but we wanted maximum airflow for our Hellacious Hemi. Rather than set the blower on kill right away, we tried a variety of different pulley sizes that produced different levels of boost and power.

As good as Hemis are in normally aspirated trim, they are even better under boost. The modified 6.1L was no slouch to begin with, posting peak numbers of 509 hp at 6,500 rpm and 467 lb-ft of torque at 5,000 rpm. Credit the ported heads, a COMP XE273 cam, and SRT8 intake for the impressive power. Things really took off once we installed the Kenne Bell supercharger. Equipped with the intercooled, 3.6L twin-screw, the 6.1L Hemi produced 1,003 hp at 7,000 rpm and 881 lb-ft of torque at just 4,700 rpm. That’s one Hellacious Hemi!

After dialing in the air/fuel and timing (on 118-octane Rocket Brand race fuel) with a 3.75-inch blower pulley, the supercharged Hemi pumped out 1,003 hp and 881 lb-ft of torque. Run to 7,000 rpm, the twin-screw was pumping out 22 psi of boost through the air-to-water intercooler. The 3.6L had plenty of boost and power left in reserve (this unit has exceeded 1,600 hp), but we were already plenty happy with our four-digit, Hellacious Hemi.