DeSoto Adventurer II Should Have Been Production

DeSoto Adventurer II Should Have Been Production 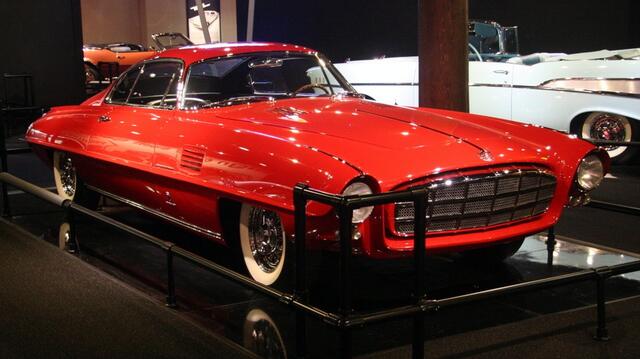 The DeSoto Adventurer II Should Have Been A Production Car
http://jalopnik.com/5921429/desoto-adve ... -pictures/


What do you get when you cross a European style GT coupe with a big American cruiser? You get something like the 1954 DeSoto Adventurer II concept, a Ghia-bodied, Hemi-powered monster that never saw production.

If nothing else, the long-snouted DeSoto concept car is proof that the bailout wasn't the first time Chrysler has colluded with Italians.

The Adventurer II had all of the trappings consistent with exotic cars of the day — cowhide upholstery, a machine turned chrome dash, a power retractable rear windshield, and matched luggage among other things — and even attracted the momentary attention of Morocco's King Mohammed V before being shelved for good.

For the better part of the past six decades, the one-off Adventurer II has been bouncing back and forth between collectors. I stumbled across it at the Gateway Auto Museum, amongst a collection glittering Detroit iron owned by Discovery Channel mogul John Henricks. Hendricks doesn't own the DeSoto, but is letting another rich guy he knows display it in his museum (I talked to him on the phone, but he didn't want me to reveal his identity).

Like most golden-age-of-american-motoring concepts still in existence, this one sold at Barrett-Jackson, the ultimate rich guy buying/selling experience, for a cool $1.3 million. The unnamed collector (who gushed about the car when I talked with him on the phone, but preferred to remain anonymous) decided to loan it to Hendricks, who keeps it in an off the beaten path museum in a more or less vacant corner of Colorado that used to be dotted with booming Uranium mines.

So it's doubtful that too many people will catch a glimpse of this beautiful car. But if you ever find yourself in Grand Junction, Colo. and feel like driving an hour down one of the most fun canyon roads to be found anywhere, go check it out.

Re: DeSoto Adventurer II Should Have Been Production

In '54 the Corvette was a I-6 power slug. Ford also had a Euro look sports car prototype that was Y Block powered. Wonder what could have been if they could have made these cars.
Top
Post Reply
2 posts • Page 1 of 1