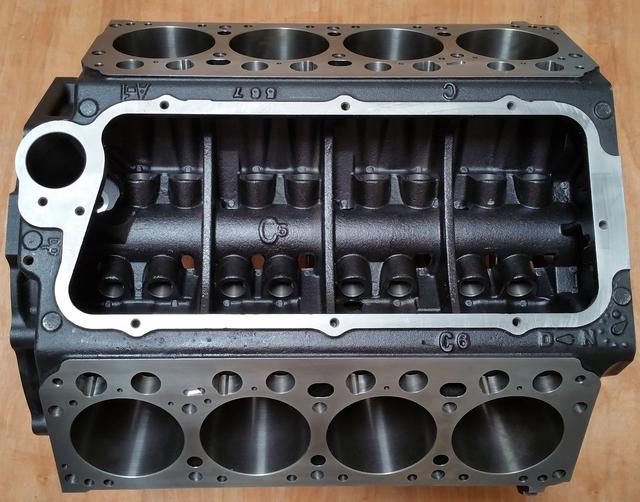 
Only produced for a two-year model run between 1957 and 1958, the 392 Hemi engine from Chrysler proved to be incredibly stout in the drag racing arena and has been highly sought-after even since.

As one might imagine, ‘scarce’ would be a good word to describe the availability of engine blocks – until now. Bear Block Motors, led by developer and longtime machinist Doug Park, has cast the very first all-new iron-block 392 Hemi engine in 57 years, albeit with a number of improvements intended to bring the block’s design forward into the 21st century.

“This block is the prototype, and we’re mocking it up currently,” explains Park. “Everything is good, but we do plan to add some more meat into the lifter valley in the final casting design.”

The company is working towards an end-of-year release to the public. Perfection is what Park and his team strive for – the machinist has decades of experience and doesn’t want his customers to experience any issues with the product once it hits the market, so great care is taken during the development process to test the engine with all different types of rotating assembly, gasket, and cylinder head configurations.

“We want to make sure every single detail is ironed out. So far we’re about 90 percent finished, and within a few weeks we’ll have the mockup process wrapped up,” explains Park.

The block will be cast from the same material as the company’s Ford FE block, capable of handling over 1,000 horsepower with ease.

“I enjoy the vintage engines. I can see that there’s a lack of supply, but there are a lot of enthusiasts out there. We got started with the Ford FE engine block, and after talking to potential customers, these Hemi blocks were the next logical step,” Park explains.

Material has been added to the block’s casting in areas where it can improve the strength, and Park says the block has been sonic mapped and shows solid wall thickness throughout. 4.125-inch bores are easily attainable, and he says the deck surfaces are .600-inch thick — good to keep the deck stability under control in boosted applications. As the stock block was delivered with a 4.000-inch bore, the step up in displacement capability is also a welcome sight.

“There are a number of different grades of cast-iron material; we use a diesel-grade cast iron, which costs more, but I want our customers to have peace of mind,” says Park.

As the 392 has been adapted to all sorts of vehicles from street rods to A-Fuelers over the years, the emergence of this new piece from BBM has to be a welcome relief for nostalgic owners who are tired of offering up body parts in order to fund the purchase of a well-used block.

Four-bolt splayed billet main caps have also been added to the design to improve strength.

The blocks are cast overseas in a state of the art foundry in South Korea, and Park says that he’s established a great relationship with the foundry that’s capable of casting the quality he’s looking for in the product. In fact, BBM also manufactures a well-received Ford FE engine block that’s cast in the same facility; they’ve sold dozens of these blocks without issue.

“We use nothing but virgin materials in our blocks,” says Park. The virgin material allows the casting foundry to be sure of the material quality, eliminating porosity concerns and producing a higher-quality product in the process.

So guys......Anyone know the true story on why this project never came to completion?
Thanks!
Top

These typrs of projects are HUGELY expensive and there is never a guarantee of capturing even the initial investment let alone actually making a margin. Some projects can drag on for years (I have several that way) being attended to as time/money permits.
www.qualityengineeredcomponents.com
Early Hemi Parts and Pieces,