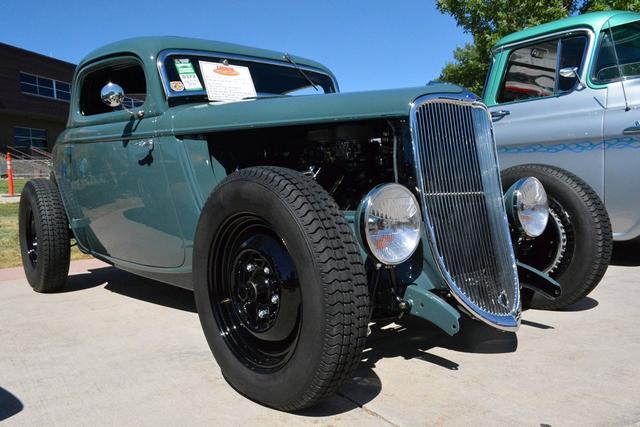 
Everyone has a different reason for building their prized vehicles. Some want a race car, while others want a vehicle they can take out to local shows and park in the winner’s circle. But for some, the urge to build runs deeper than racing or showing – right down to the pursuit of a very specific car outfitted with very specific parts. For 75-year-old Pueblo, Colorado hot rod enthusiast Jim Smith and his wife Terry, they fall into the latter category, with Jim having always wanted a Hemi-powered 1933 Ford. Check out just how Smith’s determination and perseverance in obtaining that exact car paid off below!

Having had the hot rod bug for many years, 53 to be exact, Smith has had his fair-share of custom vehicles in his stable, including a 1938 Dodge pickup, a 1949 Buick fastback, a 1953 Studebaker and a 1960 Chevy Bel Air. But the ultimate hot rod for Smith has always been a 1933 3-window coupe with a Hemi engine under the hood – a vehicle that finally came to fruition for him in March of 2015.

After purchasing the coupe for just $450, Smith started the build process on the Hemi-backed Ford in early 2013. The first thing on the build list was the car’s underlying chassis, a conglomerate of unique parts and pieces that make the car even more unique than just its engine/body combination.

The frame itself has been pinched in the front and kicked up in the rear. Up front, a 4-inch dropped axle gives the car its iconic hot rod stance while a Winters Performance quick change rearend provides the rear of the car with superior form and function. For control arms, the ’33 uses hardware from a ’37 Ford for both front and rear while Monroe tube shocks and hand-built sway bars make for a comfortable ride while picking up any remaining slack the car may experience. Finishing off the framework is a Vega steering box.

Next in the build process came Smith’s favorite part– the engine! A 1957 Chrysler 392ci hemi engine to be exact, this “little engine that could” is one of the most unique components that sets Smith’s street rod apart from the rest.

Bored 80 over and boasting a Crower camshaft, Weiand intake manifold and dual 4-barrel 500cfm Edelbrock carburetors, the Chrysler Firepower engine is most definitely running a few more horses than its factory-rated 325hp – not a bad place to start when powering a custom street rod. While the rotating parts and cylinder heads are stock, the engine has also been upgraded with a Mallory ignition and Sanderson headers with a custom-built exhaust system crafted by Smith himself. Backing the potent pony pusher is a Tremec TKO 500 5-speed transmission.

Once the engine was acquired and modified for the street rod, the remainder of the build was dedicated to body work and aesthetics.

Underneath the special “Gray Green” paint scheme, laid down by AAD Automotive in Falcon, CO, the ’33 flaunts a 3-inch chop, suicide doors and body-color frame rails that flank a classic Ford front grille and stand-alone headlights. Also notable is the car’s two-piece hood with brightwork trim running down the center and open sides for an uninhibited look at the classic Hemi both at shows and while the car is cruising down the road.

With brightwork limited to the grille, hood trim, door handles, headlight bezels, side mirrors, rear bumper and taillight surrounds, the simplistic aesthetic of the car allows for focus to remain on the undeniable workmanship and style of the classic, as well as its unique components.

Inside, the coupe was treated to a sophisticated makeover by Eddie’s Rods and Customs of Pueblo West, CO. The entire interior was redone in black textiles, including black Italian leather, which was used for the tuck and roll upholstery on the Glide Engineering bench seat, as well as the door panels and headliner. While the original ’33 Ford dash remains, it has been outfitted with Classic Instruments hot rod gauges.

As understated as this street rod may look upon first glance, it’s truly the unusual details that raise the car to another level.

A truly unique car in the world of early 30s Fords, this little hemi-powered 3-window is proving to be a particularly captivating street rod, and the awards it has won prove so. In just the last two years since its completion, the car has taken home a number of great honors, such as a Goodguys Builder’s Choice award, Classic Hot Rod award and a Goodguys Memorial award, as well as a Goodguys Gazette award and a “Steel the Show” award sponsored by Wheel Vintiques.

With so many outstanding accolades, we have no doubt that we’ll see this awesome little hot rod in many more winner’s circles in years to come!

Many thanks go out to Jim and Terry Smith for allowing us to poke around their beloved ride on more than one occasion at the 2016 Goodguys Colorado Nationals. It’s unique rides like this that keep us intrigued and falling in love with the hot rod scene over and over again!