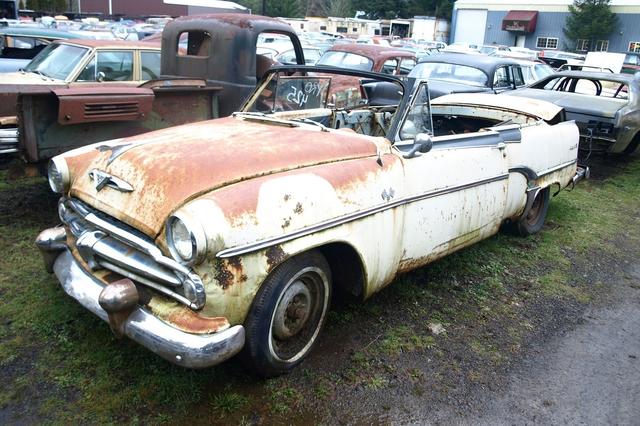 
The story behind the story—that’s what the Junkyard Crawl is all about. To a casual observer, junk cars are nothing more than rusty eyesores to be crushed and hauled away as soon as possible. Gotta protect those property values, right? But junkyard crawlers know better.

This month, we present a 1954 Dodge Royal convertible with the Indy Pace Car option. One of only 701 built, these open-air Dodges came standard with Dodge Red Ram Hemi power and numerous unique features not found on any other 1954 Dodge.

First launched in 1953, the new Dodge Red Ram Hemi V8 measured 241 cubic inches and inhaled through a restrictive single two-barrel carburetor. It was a humble start. And again for 1954, the Red Ram—still at 241 cubes—suffered with a single two-barrel…unless it went into one of these Indy Pace Car ragtops! For the first time, the Pace Cars stepped up to single 450cfm Carter WCFB four-barrel carburetor for a 20-click boost to 170 horsepower.

But there was a hiccup. Dodge lacked its own four-barrel intake manifold. Think about that, Dodge—the company who only a few years later would crank out thousands of tandem dual-quads, long rams, cross rams, Hyper-Paks, and Six Packs—didn’t have a lousy 1×4 intake manifold in 1954!

So while the Dodge elves toiled on better intake manifolds (a cast-iron four-barrel unit finally arrived in 1955), for the 1954 Pace Cars a deal was struck with California speed equipment merchant, Offenhauser Sales Corp.

Long known for its Indy-dominating 270-cube Offy inline four-cylinder racing engines, Offy was also a major player in the hot rod aftermarket. For the Pace Car editions, they whipped up a lightweight aluminum dual-plane manifold casting. And yes, that nifty induction setup is still present on this junkyard discovery.

Lets’ take a peek at this amazing rare junkyard discovery to learn more about it and its back story.

* The first Chrysler product to pace the Indy 500 was a 1926 Imperial driven by…Louis Chevrolet. Wha??? Remember, though Louis co-founded Chevrolet in 1911 with his younger brothers Gaston and Arthur, and legendary Detroit wheeler dealer William C. Durant, by 1926 Louis had sold his interest in the company that bore his family name.

* Before the major American automakers had their own (private) test tracks and proving grounds, the Indy 500 race track facility was often rented for durability trials. In 1911 the first 500 mile race was held, and ever since, automakers clamored to have one of their models granted pace car duties. The assumption they could “go the distance” grew out of the track’s early days as a testing facility.

As Dodge’s first high-performance offering with a standard four-barrel carburetor and dual exhaust, this piece of history is just as important as any Charger R/T, Coronet Super Bee, Challenger T/A, or Charger Daytona. It’s also accurate to say that the chain of Dodge performance cars that’s currently highlighted by the nine-second 2019 Demon wouldn’t have happened without this open-air Hemi car to light the fuse.