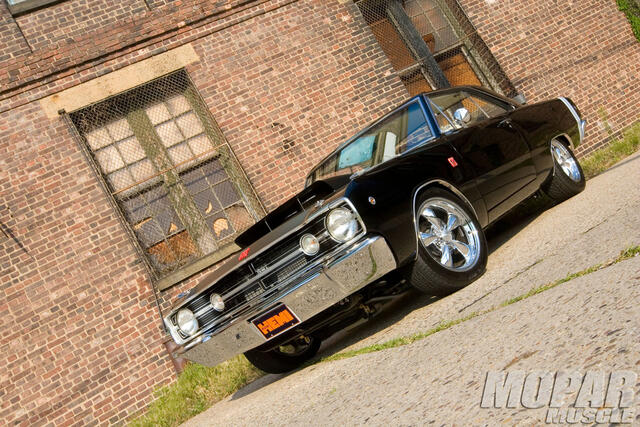 
Restore or modify? That's the question Tim Nist faced when he brought a '68 Dodge Dart home a couple years back.

Tim, who'd built other Mopars, was looking for a new project when he got a lead. "Jimmy Koziol over at Jack's Auto Parts in Toms River, New Jersey, called and asked if I wanted a Dart," he says. "Jimmy said, 'We've got one that came down from New England.' I didn't know if I wanted to do an A-Body, but I went to take a look at it. The body looked strong."

That was because it had been away from the elements-and off the ground. "It had been sitting in a semi trailer for 15 years," Tim says.

Though the Dart was incomplete, there were clues to its previous use-and origins. "When I got it, I knew it was green only by what was in the engine compartment and what overspray there was under the car," says Tim of the then-engineless A-Body. He adds, "Whoever had it back in the '80s had it on the track, because there were a lot of racing-parts stickers on the inside of the trunk lid." Other clues included non-stock holes drilled in the firewall, a pair of blown-out Gabriel "Hi-Jacker" air-adjustable shocks in back, and a coat of red paint on the 8-3/4-inch rear end's housing. "It was the kind of thing that people did when they were bored on a Saturday afternoon," says Tim.

A look at the Dart's VIN confirmed that it was originally a 340-powered GTS hardtop. Two things it didn't have were a fender tag, or a factory broadcast sheet, which would have documented when and where it was built, and what Ma Mopar put on it. "I couldn't reverse-engineer the car out of what he had," says Tim. "We knew that it was an original '68 GTS. It had power brakes but no power steering, and there wasn't a brake booster in there." It did have a manual-brake master cylinder and a support rod to connect a power brake booster to the bottom of the firewall (to prevent underhood vibrations from causing fatigue that could crack the attaching bolts). Why the swap? "A lot of racers did that back in the '70s to cut weight, and so they could run brakes that they could back off and run on the strip without any drag," says Tim.

As Tim thought about his Dart project, restoring it was out. "There was a lot of stuff that I could have done to bring it back to stock," he says. "It would have been nice, but there was no buildsheet. It's not the only car that I've ever done, or owned, so I might as well do some other things with this car."

Most noticeable of those "other things" sits beneath the AAR Fiberglass hood. "I know John Arruzza well," says Tim. "He's done some engines for me before. I called him, and I told him I wanted to do another Hemi project, and this one is going to be different-I'm going to put a cross-ram on it." Tim had found a Hemi cross-ram intake on eBay, and John told him that carburetors atop one are harder to tune than those on the OEM 2x4 intake. "He turned me on to "Hemi George" in California, who does cross-ram tuning, and he set up the carburetors and recurved the distributor," Tim adds.

The Dart's chassis got its share of attention-something needed with a Hemi going in. As Tim explains, "I wanted a different way to put the engine in, and I read that the whole Reilly Motorsports AlterKtion system goes in easier with a Hemi, rather than trying to squeeze it in the way Hurst did (in 1968 -Ed.). I said, 'If I'm going to do this, I might as well go a little bonkers with it."

Reilly Motorsports also supplied the rear suspension hardware that holds the Moser-prepped Dana 60 in place. "I went to Bill Reilly, and he showed me things about what goes on with the rear setup." Tim's glad he went with the RMS setup in the back. "I've had projects where I've left the front suspension stock, and added CalTracs or something like that in the back, or even leaf springs, but they give an older feel to the car," says Tim. "If I'm going to go crazy with this car, then I'm going to go crazy.'

In all, Tim's Dart project took almost a year and a half, turning the engineless dragstrip survivor into the black beauty you see here.

But its beauty isn't just in its styling, or the hardware inside it. Tim says the real beauty is driving it. "If you've ever driven a car with the AlterKtion system in it, it's actually like a new car. It's a little hard in the handling, but it takes corners real well, and there's no rattling and noisemaking that you usually get from an older Mopar."

As for the Hemi under the hood? "It's streetable and fun to drive," says Tim. "One time I drove it to a show and it was 50 miles each way, and I got about ten miles a gallon. You can't argue with that!"

Tim says he's discovered one thing over the years, especially while building his Dart. "A-Body owners are in a class by themselves," he says. "They can squeeze a dime better than anyone I've seen. I remember one time I was selling some electric exhaust cut-outs, and one guy asked how much they were, and I said '$400.' He said, 'That's what I paid for my car!'" mm

"It's not the only car that I've ever done, or owned, so I might as well do some other things with this car." -Tim Nist