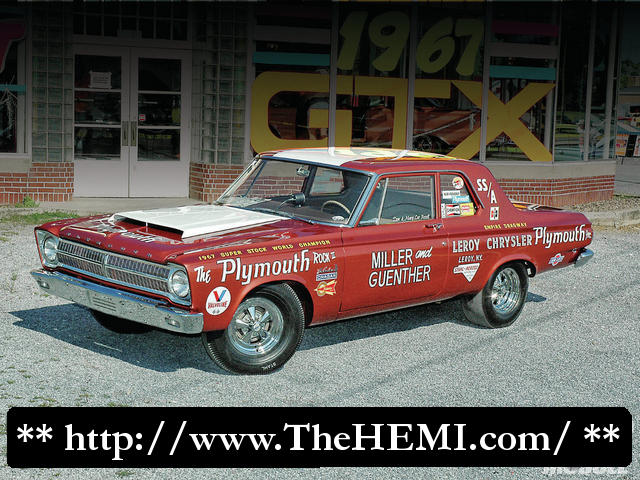 
Fast street cars were part of the '60s, and most of us know that the manufacturers were often led by the Win on Sunday, sell on Monday philosophy. After all, if your brand was visible beating the other brands, chances were that the identification with success would translate into dealership traffic. As a result, Detroit played seriously in motorsports back in those days, and continues to field cars and cash into NASCAR and drag racing programs even now.

For straight-line fans during the 1960s, Super Stock was the place where you could find the most radical of the production cars. While A/FX garnered attention as it evolved from parts bin specials into the first funny cars, the top of the door slammer classes for many regular competitors was the Stock division's top class, one that required a set number of vehicles to be created, even if they were non-streetable race cars. They were still fairly close to what was available down at the local new-car seller's lot, and Chrysler was the king of the breed.

After all, from 1963 to 1968, Dodge and Plymouth Super Stocks were built every year except 1966, when strikes delayed the process until it was too late to release a package. The Super Stocks were developed quite scientifically by the engineers who made up the voluntary Ramchargers and Golden Commandos teams (these were not factory-funded operations, but small groups organized by enthusiasts who happened to work at the company), and were dominant race cars. After the Hemi arrived in 1964, there was a mid-year run of aluminum-paneled S/S cars built, but for 1965, with a boycott of NASCAR freeing up finances, Chrysler pulled out all the stops, releasing a run of 100 Dodges and Plymouths under package code A990. Lightweight all-steel body parts, cross-ram Hemis with aluminum heads and magnesium intakes, interior delete items, and more made them purpose-built to go fast.

However, with teams and factories both looking for advantages, and Super Stock being the top echelon of Stock Eliminator, sparks flew between the haves and have-nots. Amateur racers in older cars had little chance against the well-heeled pilots in modern equipment with more engineering. So, at the end of 1966, NHRA pulled these cars from Stock classification and created a separate division named Super Stock, allowing intake changes as long as the OEM carb(s) remained in place, any cam/lifter combo, and any tire that would fit into the stock wheelwell. For 1967 ten classes, five stick (SS/A-SS/E) and five automatic (SS/AA-SS/EA) based on a factored horsepower-to-weight rating, were part of the new division. This was perfect for muscle cars, and for Detroit's latest products to be exposed. George Hurst thought enough of it that Hurst Industries anteed up $10,000 for the first-ever multiple class Super Stock World Champ that year at the NHRA World Finals.

Bill Jenkins, Ronnie Sox, and Hubert Platt were among the factory connected drivers with exciting new 1967-era cars. Jenkins was running an undercover R&D deal and a fresh 396 powered Camaro, Sox was just back from the funny car wars a special Hemi Belvedere, and Platt was moonlighting from his long-nose Mustang warhorse into a 'glass-hooded 427 Fairlane. In the end, it was Ed Miller and Kip Gunther of Rochester, New York, who led that final quarter-mile lap of the season at Tulsa, Oklahoma, in a four-speed Hemi Plymouth for the crown.

While unheralded to this point, Miller was no stranger to the sport. In the early 1960s, Ed was drafted, and when he came back from Uncle Sam's tutelage in 1965, he put together a '63 Max Wedge. The following season, one of the year-old '65 A990 Plymouths that he got from Arlen Vanke became his vehicle of choice. Ed won the Super Stock class at Bristol and Indy in 1966, and then parlayed good attendance at tough Division 1 regional events the following season with new partner Kip Guenther into a points total of 2,200 for the division crown, besting Bill Jenkins' second-place 2,100 in the process and guaranteeing Miller a spot in the Super Stock Eliminator field at the 1967 World Finals. Miller also set a couple of records that year, and the engine had been to the teardown barn so often that Ed needed to replace all the torque-specific bolts for proper fastening. This car also saw duty on the NASCAR Ultra Stock tour.

"When we left the Division 1 points at Connecticut Dragway--the last race of the year--we didn't know we had won the division championship. I had won the first round race against Jenkins, and lost to Sox in round two," says Ed. "We had gotten rained out at Englishtown, and despite running the NASCAR points series on the rain date, we ran a race in Division 3 at St. Thomas, and that event gave us five events and the extra 100 points to win the championship. We didn't even have a good motor; we had scored a cylinder, so we put another engine together out of our parts for Tulsa."

Somewhat bucks-down, Miller and Gunther arrived in Oklahoma with a tired re-welded motor and crankshaft, no shifter, and a host of impatient competitors from around the country vying for the $10K purse. Hurst fronted the team a fresh reverse-lockout stick and Line-Loc. Once the final field was set and under cloudy skies, the Miller & Gunther entry made a strong check-out run Sunday morning but lost oil pressure in the process, necessitating a major pit thrash to figure out what was wrong before eliminations began later that day.

"[After that run], I coasted to a stop, and Kip came down and got me," says Ed. "We took the pan off, checked the pump, and finally pulled the valve cover and found a broken arm that let a lifter come up and show the oil pressure loss. Four or five people came around to help, and we got it ready to go."

Fixed and fired up, Miller beat Don Grotheer's Cable Car RO '67 Plymouth and Larry Cooper's Dodge in the opening two frames. He took a satisfying victory over a red-lighting Jenkins in the semifinals, and then parlayed a careful driving job in the drizzling final round to beat an up-and-coming Dick Arons in his SS/EA Camaro. The $10,000 cash prize was the largest ever in NHRA competition, and won by a two-year-old car, somewhat to the dismay of both NHRA bosses and perhaps even George Hurst.

Several years ago, noted collector Don and Mary Lee Fezell had a chance to buy the car; Don has a penchant for historic race cars that originated in the Northeast. And this, the very first Multiple Class Super Stock Eliminator World Champion, was perfect. At the time he purchased it from owner Pat McGroeder, it needed work, and now has a fitting place in the Fezell noteworthy collection in western Pennsylvania.

"That [win] was really great, because we had won [our] class at the Winternationals that spring, and then we posted runner-up for Super Stock Eliminator, which was disappointing" says Ed. "Kip and I agreed we had lost the first one, but we would win the last one with the big money. We ended up doing it. It was a once-in-a-lifetime deal. A couple of years, even Don Garlits told me he remembered it was a big deal."

Engine: Don needed a motor that was right for his restoration and went to the source--Ed Miller himself. Using the tricks from back in 1967, Ed built the replication around a 1964 Hemi block like he had used, adding period parts (not much was allowed to be changed in Super Stock yet) and a Comp cam and lifter package. Like most of Don vintage race cars, it is at the real compression ratio and sounds just like the original did.
Transmission: This one has an 833, and is one of only three four-speed A990 package cars known to still exist in that form. Miller also rebuilt this unit for Don.
Rear: One Sure Grip Dana 60 with a 4.56 ring; dumping the clutch mandated it. It was gone through as well.

Suspension: The car retains its original-style Hemi rear springs, as well as vintage Hurst shocks. Don has raced since the 1960s and maintains that level of aftermarket technology on his restorations.
Brakes: Stock brakes, plus a Hurst LineLoc
Wheels/Tires: Cragar wheels 15x3 front, 15x7 on the rear give the right look. For rubber, its a set of super-rare Stahl front 7.10X15, with M&H 11x30 rear stickies.

Paint/Body: Originally, the color was copper; this was the base when the racing paint was restored by Bob Carpin of Burndale, Pennsylvania. The replication of the original lettering was carefully done by hand, courtesy Terry Imler of Altoona, Pennsylvania.
Interior: The inside is still all original except for carpet and headliner.