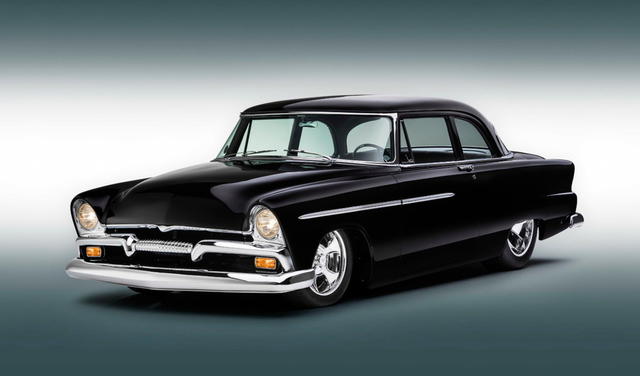 
You know when someone like Bobby Alloway turns down a customer wanting a 1955 Chevy built that kind of says something about Tri-Fives in general, as far as their blank canvas potentiality goes. If you think about it, in order to achieve what hasn’t already been done, you’d potentially wind up with a vehicle that barely resembles its former self by the time you accomplished doing the never-before alterations (probably not a bad thing if you’re going after the Ridler …).

A 1955 Bel Air—even in its as-sold attire—is a bucket list car for many, myself included … especially if you throw on a set of bigs ’n’ littles with a nice, nose-in-the-asphalt rake. But that’s not where this is going. When you’ve been at the business of building hot rods for as long as Alloway has, repetitiveness isn’t what keeps the creative juices flowing—but a good challenge can sure do the trick … even more so when it’s a self-imposed one. Case in point: When Louisianan Gene Suelzle came to Alloway’s Hot Rod Shop wanting to have a 1955 Chevy built, Bobby saw this as an opportunity to do something with another 1955 he had at the shop—a 1955 Plymouth Savoy Club Sedan. Without already having seen the photos, I’m sure that would’ve evoked some rather interesting reactions from a number of you reading this—but as you can see Gene agreed to the alternative (after further artistic convincing by Eric Brockmeyer), and Bobby’s challenge netted perfect results, not to mention the baddest ’50s Mopar I’ve ever seen.

As is customary with the majority of Alloway’s builds, Gene’s Savoy now resides on brand-new mandrel-bent chassis courtesy Art Morrison Enterprises, complete with AME’s coilover IFS and four-link’d Currie 9-inch, 13-inch Wilwood discs, and DSE power steering. And when it came to the powerplant, this build stayed the theme by updating the Club Sedan’s Hy-Fire V-8 (and more than doubling its cubic inches) with an Indy Cylinder Head 520ci all-aluminum Hemi assembled by Keasler Racing and Machine. Also receiving a needed update, the once-modern push-button shifted transmission option was replaced with a seemingly less convenient floor-shifted TREMEC five-speed from American Powertain.

About the only portion you really see of that aforementioned chassis when viewing the sedan from the exterior are the Alloway signature Billet Specialties wheels—at least the portions that aren’t tucked up nice and snug in the Plymouth’s wheelwells. As for the entirety of the external makeover, it didn’t take a whole lot other than some minor emblem deleting, adding inverted 1956 Chevy side trim, fresh chrome and polish, and, of course, the requisite PPG-based Alloway black paint to make the visual statement Alloway’s known for. The internals, on the other hand, got quite a bit more redesigning with Steve Holcomb/Pro Auto Upholstery’s full-leather interior, T-Bird bucket seats, and custom-built center console replacing the old fabric-trimmed bench accommodations; Classic Instruments one-off gauges filling the dash with a cut-down Corvair steering wheel in close proximity; and a Vintage Air unit taking place of the old trunk-mounted Airtemp factory A/C.