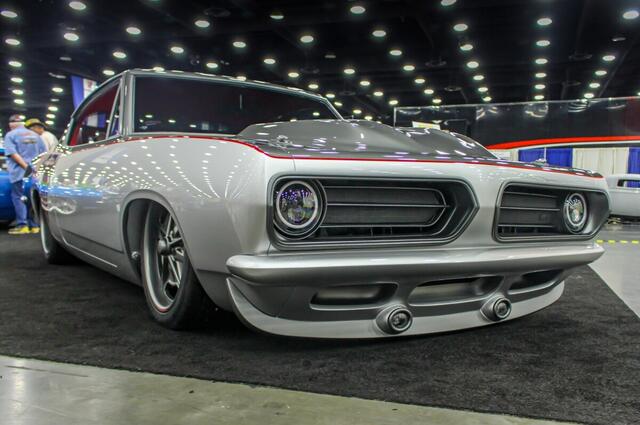 
Third-gen Barracudas seem to get all the limelight these days. With certain models easily commanding seven-figures, these portly E-body Sphyraena are currently the top-of-the-food-chain when it comes to Mopar muscle.

We’ve always liked first-gen Barracudas with their fishbowl rear glass, but concede they’re a tad frumpy, and we could never get past the obvious Valiant-family resemblance. As the years creep by, the 1967-1969 models have really grown on us. Although it remained Valiant-based, Plymouth traded its heavy-handed styling for a set of groovy new threads.

A coupe and convertible joined a less glassy fastback to complete a formidable trio. Sporting a Pontiac-esque split grille and a loop rear-taillight treatment, the styling killed. Although never a match (saleswise) for the Ford and GM’s ponies, late-’60s Barracudas just get better with age.

This summer, on the grounds of NSRA’s 50th Anniversary show in Louisville, Kentucky, we discovered a hellacious restomod 1968 Barracuda preening under the lights at the Axalta display. Dubbed “Hemi-S,” and built by red-hot builder Garret’s Rod Shop, it was the latest knockout from the Columbus, Ohio, shop.

Founded by Garret Kitchen 20 years ago, the shop has grown to be a national player on the custom car scene. We had a chance to catch up with Garret’s son Karl, and he filled us in on the backstory of “HEMI-S.”

Owned by Byron Spade from Columbus, the Barracuda (originally a Formula ‘S’ 340 model), had been sitting around for a few years — a casualty of the Great Recession. Garret and Byron were underway with a 1964 Nova build, but saw the Barracuda and said: “That’s badass, let’s switch gears and finish that first!”

The car stirred other memories as well. In 1968, Garret won the “Plymouth Trouble Shooting Contest” in his high-school auto mechanics class. Ironically, the trophy incorporated a model of a 1968 Formula S Barracuda. To circle back and create the baddest 1968 Barracuda on the planet years later added an ironic, sentimental facet to the build as well.

With the project greenlighted, the guys at Garret got to work. Every car needs a stout foundation, so they called Art Morrison and selected its Sport Frame model. From there, they bolted in RideTech Ride Pro suspension system and topped off the setup with Wilwood brakes.

For motivation — and to keep it all Mopar — a late-model, Gen-III 6.1L Hemi was chosen. They added a Magnuson TVS2300 supercharger and dolled it up with custom coil covers and accessories to match the blower. With an estimated 600hp, this fish has some stink. Look closely at the smoothed engine bay, and dig the black and red color scheme, with nary a wire or fastener in sight. Super sanitary execution here.

Next up, they added a Tremec, manual six-speed gearbox, a 2.5-inch stainless exhaust system from Flowmaster, a 9-inch Strange rear axle as the chassis began to take shape. Lastly, the HEMI-S rolls on Billet Specialties wheels (18×8 up front, 20×10 in the rear) with big gumball, Falken Azenis rubber all the way around.

For wiring, Garret’s Rod Shop exclusively uses Ron Francis Wiring. “We’ve used Rod Francis wiring exclusively for the last 20 years and are ardent fans,” Garret tells us. “The quality, simplicity, and reliability are the best in the business. Knowing we have the wiring sorted from the beginning, prevents many of headaches down the line. We used the ‘Express Wiring Kit’ on HEMI-S, and installation was a breeze.”

With the running gear sorted out, next up was the body and interior. Although the sheet metal seems darn-near stock, looks can be deceiving. This is where Garret’s Rod Shop finessed an already killer shape with subtle-yet-effective mods. Look closely, and you’ll see a redesigned front clip with front spoiler, ram air hood, and tucked bumpers.

A custom exhaust valance with a rear spoiler complete the mods. The tinting of the “fishbowl” rear glass cleverly incorporates little barracudas, a nice touch. The taillights use 200-plus LED taillight bulbs.

For paint, they chose Axalta’s Tungsten Gray in two shades and then added the pièce de résistance — a painted HEMI billboard graphic on the rear quarters. While never offered on second-gen fish cars, the graphic is a nice nod to a golden era when Mopar ruled the world and looks perfectly at home here.

Not only is every square inch bespoke custom, but the use of machined and hand-formed aluminum and 3D-printed hardware is also incredible. Dig the pedals, door pulls, seatback handles, and window cranks for an idea of the attention to detail here. Finishing off the look is acres of cherry red leather, cloaking all surfaces.

With the 2019 SEMA hootenanny right around the corner, HEMI-S will be holding court at Ron Francis Wiring’s display in Vegas. Be sure and stop by to check out the car, along with the latest and greatest from Ron Francis Wiring.

Until then, congrats to Garret’s Rod Shop and Byron Spade for HEMI-S and the well-deserved accolades.

Another great HEMI from the past. I'm not sure how this one was able to sneak past me?
While I'm not a huge fan of the Valiant based Barracudas, this one is really nice looking!