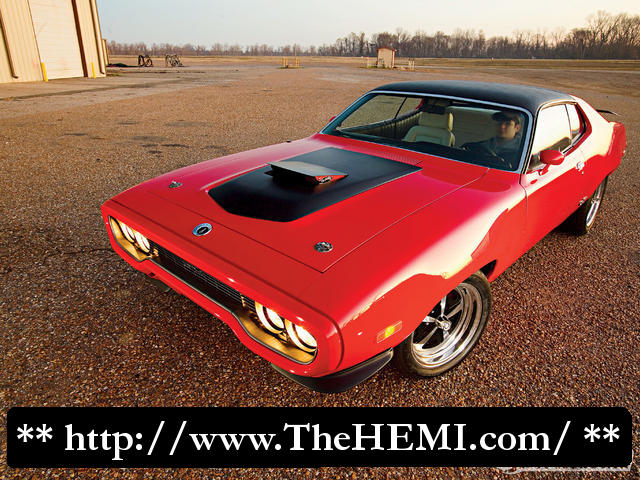 
Long before the Gulf Coast got a redcoat-style tarring by greedy Englishmen, it was infamous for its miserably steamy climate. As no surprise, Louisiana resident Matt Delaney makes it quite clear that air conditioning is one of the favorite features that his 1972 Plymouth GTX offers. Sure, you can get him to talk about the car's 618hp late-model Hemi and how efficiently it puts the power down exiting hairpins, but the talk always circles back to how comfortably the climate-controlled GTX chills its occupants. Somewhat ironically, whether it's via A/C or an extreme-duty radiator, Matt's spending habits have necessitated rigging up a cooling system directly to his bank account in order to avert spontaneous checkbook combustion. He has $150,000 tied up in the GTX, and he's built close to 50 high-end restomod Mopars over the years, 10 of which were Hemi 'Cudas. Unlike most people who can afford to do so, however, Matt doesn't build them to win trophies or stroke his own ego. A certified mechanical engineer, his goal is to continually push the envelope of ingenuity in an effort to build the perfect street machine. In his latest attempt, Matt has come pretty darn close.

Although his day job as a real estate developer keeps him plenty busy, Matt has built so many cars through the decades that it eventually became cost-effective for him to start up his own shop, Delaney Auto Design. With dozens of completed projects under his belt, he's learned that it sometimes makes much more sense to build clones rather than originals. "With a Pro Touring build like this, you have to ask yourself: 'What parts are you going to keep that's factory original?' If the answer is nothing, then it makes no sense to pay up the yin yang for a rusted-up jalopy just because it's an original 440 car," he says. "A lot of these original cars have been sitting in salvage yards for years, and have had tons of stuff stolen off of them. That's why I chose to buy a Satellite to turn into a GTX."

Part of what turned Matt's Hemi 'Cuda into a lumbering giant on the road course was the big, heavy elephant motor underhood. To avoid that same mistake this go-around, he installed a lighter, late-model Hemi into the GTX. It started life as a Mopar Performance 392 crate motor, but has been bored to 4.090 inches and fitted with a Callies 4.050-inch forged crank. It sweeps the 10.0:1 Diamond pistons and Eagle steel rods up and down the bore for a total of-surprise, surprise-426 ci. Since driveability is paramount in Matt's street machine builds, he retained the 235/235-at-.050 hydraulic roller cam that came with the 392 crate. The stock heads were ported to flow 330 cfm, and they're fed by an XV Motorsports single-plane intake manifold converted to EFI, and a Holley four-barrel throttle body. A testament to the cylinder heads' outstanding airflow, the motor puts out 618 hp and 585 lb-ft of torque despite a modestly sized camshaft. Bolted behind the new-age Hemi is a Keisler-modified GM 4L60E transmission with paddle shifters, which sends torque to a Chrysler 8 3/4-inch rearend with 3.21:1 gears.

Wow, this is a bad butt GTX!

by Dr. Righteous
THIS GUY STOLE MY IDEA!!!!!

I have a '72 Satellite Sebring Plus in the garage I plan to drop my 5.7L Hemi in.


scottm wrote: Wow, this is a bad butt GTX!

Scott, That is NOT a GTX. That is a CLONE.
BTW, in '72 the GTX as it's own model was done away with by Plymouth; and it was made a "upgrade package" to a RoadRunner. So it was more a "RoadRunner-GTX version" So that clone is more of a knockoff of a '71 GTX.
I am AGAINST cloning cars. It is ALWAYS a misrepresentation. Modding a car is FINE! BUT changing name plates and trying to pass something off as something it is not is DISHONEST.

Dr. Righteous wrote:I have a '72 Satellite Sebring Plus in the garage I plan to drop my 5.7L Hemi in.

My brother drove a '73 Satellite with glasspacks in high school.
I never got to drive it; my dad wishes that would have kept it.


Dr. Righteous wrote:I am AGAINST cloning cars. It is ALWAYS a misrepresentation.

I'm not completely against building clones. I think it's a great way
to pay compliment to a vehicle you really like and, perhaps, you'd
never be able to own otherwise. Although, in reality, I'm more of
a clone/restomod guy. I prefer old cars with modern powertrains.

by 392heminut
I don't think you can even classify it as a 'clone' with a Gen III hemi in it!
All times are UTC-05:00
Page 1 of 1
Powered by phpBB® Forum Software © phpBB Limited
https://www.phpbb.com/