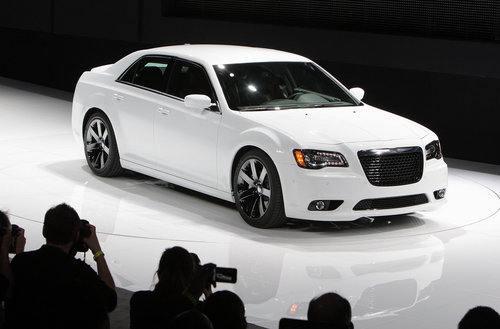 
The key feature of the 2012 Chrysler 300 SRT8 is the 6.4L Hemi V8 developed by Chrysler's Street and Racing Technology (SRT) division. This engine, which originally made its production debut in the 2011 Dodge Challenger SRT8, produces 465 horsepower and 465lb-ft of torque -- improvements of 40 hp and 45 lb-ft over the 6.1L Hemi found in the previous SRT-variant 300 sedan. This powerful new engine is mated to the same 5-speed automatic transmission as the outgoing model but wheel-mounted paddle shifters have been added to give the driver more gearbox control without taking his hands off of the steering wheel. This drivetrain should allow the 2012 300 SRT8 to rip from 0-60 in the 4 second range with a quarter mile time well into the 12 second bracket and a top speed of 175 mph but thanks to Chrysler's fuel-saver technology, the 2012 SRT8 is expected to yield fuel economy numbers roughly 25% better than the old high performance Chrysler sedan.