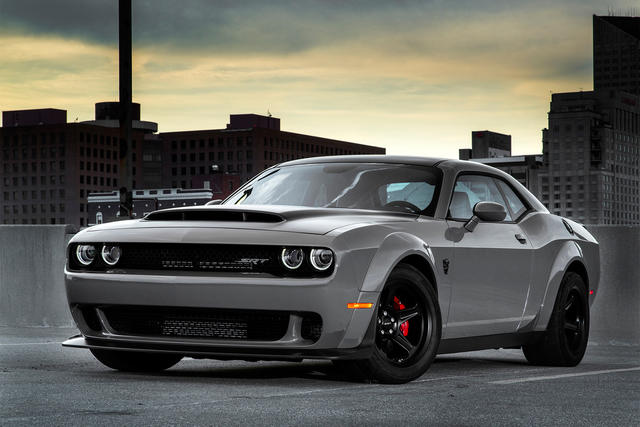 
Just when you thought Dodge couldn’t possibly one-up itself, the 2018 Challenger SRT Demon raises horsepower and performance of the Challenger—again. The Demon doesn’t just nudge the previous Hellcat’s 707-horsepower red-key rating. It also adds 101 more horses (on pump gas). Both default to a mere 500 hp with the black key.

A caveat: For the timed performances claimed in its press releases, Dodge fitted pizza-cutter front tires, drag racing slicks, ran it at 147 feet above sea level at 8:34 p.m. with a 40-degree ambient temperature on a fully prepared surface, and used 100-octane fuel to allow the 6.2-liter supercharged V-8 to make at least 840 hp and 717 lb-ft or torque. The National Hot Rod Association certified the Demon’s quarter mile at 9.650 seconds at 140.09 mph. Dodge additionally claims 1.0 second to 30 mph and 0–60 mph in 2.3 seconds. Huzzah. Whether you consider that a “production-car record” is up to you.

Seven months later, Dodge gave us nine passes to run a couple variations of the Demon down Lucas Oil Raceway’s dragstrip in Indianapolis in an effort to have us believe its claims. However, actually duplicating them will prove highly elusive to the 3,000 U.S. and 300 Canadian buyers who have already agreed to pay at least $87,790 to try.

Actually, those buyers would need to spend at least $1 more on the black wooden Demon Crate, which includes those “front-runner” drag wheels (minus tires), valve stems, a powertrain control module with the high-octane calibration to recognize 100 octane, the added virtual button to select it from the touchscreen, and a huge, conical performance air filter. The custom-serialized crate also contains a passenger-side mirror blank to cover the hole after its removal, Demon-branded tools to change the car from street to track use, and a custom foam carrier, which fits neatly in the trunk to carry the skinny wheels and tools. (It reminds us of the original 1967 Camaro Z/28, whose exhaust headers and other race-ready items were reported to be shipped in the trunk of the otherwise stock car.)

The Demon team took about 200 pounds out of the car compared to a Hellcat, so other $1 Demon options include a front passenger seat, a rear seat, and a trunk mat. There are additional heavier seating, premium audio, and appearance options that cost significantly more than a dollar.

Learning to use the car’s standard line lock to produce smoky burnouts to heat the stock Demon-spec Nitto drag radials (315/40R18) was the easy part. Learning to use the transbrake to access the car’s torque reserve proved a little more challenging. It’s a bit of a rub-your-belly-and-pat-your-head exercise: The car must be in Drag mode with the brake pedal firmly depressed with the left foot. You then need to pull and hold both shift paddles and raise the engine rpm sloooowly (to gently load the transmission), whereupon once the minimum rpm is reached, you can release one paddle then the brake (the car stays put while adjusting engine rpm with the throttle), and finally the other shift paddle. This transfers up to 2,500 pounds of weight rearward, making the horizon dip and the front tires dance over the sticky dragstrip. Hold on to your molars.

It feels very odd/disconcerting to remove pressure from the brake pedal—holding the enraged car in place with a mere shift paddle while the transmission is fully locked up feels akin to holding a bull from charging out of its pen by a single hair of its tail. The engine even sounds odd while it burbles angrily under light throttle. It’s not like a supercharged V-8 but more like a Cessna 152 idling before takeoff. But the effectiveness of the transbrake is undeniable. The high-stall-speed torque converter, the torque multiplication that occurs inside the TorqueFlight 8HP90 eight-speed transmission, and the 8.3-psi boost from the 2.7-liter (per revolution) supercharger allow for 534 lb-ft of torque available immediately at launch (at about 1,500–2,000 rpm).

Did we lift the front wheels off the ground like the photos show? Nope, but we felt the nose get plenty light in suboptimal conditions. It seems all the time is in the launch and how quickly the driver opens the throttle. Automatic upshifts are quick enough that the hood barely dips each time. The most prominent sound at the beginning is the rear tires searching for grip as the driver probes the throttle. Too much throttle too soon easily roasts the drag radials, even on the VHT and rubber surface. Too little, and the nose falls. Coordination, timing, and that seat-of-the-pants X-factor are required for a good launch. Once the Demon is fully hooked up and the throttle is wooded, the overwhelming noise is from the whining supercharger. The next startling noise comes after the finish line in the relative vacuum of silence. It’s the sound of the driver exhaling in his helmet before going for the brake pedal.

Did we run in the 9s? Again, no. Dodge wouldn’t allow the track’s timers to be turned on, but the car’s self-reported SRT performance pages told us our best quarter-mile pass was an 11-flat. Keep in mind, our car had optional leather heated/ventilated front seats, a heated/power tilt-telescoping steering wheel, and floor/trunk mats. The car’s development drivers were reportedly running 10.5s in a single-seat car in the same 88-degree heat with 65 percent humidity at 1,060 feet elevation. We weren’t being lame. It was just a hot, muggy Indiana day in July, not a cool Florida evening in December.

Bench race all you want, but pick your actual race days/locations and exercise your Demon wisely if you want to keep your pink slip. It’s quick. It’s a little tricky. But it’s not immune to weather conditions or driver skill.

I love reading the Demon. What a beast. Way to go, Dodge!
Scott Moseman
http://www.TheHEMI.com/
Follow us: