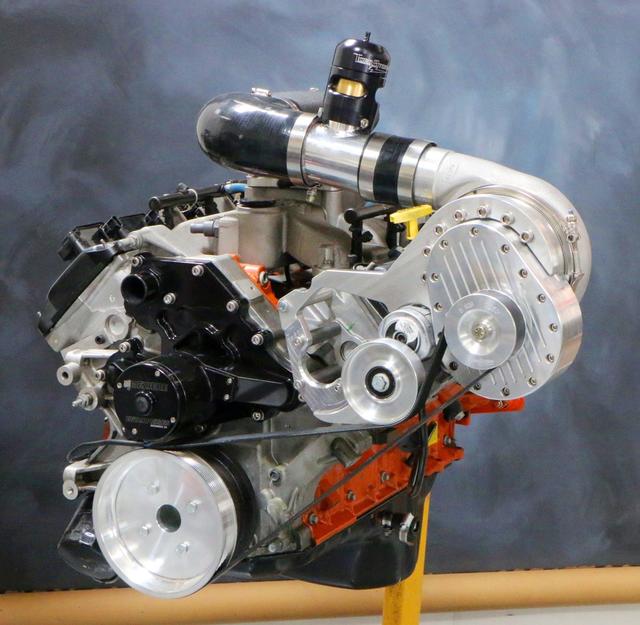 
Let’s take a look at the list of the things the Gen-III Hemi has going for it. Right off the bat, we have to give the nod to the name itself, as the word Hemi is far and away the most recognizable designation in the performance industry. More than just a name, the latest Hemi has the performance to back it up. Thanks to a combination of modern technology and cavernous cylinder heads (especially in the latest versions), the Gen III is a serious power house. In terms of outright flow, the early Hemis (like our test motor) topped all the cathedral-port offerings from GM, including the performance-oriented LS6. Later Hemis handily out-flow the rectangle-port LS3-style offerings from GM and the latest 6.4L (Apache) heads even best the much-vaunted raised-port LS7 heads. Toss in the extra displacement offered by the current 6.4L variants, to say nothing of the supercharged Hellcat and Demon versions, and it’s easy to see that Hemi performance is alive and well thanks to the Dodge dudes.

Though a stock Hemi is plenty powerful, what helps make a Hemi so popular with Hemi owners is the way it responds to performance upgrades. After all, man does not live by stock performance alone! What happens when you pull up to the light next to a supercharged Shelby or ZL-1 Camaro? As good as a stock Hemi Charger, Challenger, 300C, or Magnum is, battling with boost is a pretty tall order. Sure, a Hemi will respond to the usual modifications like ported heads and a cam, but what a Hemi owner really needs out on the mean streets is the ultimate bolt-on. Of course, we’re talking about boost baby!

To illustrate what happens when you transform an everyday Hemi into a blown bad butt, we took TorqStorm up on their offer to test one of their centrifugal supercharger kits. While TorqStorm offers Hemi kits for specific late-model Mopar applications, we installed this system on a 5.7L crate motor supplied by Mopar Performance. Positive pressure supplied by the TorqStorm supercharger will benefit any Hemi application (from 5.7L to 6.4L, and strokers too); we just happened to have this test mule sitting around begging for boost!

As indicated, the test motor was an early 5.7L, but the crate motor was no longer in as-delivered trim. Long ago, the Hemi had been upgraded with a healthy hydraulic-roller cam profile and a set of ported stock heads from Total Engine Airflow. While the factory Hemi motors relies on some type of long-runner EFI manifold, the crate motor features a short-runner single-plane intake. Though this manifold could also be run with simple carburetion, it was supplied in port-injected form with a 4150, four-hole throttle body providing the necessary airflow. In essence, the TorqStorm blower kit (MSRP $2,800 for billet aluminum finish) was configured to blow through a carburetor mounted in the traditional location, but instead of carburetion, boost was supplied to the 4150 throttle body. The easy-to-install TorqStorm kit included the centrifugal supercharger rated to support over 700 hp. Also included in the kit were the necessary mounting brackets, tensioner, and crank pulley assembly. Since the factory Hemi damper was a press fit with no keyway to stop the damper from spinning on the crank, the TorqStorm kit included the necessary pin kit to positively connect the two. Finishing touches included a carb hat, blow-off valve, and the necessary clamps, hoses, and drive belt.

Before adding boost to the 5.7L, we had to run the Hemi in normally aspirated trim to establish a baseline. This would allow us to isolate the power gains offered by the supercharger. The modified Hemi was installed on the dyno and configured with a Meziere electric water pump, 1 7/8-inch Hooker long-tube headers, and a Holley HP management system. Run in normally aspirated trim, the modified 5.7L produced 514 hp at 7,000 rpm and 423 lb-ft of torque at 5,900 rpm. The TorqStorm supercharger was then installed with the supplied 3.25-inch blower and 8.0-inch crank pulleys. This combination produced a peak of 10 psi. Dialed in with the Holley HP ECU, the supercharged Hemi produced 675 hp and 585 lb-ft of torque. This represented gains of 161 hp and 162 lb-ft of torque. We suspect there was even more power left in the combination, but it is hard to argue with a 5.7L that belts out 675 hp. Think about what this combo would be like in an A-Body Dart, B-Body Charger, or E-Body Challenger! Remember, TorqStorm offers a full line of kits for popular Mopar applications, including small- and big-blocks, late Hemis, and even dedicated kits for Ram trucks, Durangos, and Dakotas. I guess boost really is the ultimate bolt on!

Indeed, I think my Ram could use an injection of 160-hp.