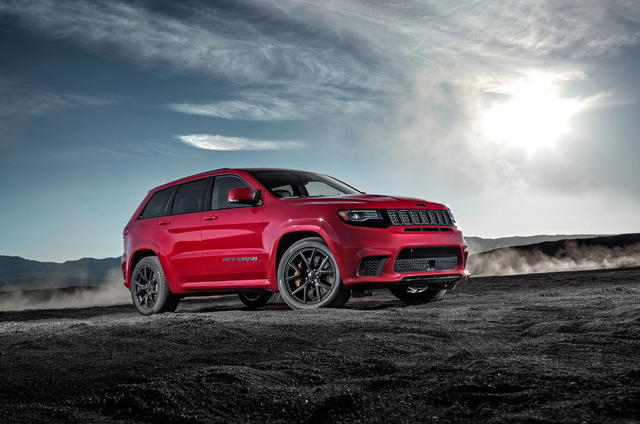 
There’s a line from Moby-Dick, “In a whaler wonders soon wane.” Cetaceans are awesome creatures, magnificent mammalian consequences of evolution. Awesome, in the older, proper sense of the word. And in a life spent in their pursuit, so filled was it with wonder, the whaler soon grew immune to unsubduable excitement. As much as I try and not let myself get numb to the routine of driving fantastic dream machinery, it happens.

So imagine my surprise when, leaving Motor Trend HQ one afternoon, I floored the Jeep Grand Cherokee Trackhawk and found myself laughing like a fool for 30 seconds straight. Mind you, I only floored the big, red Jeep for about three seconds, but that was enough to make me giggle and guffaw for 10 times as long. I wasn’t in Sport mode or Track mode, and I wasn’t using launch control.

As Jimi Hendrix would term it, I am experienced. Experienced with both powerful and crazy. The AMG 6×6 jumps to mind, as does the Lamborghini Urus, the Lamborghini LM002, the BMW X6 M, and even a good old Unimog. I’ve also driven a number of cars with 700-plus horsepower; heck, I had a Dodge Charger Hellcat for a year. Until recently, however, I’d never driven an SUV with 700-plus horsepower.

Well, live long enough, and you’ll see everything. Including the new Jeep Grand Cherokee Trackhawk, the family SUV with a 707-horsepower 6.2-liter supercharged V-8 under the hood. Crazy? By design. It’s refreshing, both personally and professionally, to get whomped over the head by something as utterly ridiculous as the Trackhawk. But is it any good?

I had been in the Trackhawk’s driver’s seat for maybe a minute and just buried my right foot. To brag a little, I’ve hit 171 mph on the front straight of Big Willow in a Porsche 918 and hit 193 mph on the Bonneville salt in an AMG GT S. I’m used to big machines doing big things. But none of them tickled my funny bone like this $100,960 Jeep. I haven’t laughed about a car like that since … I don’t remember.

What’s it feel like? Well, some of the giggles come from how it launches the opposite of a Hellcat. Perhaps not what you’d expect because the two vehicles sport the same engines, same power, and nearly the same torque (645 versus 650 lb-ft). The thing is, although the Hellcat is both a Pirelli shareholder’s best friend and a smoke machine, the Trackhawk—by virtue of all-wheel drive—puts all that screaming supercharged fury down to the pavement. The big Jeep also lurches back on its haunches in a fun but startling way. For a brief moment, it feels as if the Trackhawk’s beak is pointed at the sun. The adaptive Bilsteins are actually fairly stiff (and would be stiffer still if I’d been in Track mode), but with 70 percent of the power hitting the rear wheels, thanks to a fixed torque split, this Jeep is going to lean back when launching.

How does this thing handle? Another reminiscence if I may. Since I’ve driven the Porsche 918, I inevitably get asked how it is to drive. “Fast,” I say. “It’s just fast.” Meaning, I know that I drove four laps around the big track at Willow Springs, but I literally remember nothing about the 889-hp hybrid hypercar, save for how fast it is. Nada. Same is true for the Trackhawk, only in terms of initial acceleration. I know I took some corners in it, but the bulk of my memory comes from that first launch. It’s just so brutally quick that I know I drove the Jeep aggressively on a curvy road, but I just can’t get past the fury of leaving from a dead stop. Speaking of which …

The Trackhawk hit 60 mph in 3.3 seconds in our testing, beating Jeep’s claimed time of 3.5 seconds. The quickest we’ve ever hit 60 mph in Hellcat testing is 3.7 seconds, for both the Challenger and the Charger (both were eight-speed autos—we’ve never tested a manual). For SUVs, the quickest to 60 mph we tested before the Trackhawk were Tesla Model X (3.2 seconds), the Bentley Bentayga (3.5 seconds), the BMW X6 M (3.7 seconds) and the Mercedes-AMG GLE 63 S Coupe 4Matic (3.9). Lamborghini is claiming 3.7 seconds to 60 mph for the 650-hp Urus, though I think we’ll see 3.4. Discounting the instant-on torque of the Tesla, so far, so good for the Trackhawk.

But right now is as good a time as any to mention one little caveat: We weighed the Trackhawk, and the results aren’t pretty—5,448 pounds. That’s a lot of SUV. That AMG, for instance—which coincidently shares the same underpinnings as the Trackhawk, the last remnants of DaimlerChrysler—weighs nearly 100 pounds less (5,359 pounds). The X6 M comes in at a relatively trim 5,187 pounds. All of which makes the Trackhawk’s acceleration that much more crazy.

To continue that conversation, in the quarter-mile test, the Trackhawk runs 11.7 seconds at 116.2 mph. Did you ever think we’d see the day when a production SUV runs the quarter in the 11s? That’s just crazy! Or should I say ludicrous, as the Model X when in Ludicrous mode also runs an 11.7-second quarter mile. However, the Trackhawk’s trap speed is 0.2 mph higher than the Model X’s, so Jeep beats Tesla in a drag race. What a world. Speaking of 11s, the 600-horsepower Bentayga runs 11.9 seconds at 117.1 mph. Some other fast SUVs for you to consider: the X6 M, but that slowpoke took 12.1 seconds at 114.3 mph. The quickest we’ve ever seen a four-door Hellcat run is 11.8 seconds at 124.3 mph. Meaning the Jeep is quicker, but the extra 900 pounds of lard and AWD hardware slows it down in terms of velocity, hence the 8-mph gap at the end of 1,320 feet. The quickest two-door Hellcat ties the Trackhawk at 11.7 seconds, but its trap is higher still at 125.4 mph. The Challenger Hellcat just happens to weigh 999 pounds less than the Trackhawk. (That’s 666 if you invert—coincidence or conspiracy?) Just to further impress upon you how quick this Jeep is, the Corvette Grand Sport hits 60 mph in 3.9 seconds and runs the quarter mile in 12.2 at 116.1 mph. Moreover, the 650-hp Camaro ZL1 with the 10-speed auto hits 60 mph in 3.5 seconds and runs the quarter mile in 11.5 seconds at 125.0. This Jeep is straight-line legit.

The Trackhawk is the Grand Cherokee in Ludicrous Mode! Insane!
Scott Moseman
http://www.TheHEMI.com/
Follow us: