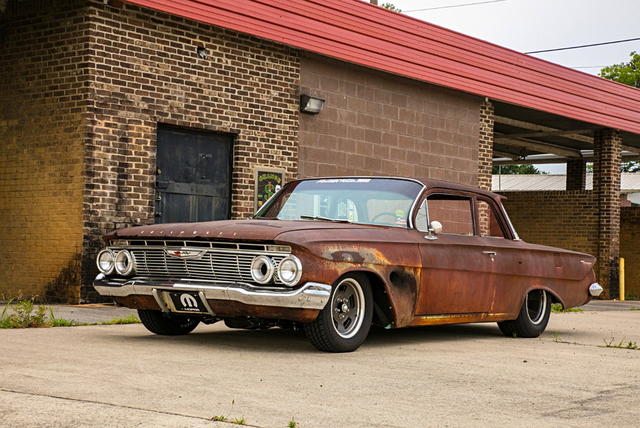 Drool on this HEMI Swapped 1961 Biscayne with a Pair of 70mm Turbos from the Alabama leg of #HRPT18
http://www.hotrod.com/articles/drool-he ... eg-hrpt18/


Been to The Street Machinery Sales and Service Sunday Swap-A-Rama group on Facebook yet? It’s full of cars with wear, trucks, and some high-end stuff for the purposes of drooling and killing your 401K. It was started by Boris Maryanovsky to locate and buy whips to build at Street Machinery and Sales, his shop in Euclid, Ohio.

Because of the group, Boris managed to spread the word of the Power Tour, a trip he’s taken on multiple occasions since 1995. He brought a huge crew of first timers this year who have at some point had all, or part of a car built at his shop.

His 1961 Biscayne was a 45-day build just for this week of on-the-road abuse. The current combination is a 6.1L Hemi with pair of 70mm turbos from On3Performance and a T56, six-speed. The trick to the look is rust, and the 18×8 and 20×10 Billet Specialty Turbines tucked under the fenders. The interior was stitched by Ciadella Company, but the rest of the car is all Boris. If you want to see the car, look for the line of wagons and Impalas on the Tour, you still have a few days left.

That's how you build a Chevy!