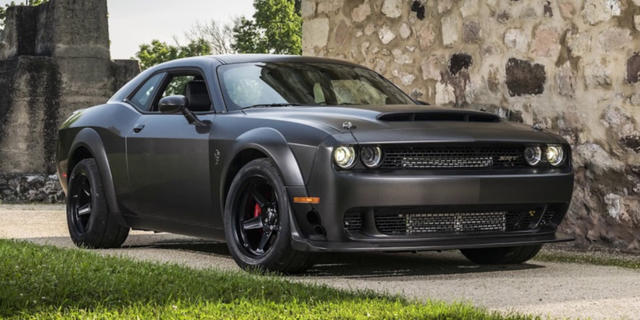 
The Dodge Challenger SRT Demon is incredibly quick. From the factory, it can put up sub-10 second quarter-mile times, making it quicker than anything else you can buy new with a license plate. The folks at Speedkore weren't satisfied, though, so they set out to make the Demon even quicker. It looks like they've succeeded.

Speedkore has unveiled one of its cars that will debut at this year's SEMA show: A Dodge Demon that's had all its body panels replicated in carbon fiber, and its supercharger replaced with two 6875 Precision Billet ball-bearing T4 turbochargers. It now makes nearly 1400 horsepower at the flywheel, translating to 1203 horsepower at the rear wheels. The car looks largely stock from the outside, save for the carbon fiber texture, hood pins, and side-mounted exhausts on either side of the front bumper. Thanks to the weight savings and massive power increase, it's able to put down an 8.77-second quarter-mile time at 162 mph—nearly a second quicker than the Demon's stock 9.65-second time. Oh, and it also sounds fantastic.

This isn't the first time we've seen Speedkore replace a muscle car's body with carbon fiber. Back in July of 2017, the company unveiled an all-carbon bodied Ford Mustang Shelby GT350R with a weight savings of over 400 pounds. Of course, it wasn't cheap—the conversion itself cost $64,000 in addition to the price of the car. Then, at SEMA later that year, Speedkore debuted its first all-carbon Challenger SRT Demon—though that car retained its stock 840-horsepower supercharged setup. Speedkore hasn't said how much weight the carbon-bodied Demon saves over the stocker, but we imagine it has to be more than the weight savings on the Mustang.

Speedkore uploaded a video on its YouTube channel detailing the build, including how it replaced the body with carbon panels, and how it mounted those massive turbos to the engine. It'll be on display at SEMA in Las Vegas October 30th to November 2nd.

Do people really like the black look of carbon fiber, or is it just hard to paint? 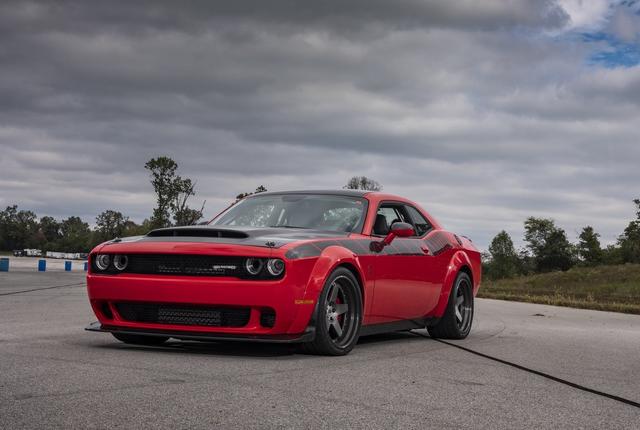