The Mopar brand is stampeding into the 2018 Specialty Equipment Market Association (SEMA) Show with a brand-new HEMI-engine-powered beast: the "Hellephant" 426 Supercharged Mopar Crate HEMI engine, which turns the crank at a mammoth 1,000 horsepower and 950 lb.-ft. of torque.

The "Hellephant" engine hits the magical 1,000 horsepower mark via bulked-up displacement, with 4.0 inches of stroke and bore specs at 4.125 inches. An improved supercharger with a high-efficiency rotor is mounted on the all-aluminum block, which provides huge weight savings to keep the "Hellephant" light. The all-aluminum block, used in Mopar Dodge Challenger Drag Pak race vehicles that dominated the 2018 NHRA Factory Stock Showdown class, was configured for the street in close collaboration with Mopar and engineers from the motorsports world.

Christmas is coming, let me know if you need my shipping address. 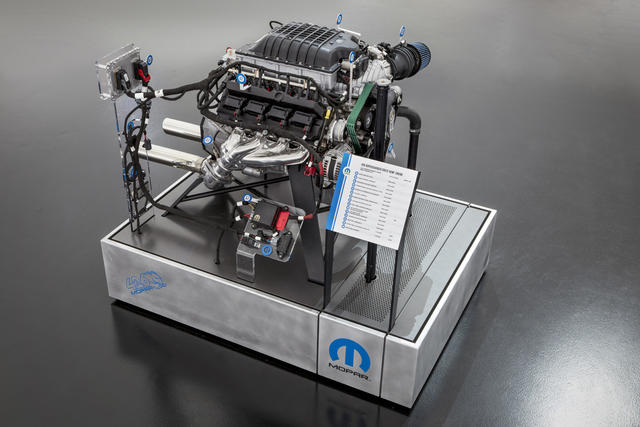 
On the eve of Halloween at this year’s SEMA Show, Mopar unleashed the demonic, mother lode of all crate engines that will scare the living hell out their Motor City rivals. Aptly dubbed “Hellephant”, the new Mopar supercharged GEN III 426 cubic-inch HEMI monster will knock down 1,000 horsepower and 950 lb.-ft. of goliath stomping torque on 93-octane pump gas and for the Pentastar faithful, this crate motor checks all the right boxes. From its legendary cubic-inch displacement, all-new aluminum block, massive supercharger, and plug ‘n play electronics, many customers will be lining up to plunk down their cold hard cash to install this modern-world crate HEMI between the fenders of a ’68 Dodge Charger or ’71 Plymouth ‘Cuda.

To create an engine of this magnitude, Mopar knew they’d have to start with new block, forged internals, and other non-assembly line components. The 1,000 horsepower number was the bogey Mopar’s engineers were shooting for, not just for bragging rights, but to fire a missile within the growing late-model HEMI aftermarket business that the gains more traction year after year. Besides, Mopar’s “Hellephant” is the first 1,000-horsepower crate engine kit offered by an OEM.

The man in charge of making the 1,000 horsepower Hellephant a reality is the head of Mopar Accessory and Performance Parts Portfolio, Todd Beddick. He can also claim the Mopar 392 HEMI and 6.2L Hellcat HEMI crate engines that were created under his watch, and many of the lessons he and the engineers learned were applied in developing this 1,000 horsepower behemoth.

“With the Mopar 345, 392 and “Hellcrate” 6.2 Supercharged Crate Engines and Crate HEMI Engine Kits, we were starting with production engines and production calibrations. With the Hellephant 426 Supercharged Mopar Crate HEMI Engine, we began from a much different starting point. We have been working on block development through our motorsports program, which served as the foundation for this project. The calibration started with a 6.2 supercharged base but required significant modification for this application,” said Beddick.

For Beddick and his merry band of Mopar maniacs, the “Hellephant” project didn’t happen overnight or on a whim. A lot of planning went into raising the bar for crate engines by offering insane horsepower on pump gas that’s perfectly streetable. That’s a daunting task, even for an OEM.

“It began about four years ago when we mapped the plan for the Mopar Crate HEMI engine family. A key for us was to bring an OEM “plug-and-play” solution to market for Gen III EFI HEMI engines. We started with the production-based engines, which we launched in 2016 and 2017, but the plan didn’t stop there. The next step was to mate the supercharger technology we were working on as a corporation with a 426 cubic-inch displacement engine to unleash another level of power output. Over time, that evolved into a horsepower target with four digits”, explained Beddick.

The first order of business was developing a lightweight but strong foundation to handle 1,000 horsepower and almost equal amount of torque without splitting its guts. That’s where the Mopar and SRT motorsports engineers collaborated on an aluminum block, similar to one used in Leah Pritchett’s 1300 horsepower Challenger Drag Pak that just won the NHRA Factory Stock Showdown.

“One of the biggest challenges was the aluminum block. Aluminum blocks have been part of the Mopar portfolio before, but they were not designed for this level of power output, so we needed something more robust. That’s where we looked to the expertise of our SRT Motorsports colleagues and developed a block that could handle the stresses of 1,000-plus horsepower applications,” commented Beddick.

Here’s where racing the supercharged HEMI Challenger Drag Paks relentlessly with their aluminum blocks for 12-16 months came in handy. Mopar and SRT engineers applied what they had learned regarding the type of stress the new 426 Crate HEMI would need to endure and made some slight revisions.

“The ribbing in the lifter valley of the block was added, along with additional material at the base of the bores and through the bulkheads. The casting process is also greatly improved to manage core shift,” said Ed Hessell, one of the Mopar engineers assigned to the “Hellephant” project.

During testing, the Mopar engineers ran the 426 Crate HEMI relentlessly on the dyno with pull after pull. When the magic 1000-horsepower number popped up on the dyno’s graph, Mopar had long-tube headers bolted on the engine. Don’t worry, though, their engineers did the final calibration on prototype 2-inch SRT manifolds and used those in the mule vehicle when running drivability studies.

Next was to find a supercharger that could deliver the boost levels needed to achieve the mammoth 1,000 horsepower number while meeting the stringent durability testing Mopar and SRT use on production engines. Rather go outside, Mopar tapped into OEM supercharger supplier, IHI. These are same folks whose blowers sit on top the 6.2-liter HEMI Demons, Redeyes, and Hellcats. Since this was a proven piece, the production powertrain engineers and Mopar bumped the blower’s displacement to 3.0-liters and a high-efficiency rotor was used to combat the additional heat.

For comparison, the 2018 Challenger Demon and 2019 Challenger Redeye uses a 2.7-liter blower and the Hellcat (and Mopar Hellcrate) has 2.4-liter unit. By comparison, the 426 “Hellephant” crate engine’s 3.0- liter supercharger is moving a lot more air than its fellow blown siblings. With recorded boost levels of 10-11 psi on stock 6.2-liter, 707 horse Hellcat HEMI power plants, and 14.5 psi on Demon and Redeye engines with the stock 797-808 horsepower pump gas tune, we imagine “Hellephant’s” boost levels are north of 15 psi to achieve the 1,000 horsepower rating.

Moving the valves is a custom-ground hydraulic roller camshaft from Comp Cams that uses Demon cam cores. Mopar was tight lipped on the actual lift and duration specs but we’ll get more details from them prior to the first batch of “Hellephant” 426 Crate HEMI Engines being built early next year.

When it came to the bottom end and the rotating assembly is where Mopar enlisted the help of the aftermarket. Even though the tire shredding 840 horsepower Demon uses a forged crankshaft, powered forged connecting rods, and forged pistons, those pieces had to be swapped out for a rotating assembly that had a bit more strength and offered increased displacement for the “Hellephant’s” 426 cubes vs. the Demons 376. The 426 has a 104.7mm bore and 101.6mm stroke compared to the Demon/Hellcat’s 103.9mm bore and 90.9mm stroke. The “Hellephant” 426 supercharged HEMI crate engine will have all forged internals including special H-Beam connecting rods, and unique pistons that bring the compression ratio around 9.5:1.

Other goodies include such plug-and-play parts such as the powertrain control module (PCM), power distribution center, engine wiring harness, chassis harness, accelerator pedal, ground jumper, oxygen sensors, charge air temperature sensors, fuel pump control module and cam bus interface device. Enthusiasts will be pleased to note that the Mopar PCM is unlocked and tuned to pump out the 1000 horsepower, and we’re sure there’s a back door for additional calibration capabilities. Mopar may have designed the kit for installation into pre-1976 street and off-road vehicles, but you know someone with a tired and worn out ten-year-old Challenger or Charger SRT8 will drop in the new 426 supercharged HEMI crate engine.

It may seem like a daunting task but remember, the GEN III HEMI has been around for 15 years or so, and there’s a whole network of suppliers making everything from motor mounts to headers for installing the modern HEMI into vintage cars. Late-model guys have also figured out how to install the current Hellcat engines into RAM trucks and even Jeep Wranglers so the code for electronics interface has been cracked. Regardless, Mopar has done their homework and will provide in-depth information/installation instructions so driveway mechanics or professional installers should have no issues dropping this killer engine into their rides.

Speaking of what platform to showcase Mopar’s monstrous 1000 horse 426 HEMI Crate Engine into, the guys in the FCA Product Design Office styling studios have created a 1968 Dodge Charger of epic proportions and have aptly named it “Super Charger.” Painted in what the Mopar calls “De Grigio” Grey Metallic, the Super Charger pays homage to the 50th anniversary of the GEN II Charger body style that jumped city streets and was the car of choice among pop-cultures most evil characters. Look for a full-blown feature on Mopar’s Super Charger in an upcoming issue of HOT ROD.

Some great background on the new 1000-hp 426 HEMI from HOT ROD.
Scott Moseman
http://www.TheHEMI.com/
Follow us: