2008 Jeep GC is the Sleeper Surprise of a Lifetime

2008 Jeep GC is the Sleeper Surprise of a Lifetime 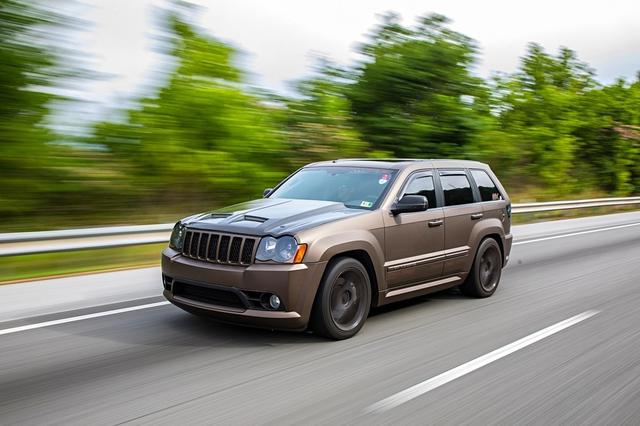 
Something big was coming up the road behind us. It sounded like it, anyway. Expecting a musclecar, we kept looking around the truck that was blocking our view. Then it started doing four-wheel burnouts, drifting to the left and right in the rear view mirror, sounding like a giant slide whistle. It had our attention, forcing us to note the carbon-fiber hood and the fact that it was a Jeep Grand Cherokee, a vehicle that makes good power stock, but not like this.

For this build, Weber stripped the 6.1L Hemi out of a 2008 Jeep SRT-8 and swapped in a 6.4L crate engine featuring drop-in forged rods and pistons to handle boost from the 2.9L Whipple supercharger. The cam was swapped for a Comp Cams grind with 0.238/0.248 degrees of duration at 0.050 with 0.610-inch lift and the VVT locked out. The stock ECU was tweaked by HP Tuners.

The supercharger has a unique eight-rib belt drive system with a Hellcat overdrive damper. The Green belt from Gates is the brute version of the standard black six-rib for more tension and less of a tendency to get left on the ground.

Weber backed all of this up a beefed Pro Series transmission from Paramount. The input shaft is unbreakable, the transfer case has clutch pack mods, and the driveshaft is made from carbon fiber. The factory diff was swapped for a Strange S-Track Dana 60.

“A build like this would take six months to get all the driveline and 8-rib drive system in place, plus engine and transmission testing,” says Weber. You can do this to the 2007-2010 6.1L powered WK1 SRT-8. The 2012 (there was no SRT in 2011 for Jeep) and later already had the 6.4L you can do the same stuff until 2014 where the 8-speed and independent rear appeared. For that there is a 9-inch conversion.

Outside, the wrap is Bronze Satin from 3M. All of the trim is wrapped in carbon fiber with factory powder-coated wheels and Nitto street tires. It’s everything you need for sneaking up on that Ferrari or Corvette on the freeway.

So many awesome Jeep Grand Cherokee builds these days!