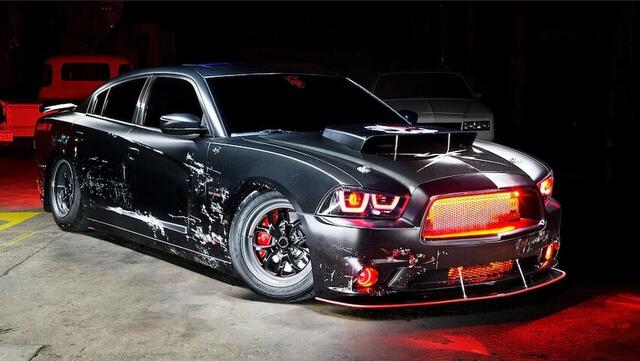 
The exuberance of youth and automobiles don't always go together well. Cars are at times the catalyst for unwanted problems. For Alex Liebergall a 2010 Camaro was just that, and it wasn't even a V-8. His sporty GM ride was begrudgingly sent to a new home and substituted with a Dodge Ram pickup. That was his first flirtation with a Mopar, but the draw of a sportier ride lingered. That lead to the purchase of a 2011 Dodge Charger R/T. "I wanted a Challenger originally," he explains. "At the time I was taking care of my parents and grandparents, so I needed something with four doors. I liked the mix of the Charger with some of its retro design elements like the taillights, and the idea of a big car with a big motor in it."

That big motor came in the form of a 5.7 Hemi. Rated at 370 horses, it was another potential problem magnet. "The reason I bought the Charger instead of something like a Honda Accord was because I wanted to get more into racing," he says. The Charger was daily transportation for him, but the racing side of the equation and the desire to get a little more juice from under the hood opened up the world of online forums and the flow of information he was after.

Armed with some of that newfound info, he installed some of the usual over-the-counter mods such as a cold air intake, shorty headers, and an exhaust system. That led to several trips to Englishtown and Acto, New Jersey, to do a few passes down the track with the slightly modded car. "I had a lot of fun with it and knew that I wanted go faster and do it more often," he says.

Subsequent trips to Cecil County dragstrip in 2013 exposed him to some higher-horse cars and many of the people that he was chatting with online. "I saw the 8- and 10-second cars, and I wanted to be able to compete with those people," he says. The advent of the aftermarket cracking Chrysler's ECU opened another door for him in taking the car to the next level with a cam swap, a set of ported and polished heads, revised suspension, and a custom tune. That gave him substantial gains at the track with the Charger dipping into the 12s on street rubber.

He started writing the next chapter when he went to a local car show on a whim. "I hung out for the day and had a good time, won a trophy, and thought I could really get into this," he recalls. Perhaps the most enjoyable aspect was that he was surrounded by people who shared the same passion for cars. That aside, he points out, "I am a pretty competitive guy, and there is nothing wrong with getting a top 20 at a car show, but I wanted to be the guy that was in the best of any category. That's always been my goal professionally and personally." At that point he decided that upping his game at shows was the compromise left by the racing void, but one thing was clear—a solid black car wasn't going to move the needle in the direction he wanted.

That's when the seed was planted to create a themed car. That led him to think about some of the famous Chargers out there. As an avid fan of Quentin Tarantino and his body of work, the movie Death Proof stood out as the point of inspiration for moving forward. That direction took its first baby steps with the application of a logo on the hood and a custom stripe. With his dive into the world of Instagram, he realized that there were numerous cars out there with a unique look that had been achieved with a full body wrap.

After reviewing the movie, he decided to contact Skepple Wraps, the company that was responsible for many of the wraps that he viewed online. "I told them to run with it," he says. "I gave them the general theme of what I wanted—right down to the damage on the body." From there they developed the artwork that he would use on the car.

Visually he was set, but the racing bug was still strong. As a present to himself, after completing law school, he had a Procharger supercharger installed. Running at 7 psi, the addition of the blower bumped the power on the Charger to 605 horses at the rear wheels. He also had the idea to do a rear seat delete, which offered him another opportunity to add a custom touch by bringing the movie theme inside. For that he had Mike's Air Brushing in Philadelphia, Pennsylvania, create a mural on sheet vinyl that was then wrapped over a wood underlayment. This was then taken one step further two years later with another mural under the hood.

As the car morphed into its new role, he added custom-painted Weld Racing wheels at all four corners wrapped in some Mickey Thompson and M&H Racemaster skins. That rolling stock complemented the visual aesthetics but didn't do much for the ride height. The idea to have the car on an Air Ride suspension was also on his radar, and it served a two-fold purpose. At shows he could drop it for a more aggressive look then raise it up for a more comfortable ride and better handling. He says that the air suspension solved that problem.

As his presence at shows grew, so did the desire to keep pushing the envelope. He knew that adding lighting to the car would be another custom element. For that he had Lighting Trendz in Fairfield, New Jersey, create a one-off light package that included a set of custom headlights with the Death Proof emblem.

Alex points out that none of this would have been possible without the support of his wife, Lisa Grace, and Joe Dutkiewicz at JD's Auto Repair & Performance.

This is definitely a unique Dodge Charger! 605-rwhp back up the image, too.