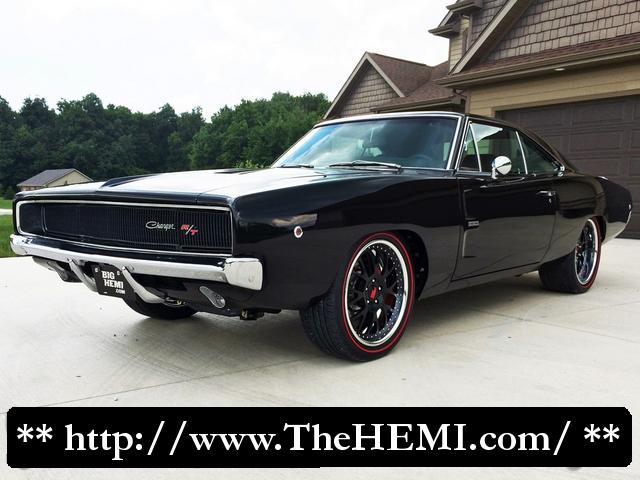 
Is the 1968 Dodge Charger the best-looking muscle car of all time? Take a good, long look at this stunning pro-touring Charger and tell me your mouth isn't watering and your knees aren't getting weak. It's sinister, it's gorgeous, it's fast, it's nasty, and that was all before the guys at the Big Hemi garage started working on it. With a mountain of Hilborn-injected Hemi under the hood, black paint that you can swim in, and a suspension that rips up chunks of concrete from the road, this might be the finest modified Charger ever built. There's over $200,000 tied up in the construction of this incredible car, so you know it isn't cheap, but if you're wearing your big boy pants and carrying your liquid-cooled credit card, there aren't many other cars that can match it on the show field or on the street.

Jason Bair and the Bair Customs shop have built a reputation on not only engineering fast cars, but incredible attention to detail. The hardware flat-out works, no question about that: the A/C is cold, the big Hemi idles nicely and happily guzzles pump gas, and you can hammer it for hours and still climb out feeling refreshed. But what sets a Bair build apart is the little stuff that often goes unnoticed until you know what you're looking for: the plumbing is hidden, the bolts are all stainless (and note how all the visible heads are aligned with one another), and the bodywork is concours-grade. We don't use words like "perfect" or "flawless" around our shop because no car is perfect, but the stuff coming out of Bair Customs gets awfully damned close.

This car started out as a garden-variety Charger, complete with "Dukes of Hazzard" style wheels and a Dixie horn. It was running but tired, perfect for this kind of rejuvenation. As the build photos show (drop us a line, we have dozens to show you), it was stripped to a bare shell and rebuilt from there. Sub-standard sheetmetal was rejected and replaced with fresh stuff and installed so seamlessly that you'll never see where the cuts were. On the rotisserie, even the floors were sanded, filled, and smoothed to act as the perfect background for some pretty serious hardware (we'll get to that stuff in a moment, don't worry). Once the sheetmetal was in order, every single square inch of it, inside and out, was covered in Sherwin-Williams "Back in Black" two-stage urethane: three coats of color, three coats of clear, then a full color sand, then three more coats of clear, another color sand, then a professional buff job. The result is a surface that reflects like a mirror and is so black that it makes other high-end black cars look dusty when they're parked next to it. If you think you've seen black, you'd better guess again, because this car is unworldly. We also took a lot of photos of the gaps on this car, because they're precise and even everywhere you look—there's not a single area where "good enough" was good enough.

Of course, paint is just the beginning. The choice was made early on in the project to let the Charger shape speak for itself, so it didn't get any body modifications, no wings or spoilers, and not even a pinstripe to highlight the dramatic curve of the bodywork. Instead, all the factory trim was restored or replaced, then reinstalled right where it belonged and all the glass is new. From the hidden H4 conversion headlights (which now use electric motors instead of vacuum) to the cool round side marker lights to the absolutely gorgeous afterburner-style LED taillights, this car is what the original designers envisioned when they first imagined the car back in the '60s. There's a discreet HEMI badge right where it belongs, correct R/T emblems, and even Charger script out back, and if it weren't for the giant Boze wheels, well, this car could probably sneak onto a concours field and surprise a lot of judges.

The interior takes only a few liberties with the original design, but I promise you'll love the results. The biggest modification are those gorgeous bucket seats, which have aggressive bolsters that are probably mandatory in a car with this one's capabilities, but they also offer red stitching that is so subtle that you almost miss it, but it works perfectly with the black bodywork and redline tires. Clearly there's an artist at work here. Standard black carpets, new door panels, and a freshly upholstered back seat are pretty much the way the factory intended, and even the dashboard is OEM-spec. The factory gauges were rebuilt and given slick silver faces, with the only aftermarket piece being the column-mounted tach/shift light. A custom steering wheel and carbon-fiber pistol grip shifter feel right in your hands without being distracting. This is a factory A/C car, so the all-new Classic Auto Air HVAC system was integrated with the factory sliders and vents, and the system works well enough to chill the black interior down to meat locker levels. A powerful AM/FM/CD/iPod stereo system works in conjunction with about an acre of hush mat to create a pretty impressive sound stage for a '60s car, and all the speakers have been cleverly hidden throughout the interior to keep it looking stock. The trunk is fully upholstered in black carpets with a custom enclosure for the battery.

OK, OK, here's the lowdown on the hardware. The engine is a 528 cubic inch HEMI with Indy heads built by Muscle Motors, the HEMI experts. Yes, that's right, 102 extra cubic inches were crammed into the already impressive HEMI V8. But as impressive as that sounds, it only gets better with the stunning Hilborn fuel injection system up top, complete with eight individual velocity stacks and managed by a Holley brain, so it starts quickly, idles evenly, and pulls like the hand of God just gave it a quick punch. With close to 700 horsepower on tap, you know performance is, shall we say, entertaining.

All of the plumbing is race-grade and wherever possible, it was hidden out of sight behind the inner fenders (which were also filled, wet sanded, and buffed). Real AN fittings and premium braided nylon feed the system from a custom stainless steel gas tank with an Aeromotive pump inside, and an MSD 6AL box, Blaster coil, and billet distributor light the fires. There's a giant aluminum radiator from Mark 7 up front that's big enough to cool a Kenworth, so no worries about the big Hemi getting hot under the collar, even idling in traffic with the A/C cranking. And speaking of A/C, the serpentine belt system is from March Performance and includes a 105 amp Powermaster alternator, Sanden SD-7 A/C compressor, Mopar Performance aluminum water pump, and a trick power steering pump with more braided stainless fittings. Like I said, nothing is merely adequate on this car.

Ceramic-coated long-tube headers that surely qualify as works of art handle the fumes, dumping them into a custom-fabricated 3-inch TTI exhaust system with X-pipe and Flowmasters and terminating in correct tips just under the rear bumper. It looks stock but sounds like a giant can of Whoop-butt being opened. A Keisler/Tremec 5-speed manual transmission channels the torque aft and with a deep overdrive 5th gear, it keeps the HEMI loafing along at highway speeds, even with the 3.73 gears in the Dana 60 rear end. A full coil-over Alter-K-tion front suspension from Reilly Racing includes a tubular K-member, custom A-arms, and a fat sway bar to make this Charger dig in instead of rolling over. Out back, there's a Reilly Street Lynx setup with trailing arms and adjustable coil-overs that are a vast improvement over the stock leaf springs. Giant Wilwood discs live at all four corners with six-piston calipers grabbing each of the cross-drilled and slotted rotors. Controlled by a Hydro-Boost power assist and a billet master cylinder, there's enough braking power here to detach your retinas. Trick 2-piece Boze wheels were given a blackout treatment as well, and measure 19x8 up front and 20x10 in back and carry slick redline radials from Diamondback.

Given an unlimited budget, I wonder if anyone could build a nicer Charger than this. It neatly improves every single aspect of the original, but keeps all the critical things that make these cars so special. Respect is what makes this car remarkable, and respect is what it demands, both from the driver and from anyone unfortunate enough to try to give it a run on the street. It's brutal, but it's also exquisitely detailed with a no-compromises philosophy that shows in every single aspect of the build. It's also expensive, but the only way to possibly do it better is to give Bair Customs a blank check and challenge them to top it…