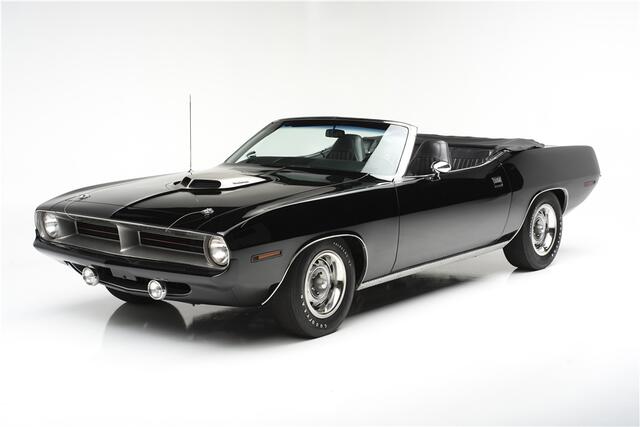 TRIPLE-BLACK MAGIC: A HEMI ’Cuda “barn find” that is truly out of this world
https://www.barrett-jackson.com/Media/H ... cottsdale/


The 1970 HEMI ’Cuda could be considered the ultimate muscle car from the classic era. It arrived on the scene with everything. Its fresh, smooth body lines cut the perfect profile for charging into a new decade. The HEMI power option broke new ground in terms of performance and threw down the gauntlet in the ongoing “horsepower wars” between the major auto manufacturers of the day. And at the same time, the HEMI pony car would solidify the Mopar brand as an industry leader.

The look of the 1970 ’Cuda exhibited some of the most memorable designer pen strokes ever put on paper. From any angle, the car had its best foot forward. And the look was much more contemporary than any of its counterparts from that same year. Even though some ’71 HEMI models might command higher prices due to their even lower production numbers, the first 1970 ’Cuda, with its unpretentious and natural style, will always be the brightest star of this universe.

Plymouth’s all-new E-body had virtually no structural similarities to any previous Barracuda, except a wheelbase of 108 inches. Even though only a few HEMI ’Cudas were produced, the road was still paved with good intentions for the HEMI option because the new car was expressly designed to accept it. The result is the ultimate muscle car showcasing the ultimate muscle car engine. And just to make sure everyone around knew the score, the slickest-looking hood scoop imaginable ‒ painted Argent Silver – rises gracefully from the center of the otherwise flat hood.

You sat low in the 1970 ’Cuda, much like today’s Camaro, but without the perceived visual restrictions of the Chevy. The ’Cuda’s rear flanks and flow of body lines around the back of the car and trunk create beautiful proportions and should be taught in every art school the world over.

The HEMI ’Cuda (Lot #1392) headed for the 2017 Scottsdale Auction was purchased new in Marrietta, GA, and came equipped with the famous TorqueFlite transmission. It was originally driven on the streets in that area until being repossessed by the bank. Keep in mind the 3-speed TorqueFlite was always an advantage back then. Good gearing and Chrysler’s renowned transmission made Mopars hard to beat, from zero to any speed you care to mention.

Perhaps no other cars on earth generate that sinister look of triple-black convertibles, especially when they have the required power to back up that image. They also look great when that top is up, which is not necessarily the case for convertibles painted other colors.

The Bowers brothers obtained this rare creature next and would eventually set it up purely for drag racing with the help of Barnett Automotive, also located in Georgia. The ’Cuda would go on to win the Super Stock Eliminator title at the U.S. Nationals.

Well-known drag racer Steve Bagwell bought the HEMI, and, with Terry Earwood, campaigned this car at NHRA and IHRA events, where it set national records for elapsed time and speed. They won 27 races with this HEMI ’Cuda in 1973 alone.

Shortly thereafter, Bagwell sold this black beauty, and then it vanished from sight for several years as if by magic. It would eventually become the ultimate barn-find once it reappeared in New Mexico during the ’80s. Its new owner, a Phoenix attorney, restored the car over time, and this prize has been lounging and looking beautiful ever since. The present owner has personally cared for this machine during the last 15 years.

If the HEMI ’Cuda is truly the ultimate classic muscle car, then this triple-black convertible with that bright orange, dual-quad elephant under the hood is the most sinister ‒ and at the same time, the most intriguing ‒ example of a HEMI ’Cuda anywhere to be found.

Even though original HEMI ’Cudas were already rare ‒ only about 700 were sold by Plymouth in 1970 and ’71 ‒ HEMI convertibles were only a fraction of that total. Add this car’s triple-black color scheme to the rarity equation, and it becomes just one of 14 produced. A detailed and successful racing history makes this particular HEMI ’Cuda strictly out of this world. Triple Black Magic indeed.

I know Christmas is over, but I will accept belated gifts.