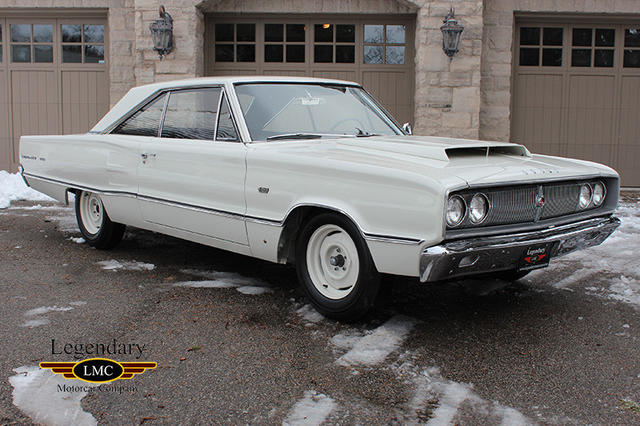 1967 marked Chrysler’s return to the NHRA scene after taking the prior year off due to Ford’s tube chassis cars with fiberglass bodies. The Super Stocks they produced were the RO23 Belvedere, and the WO23 Coronet 440. Production Numbers for these special performance package Mopars were supposedly limited to just 55 total factory produced to satisfy the NHRA. All Super Stocks were of course finished in plain White when leaving the factory, with most of the cars being repainted shortly after being purchased.

This 1967 Dodge Coronet 440 “Super Stock” Hemi was special ordered from Reseda Dodge of Reseda, California, and was scheduled for production on February 12, 1967. It has seen only 19,521 Original Miles, being well cared for and loved its entire life. With only a total of 55 built and only 24 known to exist today, it's very difficult to find a true Factory Super Stock that hasn't been cut up, caged or tubbed. The car has benefited from a complete no expense spared nut and bolt rotisserie restoration to the highest level of detail that even includes its original factory Schrader valve stem caps. This S/S is finished in its factory White exterior, with factory Black interior. It is powered by the 426 Race Hemi with 425HP and has the TorqueFlite Automatic Transmission. Also from factory are the sound deadener and under coat delete, 15 inch rims and tires, trunk mount battery, the Sure Grip Differential, Heater Delete, Radio Delete, and Remote Control Driver’s Side Mirror. The exterior and interior show like brand new, just as it would have left the factory in 1967. Included with this beautiful Super Stock example is a book of documentation that includes a Chrysler Certicard, many post restoration pictures, and an inspection sheet by Galen Govier.

To quote Govier about this ’67 S/S after his visual inspection, it is “one of the best uncut Super Stock cars in existence”. This fully and correctly restored WO23 Coronet 440 Super Stock is an extremely rare and coveted Mopar legend. It is certainly a must have for any Mopar collector or enthusiast.