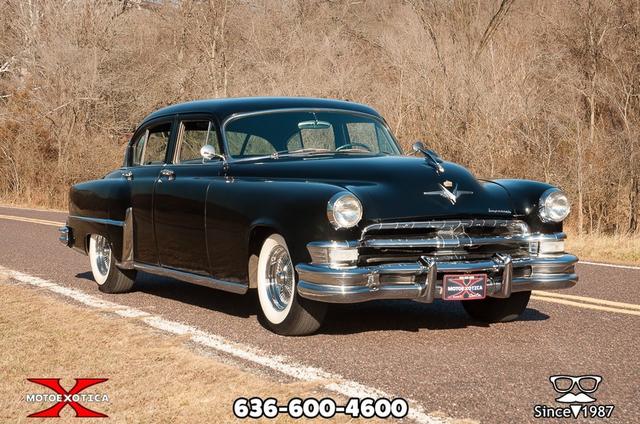 If you’re not crazy for a Cadillac and you’re not lusting for a Lincoln, would you consider a Chrysler? MotoeXotica Classic Cars hopes you would and offers this extremely rare, 1953 Chrysler Custom Imperial Six-passenger Limousine; it is one of just 243 examples made in 1953, complete with the original Presto-Matic, four-speed, semi-automatic transmission and a power-assisted, glass divider for the cabin.

This example hails from the very dry state of Utah since 2003 and was sold new in 1953 to Sidney Ring of Vista California who owned the vehicle to at least 1984 by the provided documentation of California registrations from 1957 to 1984. It was built in Detroit, Michigan on the 86th day of production in 1953 and was the 1,590th vehicle assembled on that day. Finished in black (code 1), the car’s paint and trim are in overall excellent order. Its bodywork is excellent condition, its engine bay is extremely tidy, the battery appears in good order and the car’s chrome bumpers look fantastic. Imperials had Solex heat-resistant glass, too!

This big Chrysler rolls on Remington Cushion-Aire wide whitewall tires, size L78-15, at all four corners. Each tire is wrapped around a custom wire wheel. The original wheels and factory wheel covers are located in the trunk. The tires are in good, original order while the custom wheels are in excellent condition.

You can answer the Got Hemi question affirmatively in this car for under the hood is the original 331 CID FirePower Hemi V-8. So-called for their hemispherical combustion chambers, FirePower engines were oversquare. That is, their cylinder bores were larger than their strokes. Driver convenience features included power steering and power windows. Behind the Hemi is its original, and unusual transmission, the Presto-Matic.

Presto-Matic was a special manual transmission with a fluid coupling. Although it had just two forward gears, an attached electric overdrive unit used in either gear gave it a total of four forward speeds. Attached to the transmission was an “underdrive” with a reduction gear of 1.75:1. The shift lever was column-mounted and had three positions: Low (in the “2nd” position of a conventional three-speed manual unit), High (in the “3rd” position), and Reverse (same as the three-speed). The driver had to depress the clutch pedal every time he moved the gear shift lever.

For Presto-Matic to work without gear clashing, it contained a freewheeling device (in Underdrive, Low and High), and the owner’s manual cautioned drivers not to use first or third gears when descending hills, because there was no engine compression braking in those ranges. Generally, most drivers started in High and accomplished the shift to direct drive somewhere between 13 and 25 mph by releasing the accelerator pedal and waiting for the “clunk” that signaled the disengagement of the underdrive. These cars would automatically shift from High down to underdrive high when car speed dropped below approximately 11 mph. With the Fluid Drive coupling, the car could be brought to a halt in gear without releasing the clutch and would creep like a fully automatic transmission.

Inside, the car’s blue cloth interior (code 20) is in overall very good order. The front and rear bench seats are in excellent shape, while the matching carpet is in very good order. Note the cord or rope across the top of the front seatback. It was used to hang heavy coats, blankets, scarves and shawls on during winter travels. There’s even a center-mounted clock for rear passengers. the blue headliner is still firm and looks great from front to rear. The best part about the interior is that you can separate the cabin with a power-assisted glass divider. This is handy for when you have a chauffeur or someone else driving you and you want to use your phone or tablet to surf the web or check your favorite social media sites in private. The car’s three-spoke steering wheel is present, complete with its hub-mounted, 15-jewel, Moparmatic clock made by Swiss manufacturer Benrus. To wind the clock, one simply turned the steering wheel during normal driving for eight days. The wool, inner door panels and padded instrument panel, with its full array of gauges, are all in very good condition but the speedometer is inoperable at the needle. The Presto-Matic column shifter is in good, original shape and a factory AM radio completes the interior.

In 1953, the Imperial model was renamed the Imperial Custom. Although the Imperial Custom resembled the New Yorker, it had a different wheelbase, taillights, and side trim. Clean front fenders and higher rear fender stone shield set it apart from the “ordinary” Chryslers. This was also the first year for the stylized eagle hood ornament. Parking lights on all Imperials were positioned between the top and center grille moldings, a variation from the design used on other Chrysler cars. A new model was the six-passenger Imperial Custom limousine which had as standard equipment electric windows, electric division window, floor level courtesy lamps, rear compartment heater, fold-up footrests, seatback mounted clock and special luxury cloth or leather interiors. Imperial Custom sedans now rode on a wheelbase two inches longer than the two-door hardtops. Also, 1953 was the first year that the Imperial had a one-piece windshield, instead of a two-piece one. A padded dash was standard.

If you’re looking for a comfortable, big cruiser to added to your collection or if you want something from the early ‘50s that you seldom see, you could hardly go wrong with this 1953 Chrysler Custom Imperial Limousine. Do yourself a favor and visit MotoeXotica Classic Cars to check it out, today!

This car is currently located at our facility in St. Louis, Missouri. Current mileage on the odometer shows 83,526 miles. It is sold as is, where is, on a clean and clear, mileage exempt title. GET OUT AND DRIVE!!!

Note: Please see full terms and conditions listed below that pertain to the purchase of any said vehicle, thank you.

This is pretty cool, and it's in great condition!