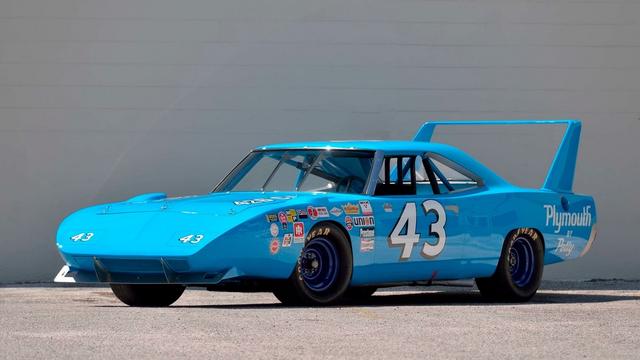 The Plymouth Superbird was only legal in NASCAR for one season, and this example is Richard Petty’s No. 43 car from that year. Drawing upon the Dodge Charger Daytona, the Superbird package was released to get “King Richard” back into a Plymouth after the team had switched to Ford for 1969. Indeed, only a midseason mishap kept Petty from winning the 1970 championship, as this car and his others scored 18 race wins and 31 top 10 finishes for him that season. Verified by its Ray Nichels chassis and original Petty construction, this car was first believed to have been the version raced by teammate Pete Hamilton until further research proved it to be Petty’s own. The restoration was performed at Petty’s Garage using original or NOS parts, with the engine built by Maurice Petty and his son, Timmy Petty. Original or NOS sheet metal inventory was also supplied by Petty Enterprises, and the car’s race suspension has been tuned by Petty’s racing staff to potentially run at 200-plus MPH on today’s superspeedways. Among the verification was identifying original, correct rivet holes in the floorboard matching 1970-era photographs. Richard Petty later hand-fabricated the arch under the shifter to match photos from 1970. Original crew members Richie Barz and Dale Inman of Petty Enterprises have visually confirmed this car as well. Under the hood of this legendary wing is a Petty Enterprises 426 Hemi V-8 engine with NASCAR intake, Holley carburetor and cowl-induction scoop. This is backed with a 4-speed manual transmission and Dana rear end. The exterior has the noted Superbird components, all painted in Petty Blue with No. 43 lettering and decals. Inside is the Nichels-built cage, taped steering wheel, Hurst shifter, tachometer, gauges and associated correct NASCAR equipment. Goodyear racing tires on steel wheels finish it off. Restored by Petty’s Garage and signed by Richard himself, this may be the most famous Superbird of all and the most notable car residing in the Werner collection. This is the single most recognized automobile in American racing history.

This has to be one of the most cool cars you can possibly own.
Whoever wins this is going to have an amazing piece of history.
Scott Moseman
http://www.TheHEMI.com/
Follow us: