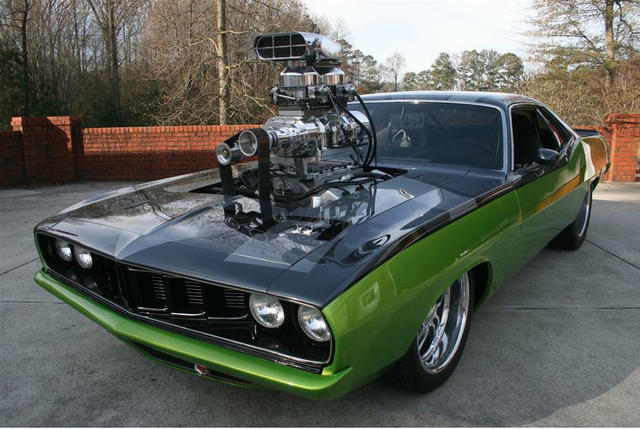 As one of the most successful movie franchises ever known, “The Fast and the Furious” series has graced the silver screen since 2001 and in that time a generation has been treated to some of the best car scenes ever filmed. By the time the fifth sequel was in the works, producers knew that they had to come up with something so special and so spectacular that it would have no equal. So it was that, when Fast Five was released in 2011, it featured a car that was so outrageous that it still exists today alongside such greats as the Munster family coach and Grandpa’s Coffin dragster as an iconic Hollywood car with no equal. Known officially as Frankencuda, this is a car that has power, looks, prestige, and an appeal that identifies with millions of movie goers around the world.

Frankencuda is the vision of renowned car designer Murray Pfaff of Pfaff Designs and custom Mopar builder Troy Brumbalow. The starting point was a 1971 Plymouth Cuda that was fitted with an Art Morrison G Force chassis and Budnick wheels and Wilwood power disc brakes. The combination of a custom fabricated chassis and excellent stopping power makes Frankencuda a surprisingly easy handling car. Of course, power and excellent handling do not entirely make a movie car, and this is where Frankencuda’s astounding appearance shines. A two-tone finish in PPG Snakeskin Green with a cartoon impressionist mural of Frankenstein covering the top makes for a dazzling display of both color and artwork. But what lies underneath beats the real heart of Frankencuda with a mammoth all-aluminum 636 cubic-inch Hemi that is force-fed through a 14:71 blower and Ultra Dominator carburetors that force all air through an intercooler. The incredible power of this engine is only surpassed by its sheer elegance and design with a polished aluminum and high-rise intake manifold that towers over the roof of the car. If the appearance alone doesn’t manage to impress the eyes the incredible sound emanating from its dual exhaust is a treat to the ears, but despite its menacing performance appearance Frankencuda runs on pump gas. The exterior color and design also carry over to the interior with leather seats complete with snakeskin inserts. A tilt steering column and wheel from Flaming River also allows a custom fit for every driver. There are also no less than three DVD screens on a custom fabricated dashboard that uses Mopar Performance gauges. A five-point harness is also fitted for safety and air-conditioning by Vintage Air ensures comfortable driving in any weather. The incredible combination of perfect paint, a monster engine, and a functional, yet comfortable interior makes for a unique car that is a pleasure to drive.

As one of the stars in Fast Five, the fifth in The Fast and the Furious series, Frankencuda is also a star in itself. The dashboard carries the autographs of several cast members including Vin Diesel, Paul Walker, Dwayne “The Rock” Johnson, and Justin Lin. Frankencuda has also been featured in Hot Rod magazine and has also graced the cover of Mopar Collector’s Guide Magazine. It has also been a feature car at the SEMA show in 2010 for K&N Filters, Holly, and Mother’s Polish. Despite its incredible looks and aggressive sound, Frankencuda is a street legal car that can be driven anywhere with power, speed, and reliability. The chance to own such a rare and exotic one-off car is perhaps as rare as the car itself. For a thrilling ride like no other in a car that’s guaranteed to turn heads, Frankencuda deserves to reside as a centerpiece of any collection of powerful cars.

This is definitely a wild build. I'm a fan of Paul Walker and (most of) the F&F series.