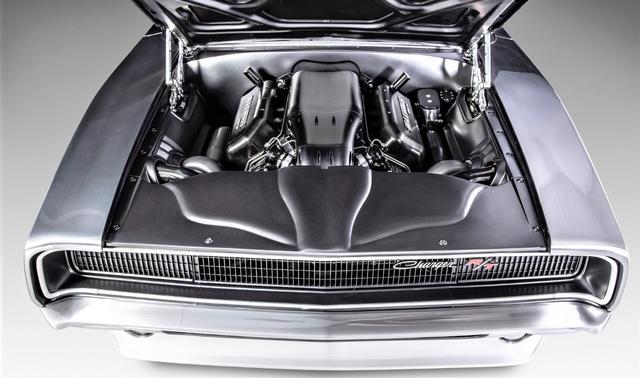 Dodge Charger From 'Furious 7' End Scene Will Be Auctioned Off
https://www.thethings.com/dodge-charger ... ioned-off/


Remember that bare-steel 1968 Dodge Charger used in Furious 7's end scene as a farewell to Paul Walker? That very car, known as Maximus The Ultra Charger, is headed for the Worldwide Auctioneers sale in Riyadh, Saudi Arabia, along with more than 450 other cars.

The same footage from Furious 7 was also used in Wiz Khalifa's “See You Again” video, and Maximus has apparently been asked to return for Furious 9 and 10, but as of now, we don't know if it will actually make an appearance.

We only caught a glimpse of Maximus in the movie though, and most of the good stuff never even made it to the silver screen. “Driven”, an upcoming Netflix car documentary about high-end automotive art also features the Charger, so that should give you a pointer as to how much time and money has gone into this thing.

The bare-metal Mopar hides a twin-turbo 572-cid all-aluminum Hemi under its hood. The engine was built by Nelson Racing Engines and produces close to 3,000 horsepower, which is almost 500 more than they actually aimed for when putting it together. The even crazier part is that the engine isn't even the most interesting part of the build.

Surrounding the incredible engine is a sheet metal masterpiece. The body has been left unpainted, only sealed with a pigment-less clearcoat to keep the steel from corrosion. According to Maximus' own website, more than 16,000 hours have gone into the metalwork alone.

It shouldn't come as a surprise that the Charger's interior is high-quality and race-inspired. Italian leather, dense German carpets, as well as sound- and heat-proofing to keep the occupants comfortable.

Seeing as us mere mortals can never afford this car, Mattel and Jada Toys have made some 1:55, 1:32, and 1:24 scale toy cars, and it has also been scanned for use in Forza racing games.

I'm a Paul Walker and Fast & Furious (before spinoffs) fan. This is a cool Charger.
I'm going to need to keep an eye out for this "Driven" documentary coming to Netflix.