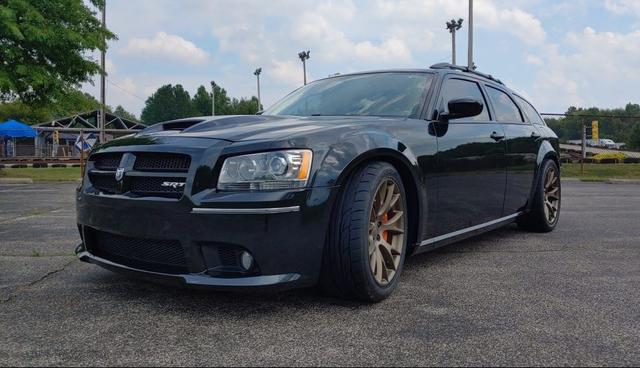 The Supercharged, Manual-Swapped Dodge Magnum SRT-8 of Your Dreams Is for Sale
Manual, rear-wheel drive, V-8 wagon bliss. All yours for just $37,000.
https://www.roadandtrack.com/car-cultur ... -for-sale/


Remember the Magnum SRT-8? It was the high-performance version of Dodge's mid-2000's station wagon. It was a cool car, but never came with a supercharger or a manual transmission. One shop solved both of those problems with this particular Magnum. The best part? It's for sale on eBay Motors right now for a pretty reasonable price.

The Magnum was built by Cleveland Power & Performance of Columbia Station, Ohio. The 392 cubic-inch Hemi and TR6060 six-speed manual transmission were sourced from a 2012 Challenger SRT donor car. Attached to the engine is a P1-SC1 Procharger making seven psi of boost. On a dyno, the car made 529 horsepower and 528 lb-ft of torque to the wheels.

The drivetrain wasn't the only thing that's been updated. The car rides on adjustable BC Racing coil-overs and OEM Charger Hellcat wheels painted in a lovely shade of bronze, wrapped in Nitto NT555 tires. They shroud Hellcat-sourced Brembo brakes painted in orange.

The car is an '06, though the shop grafted on a fascia from a later version of the Magnum from 2008. They've also deleted the rear wiper and badging for a cleaner look, and tinted the windows. According to the ad's description, they've put on 1000 break-in miles to ensure everything works as it should.

The car is currently listed on eBay with a Buy It Now price of $36,995. That's nearly double what any other SRT Magnum would cost, but considering all of the upgrades, we can understand why the shop would ask this much. It really does check all the boxes, after all.

Yes, it does check ALL of the boxes!

I'm not a huge fan of black, but everything else is perfect!
My checkbook is happy this car is not down here in Texas!!