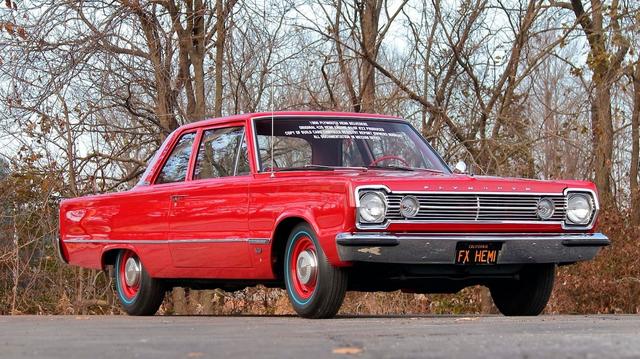 Plymouth’s plan for 1966 was to release the 426 Hemi as a street engine under engineering code A102. Prior to introducing the 1967 GTX, this engine option was basically available in any B-body platform, which is why, as per Chrysler Historical, the car here is one of a mere 22 Hemi 4-speed combinations produced on this body design in 1966. This post-coupe release was the package selected by most drag racers, the basic “all motor, no fluff” appearance that immediately identified the owner as a serious player. Beneath the non-descript hood is the 426 Hemi V-8 engine, which had been only mildly detuned by the factory from its racing roots with two inline 4-barrel carburetors, slightly lower compression, a heated intake and special exhaust manifolds. Where this car is unique is the selection of the A833 4-speed manual transmission, which in this instance is backed by a 3.54 final axle ratio. Stealth or not, the car is visible with its bright red exterior and a matched red interior. The inside features cloth-vinyl bench seating, retractable seat belts, the light package, Plymouth Transaudio pushbutton AM radio and the factory floor shifter. Beyond the red paint, the exterior has mild chrome accents, the large chrome bumpers, Belvedere I identification and small “fair-warning” 426 Hemi front fender badges. This Plymouth has a lightweight steering box as well. Riding on body-color steel wheels with hubcaps and blue-streak tires and spare. Among the provenance included in this sale will be a copy of the broadcast card, a Chrysler Registry Report, the large factory service manual and a Plymouth Hemi promotional booklet, as well as vintage “Car and Driver” and “Motor Trend” magazines. Perhaps of all 1960 muscle cars, the Hemi established the most visible legacy of raw performance. This scarce 4-speed example from its inaugural year, in an attractive color combination and with associated paperwork, is a great way to experience that heritage.

Killer HEMI and 4-Speed combo in a very unassuming package! The way I like it.
The only thing I dislike is the amount of red. I would want maybe a black interior.