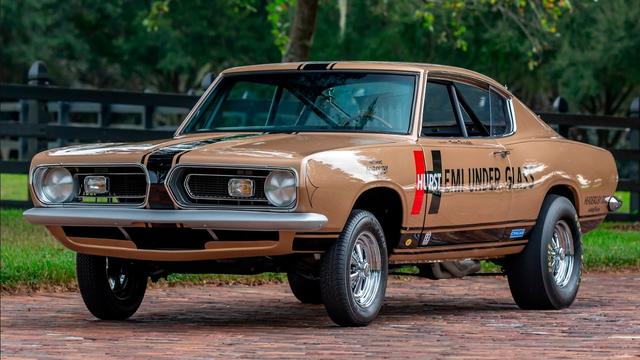 Plymouth restyled the Barracuda for 1967, prompting Hurst Performance Research to build a brand new Hemi Under Glass wheel standing exhibition car for the 1967 season. While the 4-speed manual transmission was still part of the setup, the decision was made to switch to fuel injection and alcohol. One of the highlights of that season was a Hot Rod-sponsored trip with Bill Shrewsberry, Connie Swingle and their exhibition cars to Mexico City, where they introduced the locals to the joys of wheelstanding prior to the running of the Mexican Formula One Grand Prix. At the end of the season, Hurst decided to once again build a new car so the 1967 car could be dedicated to the show circuit. It eventually disappeared, but in the mid-1990s a young man approached Bob Riggle at an event, claiming to know its whereabouts. Riggle was skeptical, but invited the gentlemen to return with whatever documentation he had. Two months later, he showed up with photographs of the car at its home in Montreal. It had fallen to neglect but there was no doubt about its authenticity. Riggle made an offer, and soon afterward was towing the remains back across the border to his shop in Arizona. It took almost 8 years before he began the car’s restoration for Bill Sefton, but both Riggle and Sefton claim it was worth the wait. “There is a lot of work in this car,” says Bob, “I’m real proud of what we did on it and how we got it done.” Collector Sefton is equally pleased: "That car is beautiful, probably better looking than when Bob drove it new." Following the restoration, Riggle and Sefton campaigned the car at exhibition events over the next few years. The car was always well-received by the public who was beckoned by memories from the late 1960s when the cars debuted as part of Hurst's promotional campaign. Today, this original Hurst Hemi Under Glass Barracuda exhibition wheel stander driven by Bob Riggle presents an opportunity to obtain an authentic piece of drag racing history. In addition to its many public exhibitions with Riggle at the controls, the 1967 Hemi Under Glass was also on regular public display at the NHRA Motorsports Museum in Pomona, California.

I hope this amazing piece of automotive history finds itself a really good home.
(I could offer my garage, if someone needs a place to keep it after buying it...)