Discussion of the Marine / Industrial Hemis. 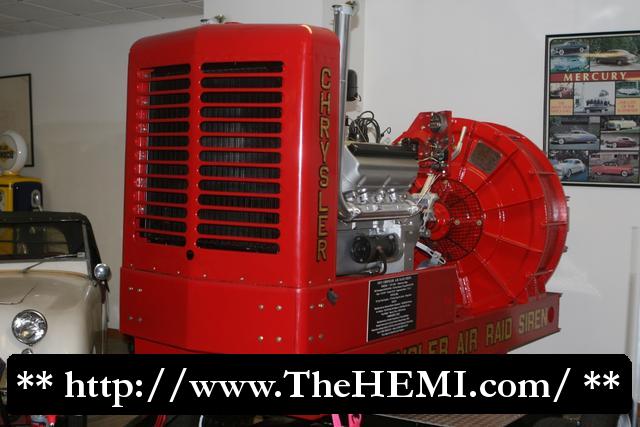 
You like the sound that a Hemi makes, don’t you?

But there’s one Chrysler product whose Hemi-generated sound you didn’t want to hear EVER….unless it was “just a test.”

Detroit was called “The Arsenal Of Democracy” back in the day, for the facilities that produced the hardware needed to win World War II. In fact, that term was first used to describe Chrysler itself, and the term later included everything in or near the city of Detroit (including all the Blue Oval The General’s facilities…and those of Everbody Else In The Car Biz Back Then).

Once the Soviet Union exploded its first atomic bomb in 1949, there was LOTS of panic…as in “When are the Russkies gonna drop The Big One on US?”

Ma Mopar was already in the air raid siren business by then, so the crew at their M&I (Marine & Industrial) Division set out to come up with the ultimate siren…The Chrysler Air Raid Siren, which it introduced in 1952.

Powered by a 7.6:1 compression, single-two-barrel-carbureted, 331-inch Hemi with “Chrysler Industrial” valve covers, that thing was LOUD when it was fired up and the siren engaged.

How loud? How about up to 138 decibels within ten feet of the business end (the other end away from the Hemi and its huge radiator)!

With that kind of Hemi-powered loudness, these air raid sirens could be heard as far away as 20-25 miles.

You folks in/around Chicago might have heard an other-than-testing sounding of them in the fall of 1959, when the White Sox won the American League pennant. Chicago Mayor Richard J. Daley ordered all air raid sirens on the South Side (his home turf, as well as the Sox’) to be blasted in celebration, once the Sox clinched. There were a bunch of them on fire station rooftops on the South Side, and were they ever heard! (Spooked ‘em on the North Side, it did!)

Produced by M&I from ’52 to ’57, when these sirens started coming out of service starting in the ‘60s, more than a few of them had their Hemi engines removed and re-installed in dragsters and altereds—both gas and fuel--for dragstrip duty. (The supply of engine-donor ’51-’58 Chryslers and Imperials in the boneyards was getting pretty slim by then.)

A few of those old sirens have been preserved and restored, like this one that’s on display at the Don Garlits Museum of Drag Racing just outside Ocala, Florida. It’s not just a static display—Big Daddy takes it out and fires it up at some of the events that take place on the showfield next to the Museum. (It must scare the beejeeebers out of some folks nearly on I-75!)

Want to find out more about these Hemi-powered screamers? Check out http://www.victorysiren.com, which is loaded with info like Chrysler’s air-raid siren history, where these were placed, plenty of genuine Mopar tech stuff (like operating manuals)….and, on the main page, a link (“Hear The Siren”) to a bunch of sound files so you can hear what it sounds like when it starts up…and when the siren kicks in. (So you Sox fans will be ready for the next time your team wins the A.L. crown!)