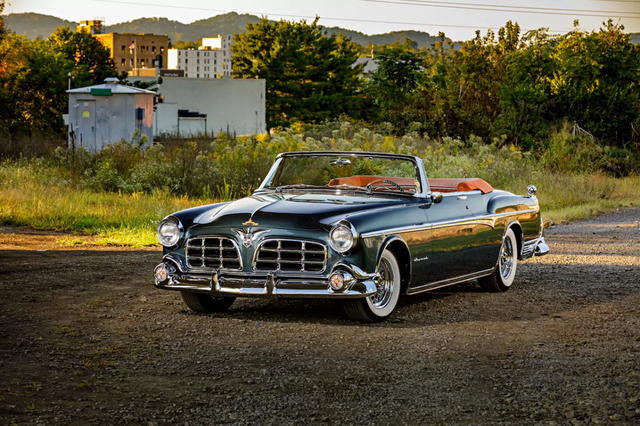 The one we’re thinking of is the prototype commissioned by Chrysler Chairman K.T. Keller. Designed and built by Chrysler Central Engineering, the concept car was created from an off-the-line New Yorker convertible. In addition to its topless body, Keller’s one-off Imperial featured numerous exterior and interior design distinctions. The end result was stunning, and Chrysler got some promotional use out of the prototype for about a year before selling it to a private owner.

Things took a weird, but not uncommon, twist in the ’60s as Keller’s experimental Imperial passed through several owners. By the early ’70s, the car was forgotten, parked in a used car lot in California where it was considered virtually worthless. It was eventually rescued by its current owner, Chip Loree, who discovered its identity, recognized its significance, and undertook its extensive restoration.

That’s where this story begins. Wayne Davis of Southlake, Texas, was at the Elegance at Hershey car show in Pennsylvania, where Loree was displaying the Keller Imperial. “It is probably one of the most beautiful cars I’d ever seen in my life,” he says, “so I went home and started to perfect one of my own.”

Before he could perfect one, he needed to find one. Since there were no other Imperial convertibles, Wayne had to build his the way Keller did—from other Chryslers. For the top he found a surviving 1955 Chrysler New Yorker convertible (one of 946 produced). “It had been in a restoration shop in Montana for many years and most of the parts were missing,” he says, “but everything I needed was there.” With that procured, he started the hunt for an Imperial two-door hardtop. One of his friends pointed him toward one (of 3,418 produced) 350 miles away in Odessa. Despite the fact that it had been sitting outside for a few years, it was a low-mileage, rust-free car in extraordinary condition. From those two 1955s, he was ready to create the second 1955 Imperial convertible.

Unlike Keller, Wayne doesn’t have the entire Chrysler Corporation at his command. What he does have is an impressive personal shop where he builds and maintains an extensive collection of street rods, classics, muscle cars, and sports cars. Even so, for a project this ambitious, he turned to a professional designer and some professional shops. Eric Brockmeyer took Wayne’s ideas and converted them from imagination to illustration. MC Auto Creations in Ferris, Texas, continued the conversion, removing the Imperial hardtop and transferring the folding top structure and windshield frame from the New Yorker.

The build moved from Texas to Tennessee when Wayne contacted Mike Rutter at Rutterz Rodz in Bristol. He had seen what Rutterz had done with Doyle Thomas’ 1964 Fairlane and 1951 Ford and knew they could do the same with his Chrysler.

The idea wasn’t to build a replica of the Keller Imperial but, like Keller had done, to build a car that reflected the ideas of its owner. With the exception of the top, bodywork was intended to perfect the sheetmetal—and the seams and gaps in between. The headlights and “gunsight” taillights are stock. The emblems and trim pieces are intact, freshened with new chrome at Dan’s Polishing Shop. The flat glass wears OE green tint. Auto City Classics provided a repopped New Yorker windshield.

Paint color was critical and Wayne said the idea was “to go rich and elegant and ’50s.” He eliminated the standard reds, blues, and blacks in favor of custom-mixed Imperial Hazel Gray Metallic. Some people were skeptical of the color during the initial build, he remembers, but when Mike Rutter finished shooting the car using Spies-Heckler paint, it was obviously the perfect choice. The Kalahari top, popular on Corvettes, is a beautiful contrast.

Wheels and tires were chosen for a stock appearance. That was easy, since wire wheels were a signature on most Imperials in 1955 and would have been wrapped in whitewall rubber. The Wheelsmith supplied the 16×8 Chrysler OE-style wheels and caps. Mirada tires from Diamond Back Classic Radials measure 245/70R16 and 235/60R16.

The interior, like the exterior, keeps the original Imperial flavor but heats it up with plenty of Kalahari-colored leather upholstery from Paul Atkins Interiors. The original power-operated front bench, custom rear bench, and door panels are stitched with a mildly modified version of the factory design. The outer edges of the two-tone dash were painted to match the seats and the convertible top. Classic instruments rebuilt the 1955 gauges to appear stock but with up-to-date technology. A one-off Flaming River tilt column was designed specifically for use with the 1955 Imperial steering wheel, restored by Quality Restorations in San Diego. The rare 1955 Chrysler Town & Country radio was upgraded with Bluetooth and iPod/USB connections by R&B Vintage Auto Radio in Mt. Joliet, Tennessee. Below the radio is an RCA Victor Model AP-1 record player. Amps and speakers are from Memphis Audio. Cool air comes from a Vintage Air Gen IV system. Chrysler switched to a 12V electrical system in 1956, so Wayne’s Imperial had to be converted. Rutterz Rodz wired the car using a Painless Performance Products harness.

To beef up the chassis for the convertible conversion, the X-brace from the New Yorker was transferred to the stock Imperial framerails. An Art Morrison Enterprises Sport IFS clip was grafted in place. With beefy 1-inch-diameter tubular control arms the AME package is designed for aggressive handling. The frontend was completed with Wilwood Pro 2-inch drop spindles, an AME antisway bar, and JR1 coilovers. A power rack from Flaming River controls steering. In the rear, Strange Engineering axles and a Dana 60 with 3.70:1 gears and limited slip are suspended by new OE-style leaf springs and Bilstein shocks. Stainless steel brake lines plumb the Chrysler dual master cylinder to front and rear Wilwood 12-inch disc brakes.

Wayne’s Imperial was originally equipped with Chrysler’s first generation FirePower Hemi engine. Rutterz Rodz replaced that engine with a new 485hp Chrysler SRT-8 engine built by Bouchillon Performance. If you’re wondering why this 392 Hemi doesn’t look like the one in your Dodge Charger, it’s because it’s been (thinly) disguised to resemble the 331 it replaces. The original 1955 valve covers were modified at Rutterz Rodz to cover the SRT-8 heads. The original air cleaner was likewise modified (and matched with a fabricated induction system) to camouflage the modern engine. A custom exhaust system by Rutterz Rodz uses 2-1/2-inch mandrel-bent pipes and a pair of Flowmaster 50 Series stainless steel mufflers. Bouchillon Performance built the front accessory kit. The Brice Thomas aluminum radiator and Flex-a-lite dual electric fans are covered in a custom shroud. The original dash-mounted shifter was converted to control the Chrysler 545RFE automatic transmission, built by Bouchillon Performance. A Bowman Driveshaft custom one-piece driveshaft links the trans to the rear.

The Imperial made its debut on the show circuit in mid 2016, racking up honors at every stop. When they came to the 2017 Shades of the Past show, Wayne and Mike didn’t plan to go home with the Best Street Cruiser award in the STREET RODDER Triple Crown of Rodding presented by Painless Performance Products. “I came with no expectations at all and was hoping to get selected as a Top 25 winner,” Wayne told us afterward. “It was a pleasure and a shock to win.”

Wayne drives all his cars and already has road trips planned for his incredible Imperial. After all, it’s not called Best Street Cruiser for nothing.

Wow, what an amazing Imperial ragtop!