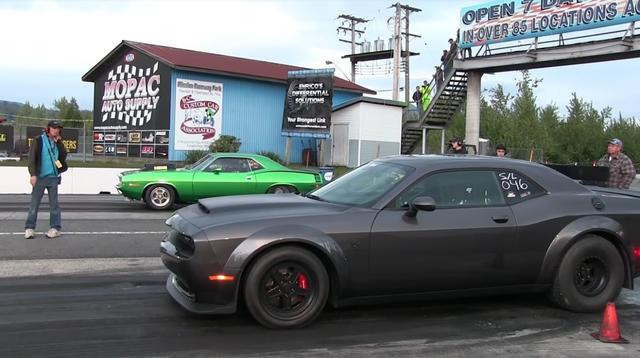 
Once again, it’s a Dodge Demon defending its honor as king of the drag race against an upstart 1970 Plymouth Barracuda.

But this Cuda is packing a big surprise.

We should note that this particular Barracuda is one that we’ve seen before. Last time it was racing against a Japanese race bike and posting some ridiculously fast numbers -- 9.5 seconds to the quarter-mile, to be precise. That already beats the Demon’s well-advertised 9.65-second race time.

We didn’t know how powerful this Plymouth was last time but we were given an estimate of 1,000 horsepower. It looks like the owner might have stepped on a dynamometer in the last little while because the video description from Wheels now quotes it at putting out 925 hp from its 7.0-L (426-cubic-inch) HEMI V8 engine.

Which is also better than the Demon’s 840 horsepower. The Barracuda is also likely a lighter machine as it’s physically smaller and comes with fewer standard features than the Demon.

However, the Demon does have modern hardware on its side, and several drag-race specific tricks like torque reserve, trans brake, and an after-run chiller. Depending on the options chosen by the driver, it might also have air conditioning and cruise control.

But back to Mission Park Raceway, where the first race is given to the Demon by default. You can see the Plymouth driver is a little too eager to get going and has a false start. They sneak past the line before the lights fall which disqualifies themselves. Even still, the Cuda still manages to beat the Demon by starting late, with the Demon posting a time of 10.36 seconds at 134.42 mph.

It’s the second race that will really matter. We’re not going to spoil the results, but we’ll just say that the Cuda doesn’t have a bad start this time, and even the Demon roars off the line so hard that it winds up bouncing its front axle for the first few moments of the race.

And man, if those enormous tires on the Cuda don’t seem to grip no matter how hard it pulls. That car might as well be a sled puller.

I don't think watching drag racing action gets much cooler than this kind of match-up!