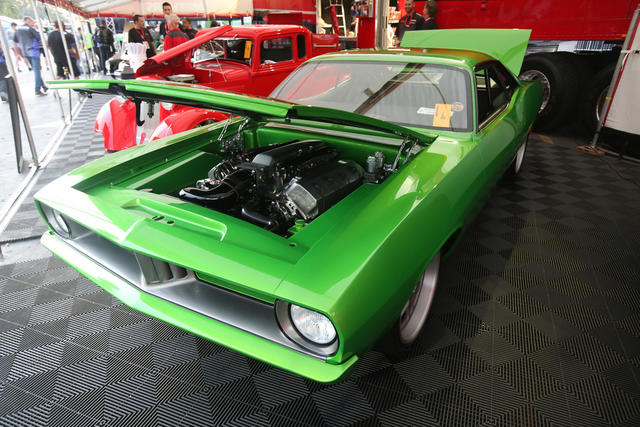 SEMA has some incredible cars to see, even if you can’t get inside
https://www.hagerty.com/articles-videos ... get-inside#


he Specialty Equipment Market Association (SEMA) hosts one of the largest yearly conventions in Las Vegas. Even though SEMA is far more than just a four-day convention, the SEMA show has been so big, for so long, that any mention of “SEMA” automatically leads your mind to the massive displays and new feature vehicle debuts in the desert.

Even though the Las Vegas Convention Center is huge, the SEMA show spills out of the center’s halls and into the open air, where hundreds of vehicles are on display. So while you do need a pass to get into most of the booths, if you happen to be in Las Vegas, you may want to hop off the Monorail and take a peek at what’s on display for everyone to see.

The Mothers booth is another spot outside to check out some of SEMA’s top builds. Right next to a striking red 1972 Chrysler Valiant Charger, Mopar muscle from Australia, is the 1972 Plymouth ‘Cuda built by Campbell Auto Restorations. We’ve seen this car in many stages of its construction over the past several years and it’s amazing to see it finally completed. It features leather-wrapped upholstery over hand-formed aluminum door and interior panels for a classic muscle car look that isn’t too modernized. It’s powered by a fuel-injected Gen-II Hemi and a manual transmission.

There are several custom modifications on the car, which rides on an Art Morrison chassis, many of them hard to pinpoint. The most significant is the stretched wheelbase. Now with a longer wheelbase than its Dodge Challenger E-body platform mate, this Cuda’s front wheels were pushed forward 2.5 inches while keeping the same overall length. Unless you really know your classic Mopar muscle you might miss it, but it makes for interesting proportions that make the ‘Cuda look lower than it already is. 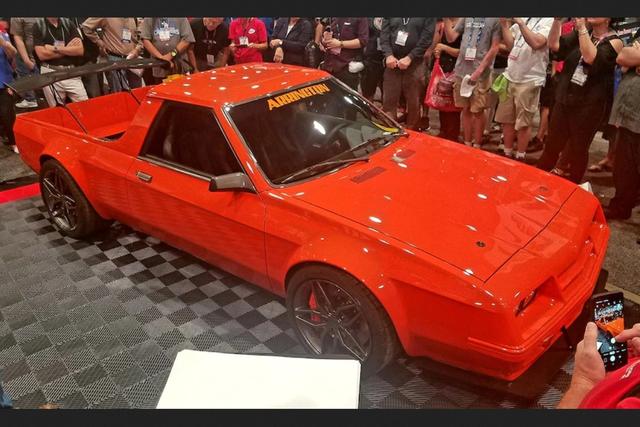 
Every year at SEMA, car builder Mike Copeland brings something unique to unveil at the show. In recent years, he’s had a decidedly Mopar flavor, and in keeping with that Pentastar tradition, for the 2019 SEMA edition, he showed up at the Redline Lubricants booth with a 1984 Dodge Rampage that has been “slightly” modified.

In what could be considered a fairly ambitious 10-week build timeline, “Outrage” was actually a project that Mike had been planning for many years. It all came down to finding the right donor, and this one was originally owned by a little old lady from the Northwest—and wore an oversized camper top.

Mike and his crew cut out the bottom of the Dodge and installed a modified Factory Five chassis that has been lengthened and narrowed to accommodate the original Dodge wheelbase. Sitting in the middle of that chassis is one of his Arrington-built 392 Hemis cranking out 650 horses. It wears Borla 8-stack injection and is controlled by a Holley Dominator EFI ECU. The headers are from Kooks, and are actually an LS turbo design that was modified with Hemi flanges. The 6-speed manual transaxle is from Mendeola Transaxles and has been mated to the Gen 3 with a modified ATI adapter, which is fitted with a custom clutch that was built by Centerforce Performance.

At all four corners, the diminutive Dodge wears Baer XTR 6-piston calipers and 14-inch rotors that have been engulfed with Forgeline custom wheels measuring 18×10 at the front and 18×11 at the rear. The tires used are BFGoodrich G-Force Rival S 1.5 and lie under custom-made steel wheel flares.

The interior was treated to a mix of suede and leather on the surfaces, while the exterior has been given a bath of Dodge Pumpkin Pearl with 40 percent more pearl added. Mike has built this car as a driver, and plans to do just that—drive it!

You can't say you see too many of these trucks anymore!