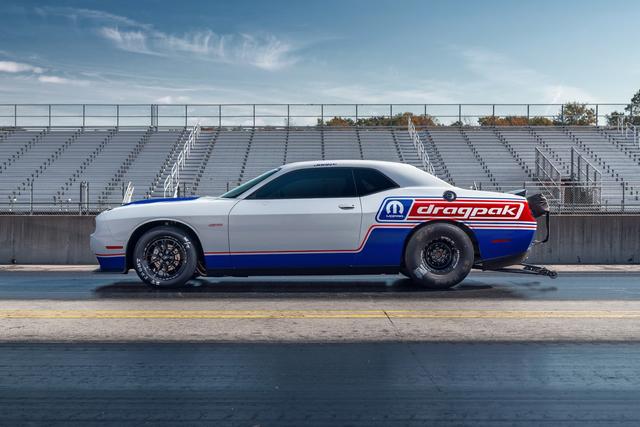 
Construction of the Challenger Drag Pak begins with a standard-width Dodge Challenger Body-in-White (BIW) unibody built at the FCA Brampton Assembly Plant in Brampton, Ontario. An SFI-specification welded rollcage, rated for quarter-mile runs as fast as 7.50 seconds, is integrated into the body.

New for the fourth-generation Mopar Dodge Challenger Drag Pak, the Strange rear axle assembly uses adjustable coilover shocks, four-link suspension with wishbone and an anti-roll bar. Wheelie bars and a parachute mount are integrated into the chassis and are standard.

Very cool to see a new Drag Pak! Was hoping for an ACR, though.


When Mopar introduced the newest Challenger Drag Pak back at the 2019 SEMA Show in Las Vegas, the biggest question that went unanswered related to the size and type of supercharger that would top the 354-cubic inch Hemi engine.

We asked Mopar representatives at SEMA which supercharger would be used in 2020 and they explained to us that their team was still testing a few different superchargers to see which yielded the best results. This was likely one of the reasons that the Drag Pak on display in Vegas had padlocks holding the hood shut, as whatever was under that hood may not have become a production reality.

Back then, the folks from Mopar wouldn’t offer any insight into which superchargers were being considered, but our connections inside of the company confirmed that units from Whipple, Magnuson and IHI were being considered. We expected that the IHI would be chosen, allowing the Drag Pak to utilize a similar supercharger to the one featured on the 1,000-horsepower Hellephant crate engine. Our contacts stated that in early testing, the IHI was showing strong results, but there has still been no official word from FCA, Dodge or Mopar.

We also do not yet know the base weight for the 2020 Drag Pak, but we expect that it will be similar to the current base weight of 3,500 pounds.

Again, this information is not official from Mopar, but the charts here showing the details are from the official rules of the NMCA for the 2020 season.

A big thanks to Rich S. for the heads-up on this information!

Some additional information on the 2020 Dodge Challenger Drag Pak!