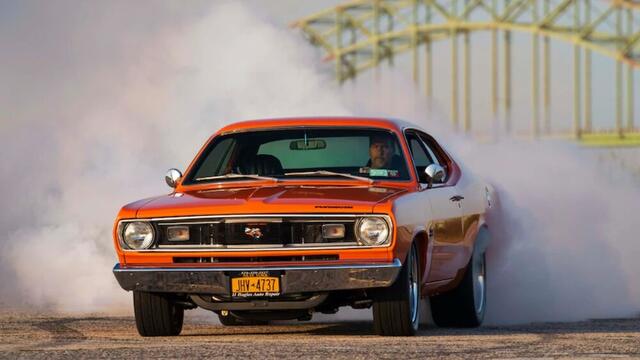 
When New Yorker Tom Houghton turned 16, he got his junior license. The year was 1981, a particularly rough time for hardcore Mopar enthusiasts. Pentastar muscle car lovers had to look back almost ten years for something that would jack their pulse rate up. Fortunately for Tom, his neighbor had a 1970 Duster for sale, and by sheer luck it was one of the 24,817 1970s equipped with a 340 engine.

"But it was even better than that," Tom tells us, "because the neighbor who owned the car had, at some time in the past, swapped in a 1970 440 Six Pack engine!" Not surprisingly, Tom and his big-block-powered Duster were inseparable during his teenage years. "I drove it back and forth to high school during the week, to Westhampton Speedway on weekends for grudge races with friends, on my very first date, and pretty much everywhere in between," he recalls with an ear-to-ear smile playing across his face.

A couple of years into his ownership, Tom decided that he would modify the car for racing. He stripped it down, removing a lot of trim items and other superfluous things, in order to get weight out of the car. As expected, it did get faster because of the diet plan, consistently running in the low 12s, but as so often happens, after racing it like that for a while Tom got accustomed to the increased speed and decided to do what he could to get it to the next level.

"I felt that I could make the car into a real competitor," he says, "and started by spending what money I could on engine modifications."

With a fresh round of engine upgrades done, Tom clicked off an impressive 11.97-second pass in his first attempt, which was fast enough to necessitate the installation of a roll bar.

"After my very first run with the upgraded engine," he remembers, "I was in the staging area when the track officials approached me and told me that I would need a roll bar if I wanted to continue racing."

Tom immediately began thinking about where and when he could get a bar installed, but as he began to drive out of his staging lane, dejection instantly turned into defeat.

"Unbelievably, just as I went to pull out of the staging area, my engine stopped running because it had spun a bearing! That was really terrible."

The bearing failure occurred in the summer of 1983, and with no viable alternative, Tom put the car into storage until he could come up with the time and money to fix it. He knew it would take a while, but had no idea his beloved Duster would remain entombed, undriven and untouched, for the next 27 years. It might still be gathering dust there if Tom's children hadn't motivated him to resuscitate it. He says, "In 2010, after about 27 years of storage, my son Tom Jr. and daughter Haley pushed me to get it back on the road. With their encouragement and strong support from my wife Diana, the car was awakened from its long hibernation. In thinking about how to proceed, I decided to use a modern motor instead of attempting to rebuild the 440 Six Pack, and to upgrade the suspension, brakes. and steering, to enjoy the advantages of modern-day power and to make the car more drivable."

With a plan for the build in place, Tom and his children got the project going with their own sweat equity. "Together, we took it completely apart, bagging and labeling each nut and bolt."

Following disassembly, the body shell was sent out for sandblasting, and then it went to II Eagles Auto Body & Collision Repair in New Hyde Park, New York. Tom says, "I had complete confidence in John Rossi, the owner of II Eagles Auto Body, and his staff, including manager Joe Tesoriere, bodymen Hector, Fazil, and Jose, and mechanic Joe Intravaia. I also had invaluable help from my friend, Sal Buttafucco, who's a very skilled metal worker and painter."

The buildup of the car over the next eight-plus years was truly a collaborative effort. II Eagles did most of the bodywork and masterfully applied the eye-popping Orange Crush paint finish. "The body was on a rotisserie," explains Tom, "and besides perfecting all gaps and making every surface flawless, a lot of subtle modifications were done. Some of it was for looks, and a lot was done to fit the Gen III Hemi engine and transmission in the car. Being that this was something that very few, if any, people had done before, there were plenty of issues that had to be solved, but a unique solution was found for each problem."

With some help from Intravaia and Tesoriere, Tom and his son did most of the mechanical work. They installed the 2015 392 Hemi, sourced from a car that was totaled by an interior fire, a Tremec T56 Magnum six-speed, and an 8 3/4 rearend, which was built by Moonlight Garage in New Hyde Park. Tom Sr. and Jr. also installed the Reilly Motorsports front and rear suspension systems and SSBC four-wheel disc brake setup. For the latter they fabricated all new lines.

Tom wanted to keep the interior almost entirely stock to preserve its nostalgic feel, so he had Phoenix Upholstery, in Franklin Square, New York, install a stock headliner and new seat covers from Legendary Auto Interiors. Auto Instruments in Martinsville, Virginia, restored and upgraded the stock instrumentation, and Ward's Classic Car Radio Repair in Huntsville, Alabama, upgraded a stock Plymouth AM thumbwheel radio to an AM/FM stereo with Bluetooth.

In May 2019, some 36 years after the spun bearing had relegated it to storage, Tom's Duster hit the road once again. The tuned 392 Hemi produces approximately 550 hp and 500 lb-ft of torque, which is about double the car's original 340, and around 40 percent more than the venerable 440 Six Pack that was under the hood when Tom bought the car back in 1981.

Predictably, Tom adores the formidable power, but he's equally in love with the car's total performance envelope. "The brakes are as good as any modern performance car, and I can't say enough good things about the Reilly suspension," he tells us with delight. "It delivers excellent handling and ride quality, and Bill Reilly was incredibly helpful during the build."

Given how old he was when he bought this Duster and how long he's owned it, the car understandably elicits strong emotions from Tom. "I've loved this car for a long time, and now it's truly one-of-a-kind, but the best part of the whole experience has been sharing it with my family. I cannot thank my children enough for giving me the initial push to get the car going again, and I can't thank them and my wife Diana enough for being with me each step of the way, even when I felt like quitting. They helped me bring back to life something that means a whole lot to me, and I simultaneously got to teach them about something I am very passionate and knowledgeable about."

Check out that engine bay. What a super clean Gen III HEMI swap!