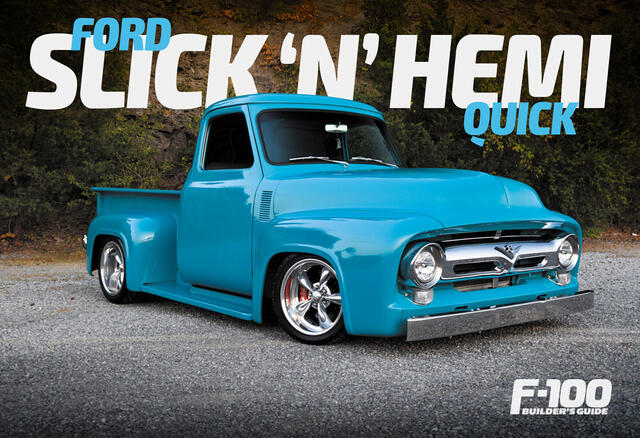 It’s a story we’ve heard before about this ’55 Ford F-100 named Ford Slick “N” Hemi Quick. When you’re at a receptive time in your life and you visit an absolutely overwhelming event, the results can be predictable. It’s not surprising that you come away with an indelible impression that can shape your future.

Kriss Crutcher, from Ooltewah, Tennessee, is a medical lab technologist and remembers exactly when a specific event influenced his future. It was the day he got bitten by the car bug. He and his friends were visiting the 1988 Grand Rod Run in Pigeon Forge/Gatlinburg, Tennessee, and he recalls the unique feeling of being swept up into automotive overload. Of course, the gathering of a couple of thousand vehicles in one place is impressive enough, even for a lifelong enthusiast.

Among the thousands of vehicles on display, the ones that really got his attention were the hotrod versions of Ford Deuce Coupes. It planted a seed, and he began dreaming about getting behind the wheel and piloting his own unique ride.

Later that year, his friend’s father was selling his ’54 Ford F-100. At first, Kriss wasn’t impressed with the looks of the truck, still thinking about a hotrod Ford. But tastes change and the idea of a personalized pickup began to grow on him. About the time he made up his mind, the truck was sold. Now, more clearly focused, he began a search in earnest, and it didn’t take long for him to find another, this one a trade-in at the local Toyota dealer.

Unfortunately, at age 16, Kriss was too young to get behind the wheel so his father drove the truck home, later remarking that the imprecise steering of the vintage ride was terrifying. That was the beginning of a continuing work-in-progress that’s lasted for three decades and is still going strong today.

What sets this truck apart from the majority of conversions is the attention paid to the suspension and the choice of a unique powerplant. Even at an early age, young Kriss had a good idea of how he wanted the truck to turn out.

“I got most of my ideas from attending shows and looking at truck magazines,” he recalls. “I wanted to incorporate ideas and components on my truck that were different from everyone else.”

Since a rigid chassis allows the suspension to properly react, one of the first upgrades was boxing the F-100 frame. The archaic Ford front suspension was scrapped and replaced with a considerably more sophisticated (for the times) Chrysler Córdoba torsion bar frontend utilizing a Gibbon cross member kit.

Even more unique is the addition of a C4 Corvette independent rearend, chosen for both its performance and the fact that it is a visual standout with its single transverse leaf spring, sway bar and Bilstein shocks. With the four-wheel independent suspension in place, modern six-piston disc brakes from Wilwood were added up front, featuring 13-inch rotors. Factory Corvette disc brakes in the rear team up to ensure the ultimate in modern clamping pressure.

The heart of any restomod is the powerplant and, once again, Kriss opted for a departure from the standard Ford FE family. “To me, the HEMI motor has always been the ultimate hotrod engine,” Kriss says. “Plus, it fit perfectly in the large engine bay of the Ford.”

His 392 V-8 was sourced from a ’58 Chrysler Imperial and was as showy as it was powerful. A series of upgrades was accomplished before the engine ever made it to the truck. Bored .30 over and running Ross aluminum 10.5: 1 racing pistons, the motor was off to a great start. Handling the air/fuel mix began with the hot heads dual plane intake and a Holley 750 Dominator carb, built and custom tuned for the motor by Sean Murphy Induction.

The free breathing, high flowing aluminum heads were purchased from Hot Heads in North Carolina and were more than 70 pounds lighter than the stock originals, adding extra performance two ways.

Dressing the engine began with Hot Heads alternator and power steering brackets that were adapted to fit. With characteristic ingenuity, Kriss modified a 2-inch wide cog belt to run a water pump and alternator originally designed for a big block Chevy, smiling when he says, “It gives the truck a nice blower whine!” A new oversize Griffin radiator keeps temps in the green.

The package sends a solid 500 hp to the modified 700R4 trans and shift kit. A Dana 5-inch aluminum telescoping drive shaft from an Isuzu Trooper spins the Corvette independent rear. Surprisingly, the shaft exact fit and didn’t need to be cut. Paint, polish and a mirrored firewall were the final dressup touches to the engine room. One of the final selections to the powertrain was the wheels, always critical to both looks and performance. Kriss chose Boyds Smoothie 111s, 17×8 up front with 18×10 in the rear.

The truck’s rejuvenation effort, the vintage ’55 F-100 Ford was powerful and cornered like it was on rails. That meant that Kriss could turn his attention to cosmetics. At first glance, the overall respect for the iconic Ford lines can’t be denied, but there are some unique touches that may escape the casual observer.

The rear fenders are 3 inches wider to accommodate oversize rubber, running boards were smoothed. Kriss filled the seams on the cowl, but for a nostalgic touch, left the louvers and vent. Door handles shaved to for hood to close properly, and Kriss created his own hinges, incorporating modern gas struts. The Pro’s Pick smooth tailgate features hidden hinges, rounded stake pockets and smooth rear pan. Rear bumper eliminated to provide a better view of the distinctive Corvette independent rear.

The effort was certainly worth it since the flawless House of Kolor Turquoise with basecoat Kosmic Klear coat is now a definite head turner. The same level of care was devoted to the interior, beginning with the contoured bench seat, custom made by C&C Enterprises and accented with the roof and door panels from Rod Doors.

The dash is a mixture of old and new with Dakota Digital gauges sharing space with the original Ford knobs and even the vintage Ford heater. The push button start on the dash along with the oversize Auto Meter tach however, underscore the modern upgrades and aggressive performance capabilities of his truck.

No quick weekend project, this truck has been an ongoing adventure since 1990. Although he describes it as virtually complete, Kriss says there is still work to be done. Thanks to his attention to detail and unique choices, however, this vintage F-100 Ford has already won three Best of Show trophies while it was still being refined!

“Part of the fun of this truck is discussing it with spectators,” Kriss says. “When one guy asked what kind of mileage the HEMI got, I guessed about eight. He said you better have good brakes because you’re going to be stopping at every gas station!”

Although Kriss has plans over the winter to update even more elements on his lifelong hobby truck, redoing portions of the interior and adding a big honkin’ Mooneyham 6-71 blower to the HEMI! Clearly, he sees the build process as part of the fun! He sends special thanks to all the friends and family who helped along the way, creating his one-of-a-kind, high-performance, trophy winner.

I really like the name! Great looking truck, and he picked the right engine!